Last September the Duchess of Sussex, Meghan Markle, guest-edited Vogue magazine in a special edition of the style bible. Now, a video from her time working on Vogue has been posted on Instagram. However, the release of this insightful footage has been met with criticism on Good Morning Britain.

Meghan Markle guest-edited the September 2019 issue of Vogue and this special edition featured a special title: “Forces For Change”.

The edition became the biggest-selling issue of the last decade, due to the high-profile nature of its temporary editor.

Now the Duchess has shared a behind-the-scenes video from her time working with Vogue Editor-in-Chief Edward Enninful on her and Prince Harry’s official Instagram account, SussexRoyal.

The post was accompanied by an account of the filming, along with thanks to all those involved in helping bring the magazine to the shelves.

“Earlier today @edward_enninful, the Editor in Chief of @britishvogue shared: “#ForcesForChange, guest-edited by The Duchess of Sussex @SussexRoyal, was our fastest-selling issue in the history of #BritishVogue (sold out in 10 days) and the biggest-selling issue of the past decade. I can’t wait to see what 2020 has in store…

“To celebrate, we wanted to share this never before seen video behind the scenes with Edward and The Duchess of Sussex on the creation of this special issue. Please note, this was filmed last August in London.

“Congratulations to all of those who took part in the 2019 September issue, and huge thanks to those who supported and helped make this a success!”

But the release of this video drew some criticism from regular Good Morning Britain guest Iain Dale. 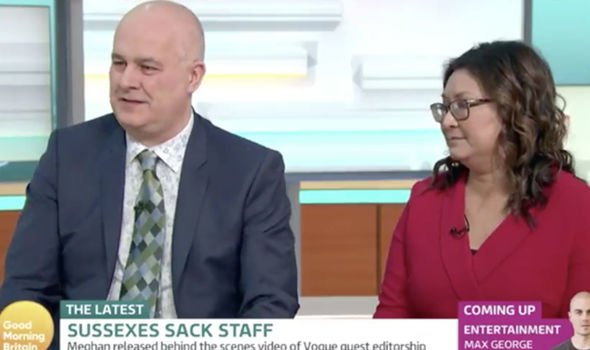 GMB co-host Ben Shephard commented: “It’s an extraordinary film to watch, from my perspective. I was watching it, going, ‘I can’t believe that this is something they would want to put out.’”

He then adopted an American accent to spoof the exchanges in the clip, saying: “You’re so wonderful.”

While he conceded it’s hardly damaging to the Sussexes’ reputation, he did suggest it breaks a certain protocol: “It’s actually harmless, I think.”

Iain, this time, remained on the set for the duration of the conversation.

Last week he walked off Good Morning Britain when he disagreed with other panellists about the effects of austerity cuts have had on mental health services.

Kate Garraway, Good Morning Britain co-host, ribbed Iain about his walkout when she introduced him to today’s show.

The Duke and Duchess of Sussex are making headlines for another reason, quite apart from the release of the video.

It’s been reported they will close their Buckingham Palace office, resulting in 15 staff members needing to find new jobs.

A source said: “While the details are still being finalised and efforts are being made to redeploy people within the royal household, unfortunately, there will be some redundancies.”

Good Morning Britain returns on ITV on Monday at 6am.