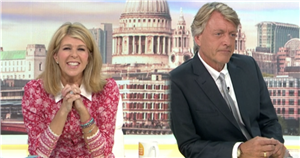 Richard, 65, has been a regular guest presenter on the ITV chatshow after Piers Morgan dramatically quit in March, following his explosive comments in reaction to Meghan Markle's interview with Oprah Winfrey.

However, viewers were left complaining over the "excruciating" episode on Thursday as they threatened to "switch off" over Richard's "interrupting" during interviews.

It comes after the presenter, who has previously been compared to comedy icon Alan Partridge, left fans divided over his presenting on the show back in June. Taking to Twitter on Thursday, one person said: "Sorry to interrupt…. No you’re not Richard #gmb," followed by an Alan Partridge GIF.

A different viewer put: "Madeley, shut up FFS! Just saying words for the sake of it now #gmb," followed by an angry emoji.

Another show watcher commented: "So is Richard 'Partridge' Madeley now the permanent replacement for #piersmorgan on #GMB? Needless to say, he keeps having the last laugh."

A different fan wrote: "Switched on #gmb, saw it's Richard and not Ben with Kate, switched off. #thatisall."

While, according to Mirror, another viewer added: "Put [GMB] lasted 2 minutes. What is with them interrupting when anyone speaks! It’s excruciating."

However, not all viewers felt the same way, and others praised Richard for being a national "treasure" and "priceless" on the show with another commenting: "You go Richard! #GMB." Elsewhere, Ben Shephard made his grand return to Good Morning Britain earlier this week, two weeks after having a nasty leg operation.

The TV presenter, 46, reunited with Susanna Reid as he continues to recuperate from a vicious football accident that left him with multiple leg injuries.

He eventually had an operation to fix a torn ACL and meniscus on top of having a fractured leg.

With his leg supported underneath the news desk, Susanna praised Ben for getting back to work despite having to sit in an awkward position.

"Hello stranger – welcome back!” Susanna beamed to her co-star, before adding: “You look slightly uncomfortable.”

Using a handheld mini-cam, Susanna then showed how Ben was sitting behind the desk – with his leg on a separate chair while looking at the camera.

But Ben remained the professional, and while he did eventually admit it was a bit awkward, he was glad to be back in business.

"I just thought, I've been off for a few weeks, I'm going to start bringing in the changes!” Ben said. “I feel like I should be able to do the show with my feet up!"