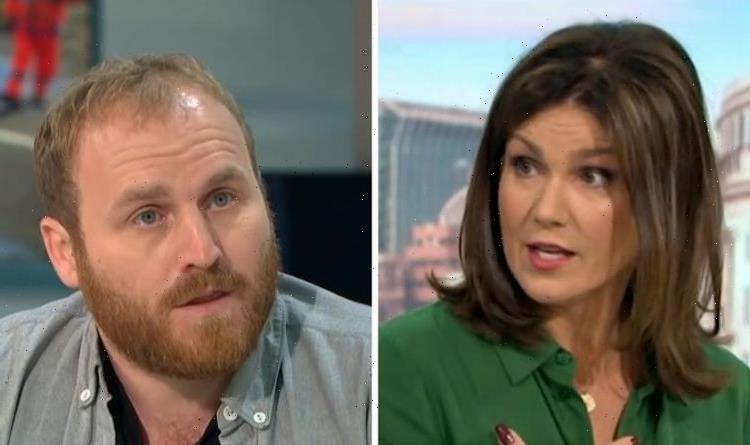 Good Morning Britain has been “flooded” with Ofcom complaints after Insulate Britain’s Liam Norton stormed out of the studio during a clash with hosts Susanna Reid and Richard Madeley over M25 activists. Liam left the tense interview after Susanna accused him of being “patronising” and Richard said he was “not taking responsibility for his actions”.

As soon as the ITV debate began, things turned tense at Susanna slapped Liam down for being “patronising” towards her.

The interview took a turn for the worst when Richard told Liam that blocking the motorways puts the lives of others at risk.

The then referred to a mother who was left partially paralysed from a stroke as she was unable to get to a hospital fast enough.

“You’re not accepting the responsibility of your actions,” Richard said at the time as Liam tried to interrupt.

With tensions continuing to rise Liam fumed: “We’ve been writing letters for 30 years.

“We are demanding the Government makes a meaningful statement to save the future of this country and if they refuse to do it then they can put us in prison.”

Standing up from his chair, he yelled: “I’ve had enough of talking to people in this country about what we’re doing. This is the state of things.”

Richard scoffed in amazement as the activist exited the studio during the middle of the debate.

Television watchdog Ofcom has since confirmed that 105 people complained about the scenes, according to The Metro.

DON’T MISS…
Michael Schumacher’s wife in tears as she gives heartbreaking update [UPDATED]
Rod Stewart’s wife Penny Lancaster opens up on singer ‘moving on’ [LATEST]
‘Why am I here!’ Phillip Schofield cut off by Gino D’Acampo [MUST SEE]

Insulate Britain activists have been continuing to cause havoc on the M25, with reports of a seventh blocking the road on Wednesday morning.

Kent Police reported some of the group had glued their hands to the road’s surface.

But activist Liam has likened criticism of the protest group to people who appeased Adolf Hitler in the 1930s during a heated row with TalkRADIO host Cristo Foufas.

He argued that Foufas suggesting the UK did not need to drastically reduce emissions was similar to “appeasers” in the 1930s who did not view the rise of Nazi Germany as a threat.

Cristo suggested the actions of Insulate Britain were “pointless” leading the activist to argue: “You sound like in the 30s people were saying similar things about Hitler.

“And what they were called where appeasers Cristo.

“Well, what they were killed were appeasers because people said Hitler wasn’t a threat.”

Good Morning Britain airs weekdays on ITV from 6am to 9am.