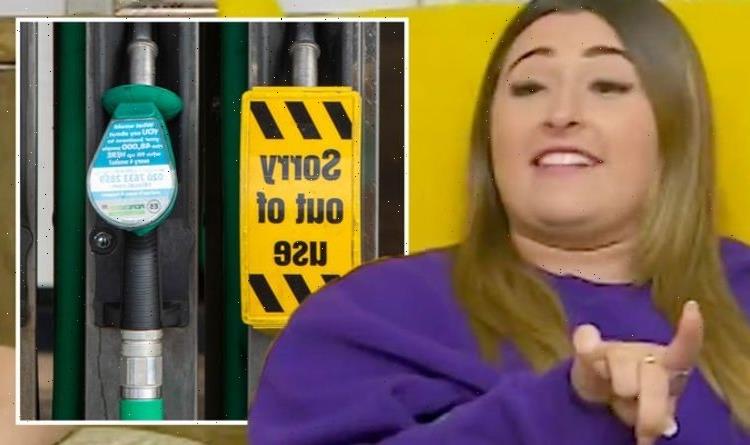 Petrol stations up and down the country have seen an influx of customers over the past week following warnings of a fuel shortage. Despite government members insisting there is no need to panic buy or place unnecessary pressure on the supply of fuel, a number of garages have been forced to close early and/or limit the amount of fuel they can allow customers to put in their vehicles. The fuel crisis has dominated the likes of BBC, ITV and Sky’s news channels and was put to the cast of Channel 4’s Gogglebox during Friday’s episode for their thoughts.

After a news report from ITV’s Charlene White told viewers not to panic buy, Gogglebox’s Tremaine, Twaine and Tristan pointed out: “The only words people are taking out of that sentence are ‘panic’ and ‘petrol’.”

However, it was Channel 4 regulars and Gogglebox fan-favourites Sophie and Pete who had a rather fiery response to the scenes.

“These d**kheads that are b****y queuing up for the fuel are probably still working through the stockpile of toilet paper they got at the beginning of the pandemic,” Sophie fumed.

And Pete agreed, adding a joke of his own: “Yeah, while having pasta for every meal.”

Giles, however, was more sympathetic as he revealed to his wife Mary how he had rushed out to stock up.

“I just had to hear that word ‘panic buying’, Nutty,” he said as Mary replied: “Makes you want to?”

Giles revealed: “I got in the car and I filled the car up. Do you know why, Mary?”

“Why?” Mary pondered as Giles revealed: “Because it’s an alpha thing to do, it’s a dog eat dog world out there and we’ve got a wedding to get to.”

Gogglebox’s David also saw the comical side of the panic as he quipped about Grant Shapps’ comments that he would “move heaven and earth” to resolve the problem.

“You haven’t got to move heaven and earth, all you gotta move is f*****g petrol,” he quipped.

Sophie and Pete also chipped back in to blast Brexit amid reports the relaxation of immigration laws would come into place for HGV drivers.

“Brexit lasted long,” Sophie commented as Pete added: “Oh yeah. ‘Keep them out’ they were all saying – but if you’re an HGV driver. You’re welcome.”

The episode of Gogglebox was also recorded after the news broke that army tanker would be deployed on Monday to help ease the demand.

And reacting to the comments made by the cast of the Channel 4 show, it seems people are divided.

Rick O’Shea said on Twitter of Pete and Sophie’s comments: “Sophie: ‘The people getting petrol are the same people working through their toilet roll’. Pete: ‘Having pasta for every meal’.LOOOL. #Gogglebox.” (Sic).”

Mike added: “Well said @PeteandSophie about the idiots with the petrol #Gogglebox.”

However, this wasn’t the only talking point from the episode as fans were presented with a tech error as the credits rolled.

“No drivers no petrol no one at the f*****g BT tower  #Gogglebox,” Ricky joked about the blank screen.

While Em added: “What happened at the end of gogglebox. With the BT tower thing. thought the world was ending for a sec loool #gogglebox.” (Sic)