Will Smith and the cast of The Fresh Prince of Bel-Air came together for a 75-minute reunion special on HBO Max, which dropped a day early Wednesday, and they took a moment to remember the late James Avery, who played the beloved Banks patriarch, Uncle Phil, for six seasons.

Avery, who died in 2013 at age 68 following complications from open heart surgery, was credited by the Fresh Prince cast as being “the heart of the show.”

“He was my teacher. I learned what it means to be an artist from him,” Tatyana Ali, who played Ashley, said in the special, while Daphne Maxwell Reid, who portrayed Aunt Viv, added: “We knew that he knew the answers or could guide folks to the answers.” Others like Alfonso Ribeiro, best known as Carlton, and Ross Bagley, aka Nicky, remembered Avery for his fondness of jazz music and the arts.

But it was Smith’s reflection of how much of an impact Avery, who played Will’s surrogate father on the series, had on him that hit the deepest.

“He pushed me so hard. His thing was that I am in such a unique position and that responsibility, you must elevate your craft. You have to represent and you are paving a way, and he just wouldn’t give me an inch,” Smith shared.

Smith recalled filming the iconic and most emotional episode of Fresh Prince, season 4’s “Papa’s Got a Brand New Excuse,” where Will’s biological father re-emerges after 14 years out of his life.

“I remember in one of my favorite and most famous scenes from Fresh Prince — the father episode — James Avery was this 6’4″, 300-pound stage-trained Shakespearean beast and I’m the little rapper from Philly under him and I wanted him to think I was good. I wanted him to be proud of me, so the episode comes and we come to that scene and I was like… I want to deliver this scene so bad,” he recalled of Will and Uncle Phil’s tearful heart-to-heart. “If you remember, in front of the audience, I flubbed my line on the take and I messed it up in front of the audience and my mind snapped and I’m like, ‘Ahhhh!’ James says, ‘Hey! Right here!’ And I was like… [straightens up]. He was like, ‘Use me!’ And he says, ‘Get yourself together,’ and I get it together and he says, ‘Action.'”

“With the scene that we do, it’s the scene that ends being in the episode. And I fall into his arms at the end of scene, he’s holding me and he’s holding me. He whispered into my ear, ‘Now that’s acting,'” a tearful Smith added, taking Kleenex out of his pocket to wipe his eyes. “Every single time…” He paused as his voice began to crack as the emotions of the weight of the scene and how much Avery meant to him began to take over. “And it’s like people don’t even know when they’re shaping you and forming you and crafting you. He knew.”

“There are some people that plant seeds. That’s what they do. And they do it to anyone they come across,” Ali agreed. 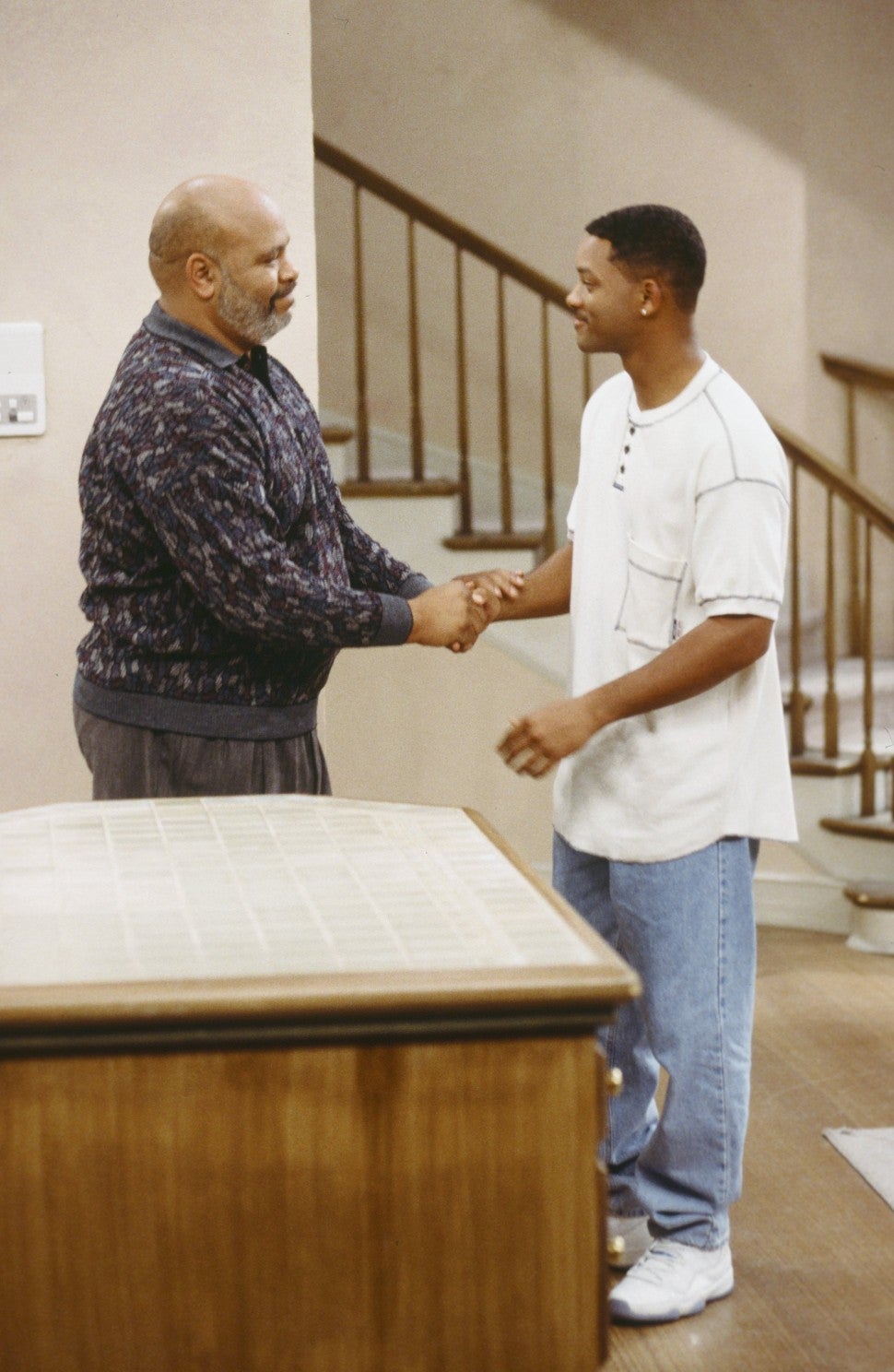 The cast then watched a sweet, moving video tribute to Avery and Uncle Phil, featuring lighthearted scenes and some of the character’s most memorable words of wisdom, including a line he says in an episode, “Death is a natural part of life,” that hit differently as they watched.

After the video faded to black, Smith and his co-stars were consumed with bittersweet emotion as they sat in silence as they wiped away tears. “James, I miss you,” one of them is heard remarking.

“I think what happens on family shows like this, it’s one of those things you cannot buy or fake chemistry. It’s just the way that we all came together was very special,” Smith said.

The Fresh Prince of Bel-Air first debuted in 1990 and ran for six seasons, before airing its series finale in May 1996. A drama reboot, titled Bel-Air, is in the works with a two-season order at Peacock.

The Fresh Prince of Bel-Air reunion special, which also saw Smith and “the original Aunt Viv” Janet Hubert reconciling after 27 years, is streaming now on HBO Max, as well as the original series. For more on the groundbreaking sitcom, watch ET’s video below.

‘The Fresh Prince of Bel-Air’ 30th Anniversary: ET’s Time On-Set of the Sitcom