Christopher Landon knows his way around horror. After jumping on the “Paranormal Activity” bandwagon — the filmmaker wrote its second, third, fourth, and fifth installments, which include the best and worst of the found-footage franchise — Landon turned his affection for the genre toward its dark comedy. He directed “Scouts Guide to the Zombie Apocalypse” in 2015 and created his own clever franchise with the one-two punch of “Happy Death Day” and “Happy Death Day 2U.”

His latest original vision, “Freaky,” isn’t quite up to the charms of “Happy Death,” but it’s still entertaining and smart where it counts. A blood-spattered twist on the “Freaky Friday” mythos that dares ask, “Hey, what if you were a nice high school kid who ended up switching bodies with a psychotic serial killer who looks like Vince Vaughn?,” the film is bolstered by go-for-broke performances from Vaughn and Kathryn Newton, as well as Landon’s sharp humor (and sharper kills).

Opening on “Wednesday the 11th” — and playing that for every laugh it can get — “Freaky” kicks off in traditional horror fashion, focused on a group of naughty teenagers giggling about a loser murderer who definitely, absolutely, for sure isn’t coming to kill them. Vaughn is cast as the truly cracked Blissfield Butcher, and while Landon and Michael Kennedy’s script doesn’t do much to flesh out his character — a similar issue when it comes to the baddies in the “Happy Death Day” franchise — they do have fun using him as something of a stand-in for plenty of classic madmen. In short: He hates teens! While the legend of the Blissfield Butcher remains oddly underbaked (especially for a dude who has apparently been doing this for decades), Landon and Kennedy make up for that with a series of inventively icky kills and a fast-moving introduction that lays out some essential rules to guide the story. While Vaughn’s monster might be thinly drawn, Newton’s good-hearted Millie fills the gap and continues Landon’s tradition of crafting darling, if unexpected heroines.

“Freaky” doesn’t skimp on the meat and potatoes of any good body-swap movie: having a ton of fun watching two different people awkwardly slip into their new corporeal figures (and lives). Both Newton and Vaughn dig into their new parts with gusto, and while early scenes play a bit broad, the duo eventually settle into their roles with remarkable ease. Millie, so used to not being seen and respected, can’t help but enjoy getting stuck in Vaughn’s “giant” body (turns out, people really do listen to large white men!), while the Butcher delights in the anonymity afforded by Newton’s form.

Along the way, the pair discover more about themselves and each other (kind of), accidentally solve a few problems (the Butcher’s treatment of Millie’s mean shop teacher, played by Alan Ruck, takes the cake), and put on a masterclass in physical comedy. There is at least one instance of Vaughn gamely “proving” his Millie-ness with a silly high school cheer, and Newton derides a truly scary level of enjoyment out of mean-mugging as an evil killer. These people have range, and “Freaky” doesn’t waste an inch of it. 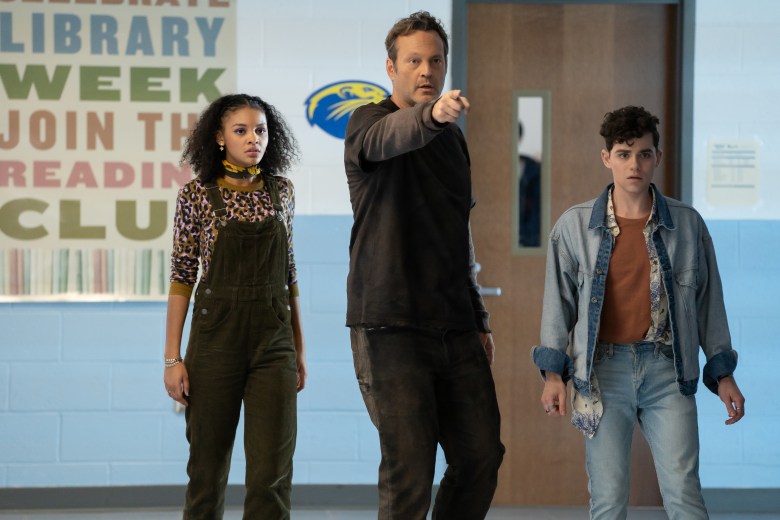 Less successful are some of the film’s other tropes. For every smart twist, there’s a less effective one: Millie’s big sister (Dana Drori) delights as a tough-talking local cop, but that’s also tied up in the played-out revelation that the whole family is marked by the still-fresh death of their patriarch.

Even more boxed in are Millie’s best friends, the prototypical “sassy gay guy” (Misha Osherovich as Josh, who gets time to shine in the film’s second half) and the “smartypants Black girl” (Celeste O’Connor, still bursting with star power). While ripe for more pointed jabs, “Freaky” doesn’t interrogate them to their full potential, though at least Osherovich and O’Connor make out with some jokes about how things usually go for people like them in horror movies (read: badly!).

Still, “Freaky” has enough snappy fun to keep it ticking along to the inevitable “shock” ending, forcing together two delightful powerhouses in a battle royale that seems primed to kickstart another new franchise for Landon. (That’s not a spoiler, simply the nature of the current genre beast!) Armed with his trademark wit and a pair of wonderfully game stars, “Freaky” might not be Landon’s best, but it’s well worth the wacky trip.

As new movies open in theaters during the COVID-19 pandemic, IndieWire will continue to review them whenever possible. We encourage readers to follow the safety precautions provided by CDC and health authorities. Additionally, our coverage will provide alternative viewing options whenever they are available.