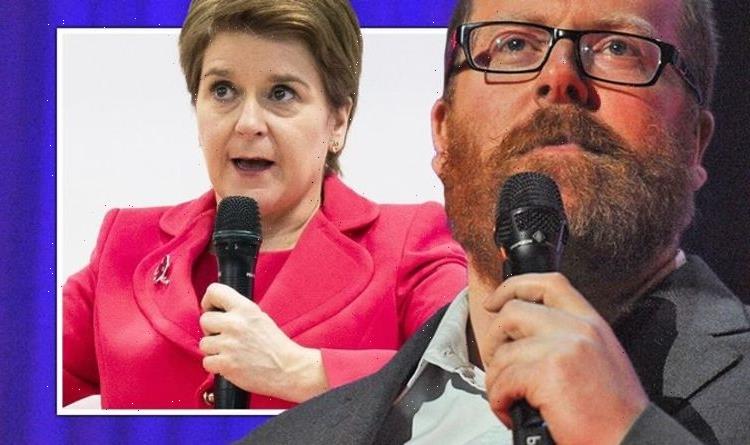 The pro-independence Scottish comedian, 49, returned to TV screens last night for a special edition of satirical comedy series, ‘Frankie Boyle’s New World Order’. The latest instalment of his eponymous BBC2 show, now in its fifth season, was filmed in Glasgow, where the UN’s COP26 summit is taking place over the next couple of weeks. Frankie introduced the programme by reeling off a string of jokes about the climate change conference being held in his home city.

He quipped about drug use in Glasgow, as well as Swedish environmental activist Greta Thunberg, who this week addressed protesters in the city as they vented their anger at world leaders attending COP26.

However, viewers noted that, while the panel dissected Prime Minister Boris Johnson and Labour leader Keir Starrmer, there were no “pops” at Scottish First Minister Nicola Sturgeon.

Social media users, who called out the absence of any satire aimed at Ms Sturgeon and her Scottish National Party, expressed their disappointment at the comedy show.

JUST IN: ‘We’re getting fed up now’ Our Yorkshire Farm’s Clive Owen shares concerns over Ravenseat

“A COP26 special from Glasgow. Starmer, and Bojo slaughtered – but not one pop was taken at Sturgeon, SNP or Scexit. I wonder why, not as if there’s no material.”

Another user, Danny Higgins added: “Spot on. None of them seem to think that the SNP are the establishment.

“That makes these comedians part of the establishment that comedians anywhere else in the world be destroying.”

Other comments also highlighted Frankie’s alleged reluctance to criticise Mrs Sturgeon due to the pair being on the same side of the independence debate.

Twitter user @McpheeMiss wrote: “I must admit, I did wonder about the editorial decisions. Seemed off not to have a satirical swipe at Sturgeon. Actually I was disappointed in the whole offering”.

Frankie has appeared numerous times on the BBC over the years, including a stint as a regular guest on ‘Mock the Week’.

However, the comedian has also previously hit out at the broadcaster.

In a throwback interview from 2014, he blasted the BBC’s “bias” as one of the reasons why Scottish independence “won’t happen”.

The scot was quoted by The Herald as he spoke at the Guardian Edinburgh International Television Festival.

During the event, Frankie vowed that he would vote for Scottish independence in the 2014 referendum, which saw Scots reject breaking away from the rest of the UK.

Speaking about his support for an independent Scotland, he said: “I’m all for it. It won’t happen.

“One of the reasons it won’t happen is the media is just completely against it. There’s a huge level of media bias.

“One of the reasons the BBC is biased against it that never gets mentioned is the BBC raises a licence fee of £300-odd million in Scotland – they won’t release the actual figures but it’s probably £320 million – and they spend, they say, £160 million, £60 million of which is very probably finessed.

“There’s just too many cross-currents in Scottish culture.

“One of the great things about being pro-independence is I get maybe half a dozen tweets a day telling me that I don’t understand economics from Rangers fans.”

The comedian was also asked about how the country would look if Scotland voted against independence.

He added: “I think half the country will have had their dreams and hopes destroyed, so it will be pretty much business as usual for everybody.”