With Marvel fans cooped up because of the pandemic, many of them have been rewatching the MCU. That doesn’t stop with just the 23 movies, but with the TV shows, including Agents of SHIELD and Agent Carter. And they’re lamenting Agent Carter’s demise anew.

Despite Peggy Carter being a fan favorite, her show managed to last only two seasons, while Agents of SHIELD is just wrapping up its seventh and final season. How could a show with such a well-liked character be so short-lived? Fans and Hayley Atwell herself have thoughts.

What happened to ‘Agent Carter?’ 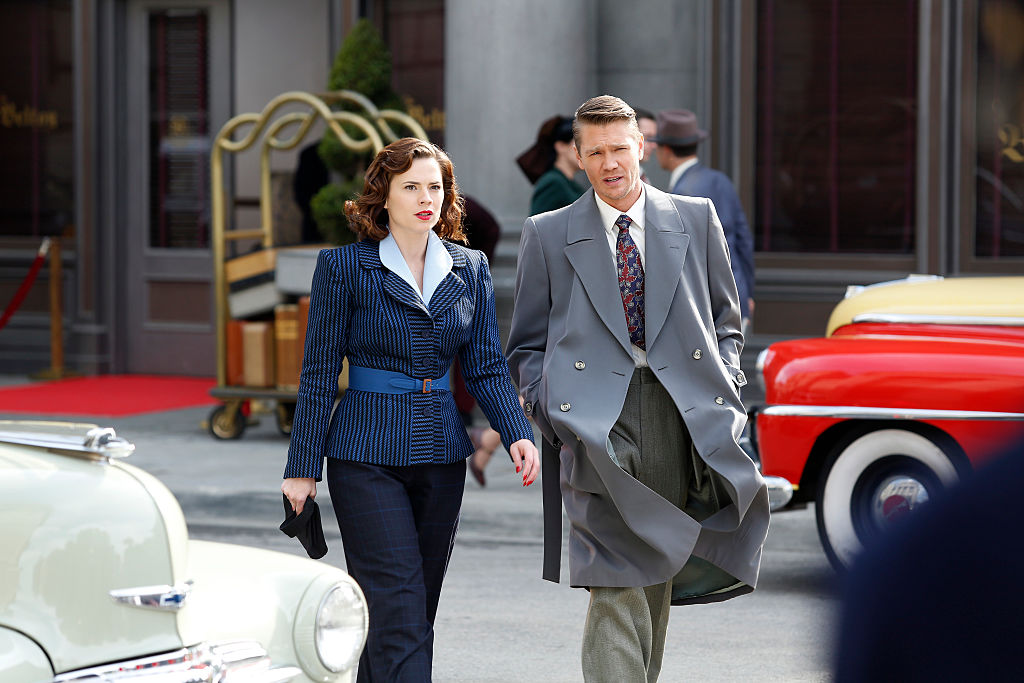 RELATED: Why ‘Agent Carter’ Needs to Return for Her Own Marvel Movie

Agent Carter got canceled for the same reason most shows get canceled: Not enough people were watching. Of course, the reasons cut a little deeper than that. The character got the show in the first place based on a short film, and Disney-owned ABC gave Marvel the go-ahead in 2014.

The show depicted Peggy’s adventures after Captain America: The First Avenger. She still mourned the loss of Steve Rogers but made her way continuing to be a spy. That was easier said than done after the Allies won World War II and expected women to return from the factories and bond rallies to start punching out kids. Which they did, in record numbers. Peggy wasn’t going to go domestic that way.

The show had a decent viewership in the first season. In the second season, however, the ratings dropped by more than half, to just over 3 million viewers, Variety reports. That wasn’t good enough for a third season, and the cancellation ax fell. Atwell moved on to another show, Conviction, which only lasted one season.

Fans want to know: why did Agent Carter end so soon?

On Reddit, a fan couldn’t understand why the show ended prematurely, asking, “The characters are engaging and lovable (especially in season 2) and the storylines are well thought out and entertaining. Plus, a female lead that is kick ass despite not having super human abilities. I totally get why Cap went back to be with her.”

One fan responded, “Terrible marketing. Hardly anyone knew when it was on. I hope (Kevin) Feige decides to bring it back on Disney+, because there’s still a lot of material that show can cover, more especially the beginning of SHIELD & Peggy’s earliest adventures as director.”

Feige sort of is bringing Carter back for at least one show in the animated What If …? Which imagines what would have happened if Peggy had taken the super soldier serum. Atwell herself lamented Agent Carter’s demise in an interview with the AV Club, saying, “You know, Marvel didn’t want it to end. There’s lots of online campaigns to bring her back. Fans loved her. I think it was just a network economical thing.”

What is Hayley Atwell doing now?

Luckily, fans will be seeing and hearing more of Atwell in the near future.  Not only will she reprise Peggy in What If …? which should be on Disney+ next year, but she’ll get into more spy games, appearing in the seventh Mission: Impossible movie. That’s quite a feather in Atwell’s acting cap, considering the series has sported other strong female leads, including Michelle Monaghan and Rebecca Ferguson.

According to Cinema Blend, writer-director Christopher McQuarrie has said Atwell’s character would be a “destructive force of nature, which makes her sound like she might be a villain. Without tipping her hand too much, Atwell said, “What I know is there is ambiguity, and the interesting thing we’re kind of exploring is her resistance to a situation she finds herself in, and how she starts off and what she becomes. The journey of what she comes into and then what is asked of her and potentially where she ends up.”

The seventh Mission: Impossible is expected to hit theaters in November 2021. It’s being shot concurrently with the eighth movie, which will follow in November 2022.