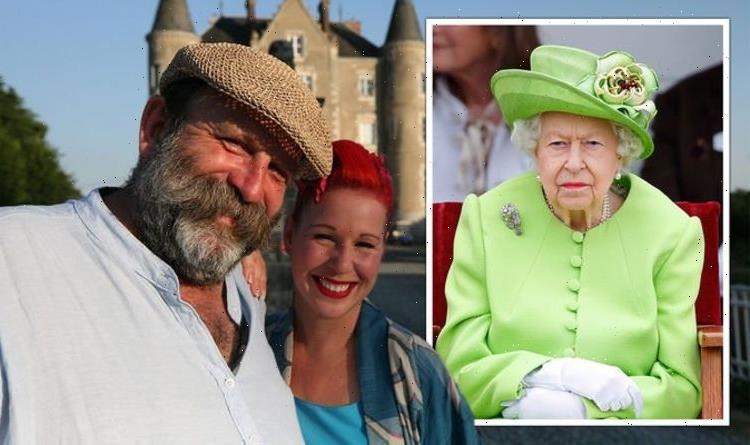 Angel and Dick Strawbridge realise the chateau is wonky

Escape to the Chateau star Dick Strawbridge is well known for his television career, but previously worked in the military. His work in the army once gave him the opportunity to cross paths with the Queen. However, in a recent interview Dick revealed he had to refuse to answer one of the monarch’s questions.

Before fans knew Dick for his appearances on Escape to the Chateau, he was a military man and was even made a Member of the Order of the British Empire.

As a result, Dick met the Queen in 1993 when he was made an MBE for his distinguished service in Northern Ireland.

Reflecting on his encounter with the monarch, Dick revealed the Queen’s “eyes lit up” when he told her he couldn’t share details of his time in the military.

The Escape to the Chateau star explained: “The Queen said, ‘Ah, Major Strawbridge, what did you do in Northern Ireland?’

“And I said, ‘I can’t actually say, Ma’am.’ One of her aides whispered in her ear, and her eyes lit up.

“She instantly knew who I’d been working with and what I’d been doing,” he revealed.

Dick detailed his military career and explained why he eventually chose to retire from the army.

The Channel 4 star said: “I spent 20 brilliant years in the army, but at the age of 40 I resigned.

“I was on my way to becoming a general and knew I wouldn’t be getting my boots dirty any more.

“I didn’t join the army to do a desk job,” he remarked.

Dick explained the military was a running theme in his family, as he wasn’t the only one to take on an army job.

His two brothers David and Bobby joined the military as well, one in the Royal Engineers and the other in the Royal Corps of Signals like himself.

Dick highlighted how throughout his career, he and his Royal Corps of Signals colleagues tended to be the last ones to leave war zones.

He explained: “I was working in everything from satellites to counterterrorism.

“I was never perfect and was quite unspoken and a bit naughty at times but I got the job done and that’s why I kept being promoted,” he told The Irish Mail.

However, Dick’s military days are now behind him as he’s settled down in France with his wife Angel and their two children.

Together Dick and Angel bought their 45-room chateau for just £280,000 back in 2015 and the property boasts 78 windows,12 acres and one moat, but needed a lot of work when they first moved in.

When they bought it, the building had no electricity, heating or running water – but they have since renovated it over the course of six years.

As well as transforming the chateau into their dream home, they also host weddings at the luxurious French property.

Escape to the Chateau is available on All4.