Stephen Bannon’s name arouses controversy and disdain, so Errol Morris expected to face uncertain audiences when he decided to make Bannon the subject of his next movie. However, even the veteran documentarian didn’t anticipate the volume of backlash he received for “American Dharma,” a feature-length interview with Bannon that digs deep on his role as a senior advisor to Donald Trump and as the architect of his presidency. It also reveals his psychology and cultural sensibilities, including thoughts on some of his favorite movies.

For those appalled by Bannon — and yes, there are many of us — “American Dharma” is designed to instigate righteous indignation, and then to consider the source. Morris doesn’t make it easy, but the movie holds tight to its cause, even if it’s hard to watch Bannon gloat about his accomplishments. Since the days of “Gates of Heaven,” Morris has used documentaries as a platform for psychological investigation, and “American Dharma” is a paragon of that tradition. It has a fascinating, provocative dark energy coursing through every scene, but that’s not the easiest sell — and continues to present challenges for the movie as it journeys along the festival circuit without a distribution deal.

“I was apprehensive,” Morris said in a recent interview, “but I could never imagine that people would say I was promoting Stephen K. Bannon or endorsing his views. That’s a surprise. The ethics thing, to me, is not a terribly interesting argument. Sorry.”

To some extent, “American Dharma” is a victim of poor timing. Morris premiered the movie at the Venice International Film Festival just a few days after the New Yorker Festival cancelled a scheduled talk with Bannon after other guests of the event threatened to pull out. While the ticketed event risked validating Bannon’s most problematic ideas, Morris’ movie hardly takes them for granted. The duo argue throughout, and Morris blatantly calls out Bannon for espousing racist views. But many critics and audiences have criticized Morris for bothering to make the project in the first place, giving Bannon the opportunity to hijack the narrative.

“I certainly did not anticipate that,” Morris said. “That may be because I’m an idiot. Possibly.”

The filmmaker took his time working through some of the thornier questions surrounding his project, participating in an interview with the New York Times a month before his festival premiere and defending his intentions in front of international journalists at a Venice press conference. He speculated that speaking out about the project, and defending his intentions, “possibly turned me into a pariah,” leading this interviewer to interrupt him with, “Oh, please.” Morris chuckled. “Oh, grant me just a little hyperbole,” he said. “I’ve never seen interviews as being adversarial. That may be a problem right off the bat.”

Morris, an energetic intellectual who speaks in lengthy, solipsistic monologues akin to many of the pensive characters he’s captured in a decades-spanning career, has grown increasingly flustered by the reactions to his movie. “It’s clear enough that the director doesn’t buy into Bannon’s overarching narrative of Trump as a revolutionary warrior giving power back to the disenfranchised workers of America, but the film is still too dominated by Bannon’s monologuing for the contrasts to really land,” wrote Dave Sims in The Atlantic. In Variety, Owen Gleiberman concurred. “It’s hard to escape the feeling that Errol Morris got played,” he wrote. 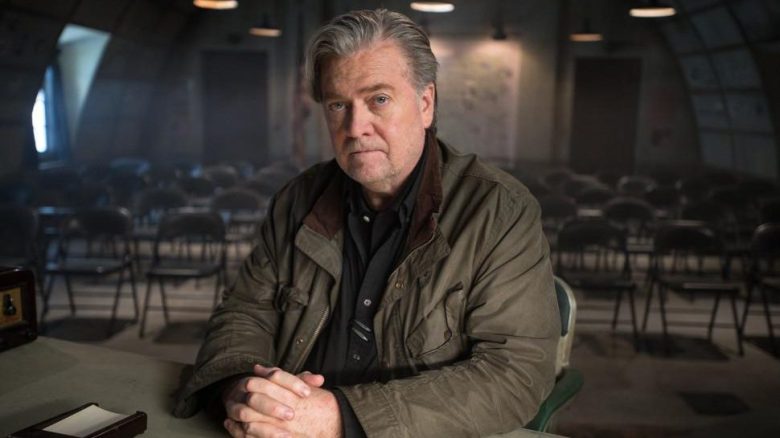 However, the reasons that the Bannon documentary makes people so uncomfortable also make “American Dharma” one of Morris’ most intriguing works. With pitch-black humor, Morris has staged a most unusual horror show about the end of days as Bannon debates the militaristic movies he loves (“Twelve O’Clock High,” “The Bridge Over the River Kwai”) while boasting about his ability to transform Trump’s presidency into a national disaster. At times, the movie suggests a real-life “Dr. Strangelove,” sketching out the ludicrous process through which a self-obsessed moron with delusions of intellect put humanity itself into crisis. Morris crafts a condemnation in his own eccentric terms.

The interview unfolds in a musty, vacant airplane hangar, as if Bannon is hiding in a bunker while plotting the apocalypse. In the closing minutes, he gets his wish: Morris burns down the whole set as Bannon walks into the distance, transforming the movie into a disturbing illustration of his twisted fantasy. “The heart of it is diabolical,” Morris said. “It’s about destroying, not building. That’s hate. And that’s really, really, really scary. This is a bad time in America. People are going crazy. Myself among them.”

Morris sounded exhausted by the backlash, but hasn’t backed down from defending his intentions. “What am I supposed to say?” he said. “Well, I guess you’re right, I shouldn’t have made the movie? Allow me to apologize? I just felt overwhelmed by the stupidity of it all.” He found a more hospitable audience for the movie at the New York Film Festival, but as “American Dharma” prepares for upcoming bookings at the Chicago International Film Festival and the International Documentary Festival Amsterdam, it has yet to secure U.S. distribution. (WME is handling sales for the film.) “It has certainly informed my desire to do something other than a political film next,” he said.

Nevertheless, Morris doesn’t regret making “American Dharma”; he’s just pissed by a polarized climate that seems incapable of wrestling with the moral gray area. From Holocaust denier Fred Leuchter in “Mr. Death” to Donald Rumsfeld in “The Unknown Known,” he’s built a career around unlikable characters. These days, “everything is about condemning, pushing back,” he said. “Part of what I’m trying to do in all my films is to try and get inside someone’s head. It’s not the exercise of you’re wrong, you’re very wrong, wrong again. There’s a different kind of enterprise that interests me. Who is this person in front of my camera? The movies — which many reviewers just ignored, or failed to understand, or refused to understand — are a way in.”

Morris originally had hoped to rush “American Dharma” into theaters before the midterm elections. “I made it for whatever misguided reasons, and maybe they weren’t misguided reasons, but I made it because I felt I didn’t want to sit on my hands,” he said. “I felt it was horrible, what’s going wrong in this country. I see all the craziness afoot. I wanted to weigh in. Who are these characters?”

He approached Bannon with the same curiosity he had brought to disgraced Secretary of Defense Robert McNamara in “The Fog of War,” the movie that inspired Bannon to make his own documentaries. “You know, you can read endless attacks on Bannon,” Morris said. “Yeah, yeah yeah. He’s an antisemite. Yeah, yeah, yeah. He’s an anti-populist clothing himself in national populism, whatever that might be. But it goes beyond all of that. He’s an angry, destructive, harmful person.” So how does someone like that wrestle control of the country? The distaste for exploring that question is exactly what compelled Morris to ask it.

He went through some of these challenges with “Unknown Known,” which also struggled with critics and at the box office. “People did not want an art film about Rumsfeld, and did not want an art film about Bannon,” he said. But both experiences provided illuminating to him. “I was overcome by what I would call Rumsfeld’s emptiness, distressed by it,” Morris said. “Bannon was a different experience. Bannon is smart, he’s kind of funny, he’s sort of capable of irony, but the end of it is this raw fury. That’s what I was left with.”

Morris admits in the movie that he voted for Hillary Clinton “out of fear,” and said he had approached her campaign about helping out. “I tried to do ads for Hillary,” he said in an interview. “I tried really hard. They didn’t want me. I don’t know what they wanted.” He offered to sit her down in front of his patented Interrotron, the device he uses so that subjects can speak directly into a camera. “I felt that if I’d put her on the Interrotron, I could craft ads where I could break her out of being Hillary and turn her back into a human being,” he said. “Get her to actually engage, interpersonally. Who knows whether it would have done any good?”

On “American Dharma,” Morris wanted to make sure he didn’t come across as endorsing Bannon in any capacity, even though the pundit says on camera that Morris’ Oscar-winning “The Fog of War” inspired Bannon to make right-wing propaganda movies.

Among the scenes left on the cutting-room floor, one found Morris ribbing Bannon about Trump’s proposal to build a wall along the U.S.-Mexican border. “I said, ‘You know, I don’t like it here anymore. You’ve destroyed my country. I’m thinking of moving to Mexico. And the wall is the only thing that will keep those American rapists, psychos, and killers out of Mexico!’” Morris cut the scene. “I worried that I’d get the feedback that I was buddy-buddy with the guy,” he said. When Bannon came to Morris’ post-production studio for ADR work, the filmmaker noticed he was reading a book about the Great Wall of China. “And I said, ‘You know, the Great Wall really worked!’” Morris said. “He said, ‘How’s that?’ And I said, ‘As far as I know, no Mexicans in China!’ He did not like that. He said, ’Not funny Errol, not funny.’” 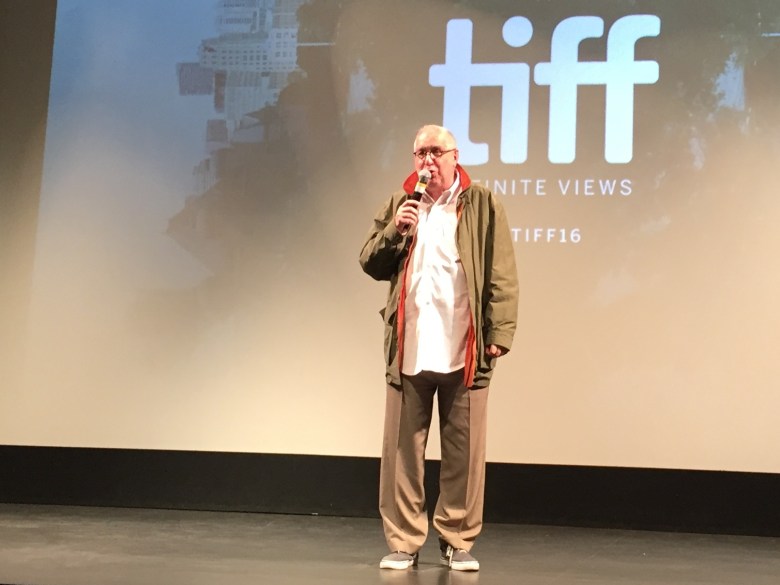 As Morris stitched together his movie, he shared rough cuts with a number of peers, including filmmaker Barbet Schroeder, veteran journalist Seymour Hersch, and Joshua Green, author of “Devil’s Bargain: Steve Bannon, Donald Trump, and the Nationalist Uprising,” the first serious overview of Bannon’s role in the 2016 election. In an email interview, Green said he was a fan of Morris’ achievement.

“It’s the best sustained, forceful examination into the mind of the man who got Donald Trump elected president,” he said. “That’s important information for everybody to have, but especially liberals and other anti-Trump folks horrified at what out country has become and inclined to want to silence Bannon rather than listen to him.” He emphasized that attempts to understand Bannon’s strategies could lead to new ways of combating the Trump presidency. “You can’t hope to defeat Trump if you don’t grasp what it is that Bannon’s trying to do, see the world through his eyes,” Green said. “You have to know your enemy. Errol’s film illuminates this brilliantly, and he doesn’t flinch from challenging Bannon — repeatedly and persistently — about the uglier aspects of his beliefs.”

Morris doesn’t keep in touch with Bannon on a regular basis, but Bannon did share his thoughts with Morris on the final cut. Considering the feedback he received, Morris almost sounded like one of his own detractors. “I made an art film about a major figure who wants to destroy the world,” he said. “And he liked it. That was, perhaps, my most problematic review.”