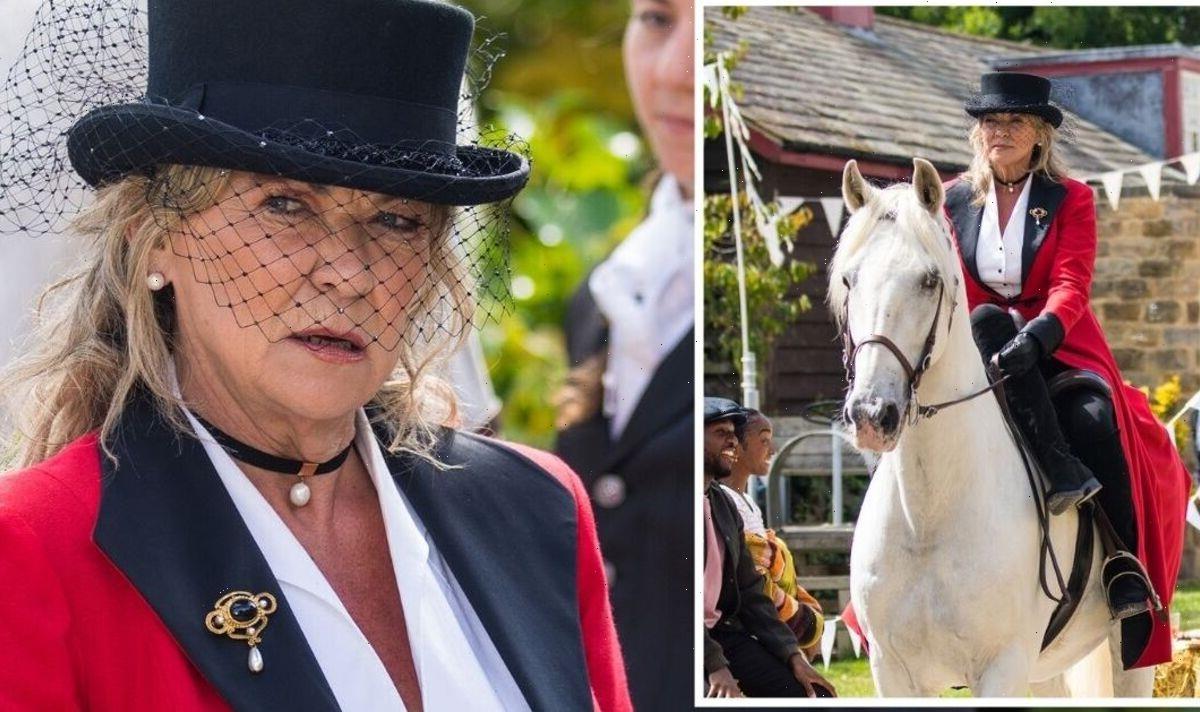 Claire King returned to ITV soap Emmerdale in 2018 as the infamous Kim Tate, with her feisty character taking a firsthand role in the upcoming anniversary. The spectacular Super Soap Week will see Kim set to marry Will Taylor (played by Dean Andrews) and will give fans the highly intense drama that every wedding has. However, she has recently opened up about a nasty injury she sustained while shooting the dramatic scenes.

The first look of Kim on her wedding day see’s her arrive on a horse, with Claire admitting that her character doesn’t do things by half.

The actress began: “Kim does entrances and exits very well.

“It’s a statement look, I love it. She arrives through the village, and there are various stalls and lots of bunting and fanfare, and there’s a brass band.

“People are lining the road, so it’s a grand entrance.”

However, as fans know the residents are set to experience a storm which will hinder the rest of their celebrations.

Speaking on the upcoming scenes, Claire explained that the winds in the village start to rake off, and Kim and Will make a quick exit to Home Farm for the reception.

However, by this time the storm is really brewing, knocking down trees and taking the roots out of the grand.

With the trees on the ground blocking the cars come through, very few people make it to the reception and go missing around the village.

When it comes to Emmerdale, they have never done climactic sequences and stories by half, and this week is no exception.

The storm promises to be another addition to add to the hall of fame for dramatic scenes, as Kim has to ride off to the rescue when one of the residents goes missing.

She explained: “There was a lot of riding, jumping through woods with giant wind machines blowing and a few stunts with the horse.”

However, she didn’t leave the set without sustaining an injury.

“A week or two afterwards, I had this swelling in my nose and then it puffed up under my eye. I got my doctor to give me some antibiotics because I thought I had gotten some sort of infection.

“But then the weekend after, I blew my nose and out came a seed pod! I think it must have gotten lodged in from when we were doing all the woods stuff because there’s so much dirt, leaves, dust and soil.

“It must have blown up with all these wind machines and I was not protecting my nose or anything, which you wouldn’t even think about.

“It must have got lodged there, stuck there for a week and turned septic.”

The week kicks off tonight (October 16) for the anniversary and Kim isn’t the only one who will be involved in the dramatic scenes.

One of which is Amelia Spencer (Daisy Campbell) who is set to go through labour by herself as the storm is happening.

She recently told Digital Spy: “Amelia wants to meet Noah, who’s working at Wylie’s Farm with Marcus. She goes and tries to meet him there.

“Amelia goes on this beautiful picnic because they’ve never had a proper date before.

“Then obviously it takes a turn for the worse and the weather changes completely. The worst storm ever hits and it all goes downhill from there, really!

“Honestly, it felt like we were filming a film. It’s the best filming day I’ve ever done. It didn’t feel like Emmerdale.”