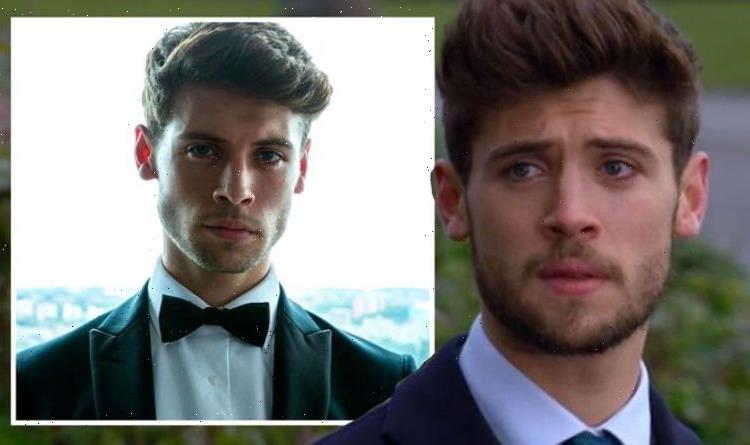 Joe (played by Ned Porteous) hasn’t made a physical appearance in the Emmerdale village for over three years, not since he discovered Kim Tate (Claire King) was trying to kill him. Viewers of the ITV soap know he is still alive and living somewhere away from the Dales but in a mysterious scene at the end of Tuesday night’s episode, an unknown character was seen watching Gabby Thomas (Rosie Bentham) walking around with her new baby. Although there was a lot of talk about Jamie Tate (Alexander Lincoln) returning, this could have been a red-herring to throw fans off the scent of another beloved resident making their comeback. But could he have a deadly warning for the mother of the new heir to the Tate empire?

In the second half of Tuesday’s hour-long episode, the preparations were being made to give Millie Tate (Willow Bell) a way to remember her mother, Andrea Tate (Anna Nightingale).

Although Kim was hesitant to agree at first to Charles Anderson’s (Kevin Mathurin) idea, she eventually came around with some encouragement from Gabby.

During the same instalment of the weeknight serial drama, the mother of newcomer Thomas Tate also told Jai Sharma (Chris Bisson) she held a share in the Hop business.

This was part of the deal Kim agreed to when Diane Sugden (Elizabeth Estensen) left the village as she wanted her granddaughter to have security in the future.

With no qualms at all, the Home Farm owner seemed to let her grandson’s mother take complete control over every situation to make it seem she had influence over her.

With Bernice Blackstock (Samantha Giles) also moving into Home Farm, Kim did raise an eyebrow but has been relatively calm about the whole thing.

In fact, this is a huge game Kim could be playing to let Gabby think she has power when in fact, she has very little.

The only thing Kim was persistent about was her son Jamie was going to return for Andrea’s memorial service given she had put a notice in all northern newspapers.

Many believe the original heir to the Tate empire is dead but his mother is convinced he is still alive and looking for an opportunity to come back to the village.

As the episode ended, Gabby believed she had the perfect set-up for life but a shadow seemed to be following her from a distance.

A person could be seen watching the new mother as she spoke with Charles about how Kim was struggling to accept Jamie was gone.

“She’s living in hope. Jamie was her only son,” the vicar told Gabby before asking how she was coping without a father for her child.

“There’s no hope here and I thought I didn’t care either way but the more [Kim] is convinced he’s alive, the more I am convinced she’s wrong,” she replied.

“But tomorrow will tell,” the youngster remarked, referring to Andrea’s memorial before and thinking she had some power over Kim, she told the vicar to ignore a previous conversation he had with the Home Farm owner.

Charles and Kim had disagreed over which photo of Andrea would be best to put up and Gabby told the vicar to choose the one he thought was better.

When she was left on her own with Thomas Gabby sensed there was someone watching her from the bushes and turned around to see if she was right.

There was no one to be seen so she decided to blissfully carry on with her walk but as she did, the ominous figure was seen walking away from the bushes.

Many will think this was Jamie and he is set to make a big return to the village but something about Kim’s behaviour could suggest this is actually Joe.

If anyone knows how Kim works, it is her step-grandson Joe as she tried to kill him back in 2018 on his wedding day to Debbie Dingle (Charley Webb).

It was Graham Foster (Andrew Scarborough) who was instructed to carry out the deed but instead, he helped his surrogate son flee the country.

Knowing Jamie is out of the picture and having heard a new heir to the Tate empire has been born, Joe could be making a risky move by returning to the village.

However, he could warn Gabby she is a deadly danger and Kim is playing the long game in preparation to kill her.

Letting her think she has control and ripping it away when the plan is exposed could put the mother of one in a perilous position.

Realising Gabby would need a safe place to flee to, Joe could suggest she and Thomas leave with him and escape the village.

The young mother would know Joe is right so will she leave with him or would she confront the Home Farm owner over her callous ways?

Fans have been waiting for Joe to return ever since he left the show three years ago and knowing he is alive has kept them guessing for many months.

Taking to Twitter, viewer Ryan wrote: “If Joe Tate does return I wonder if he’ll return as a different actor? #Emmerdale.”

Pauk added: “If Joe Tate is back under these writers everything we remember is about to become undone. #Emmerdale.”

Chloe commented: “Joe Tate needs to come back into the show! #Emmerdale,” as Jordan shared: “Can #Emmerdale bring back Joe Tate please?”

Emmerdale airs weekdays at 7pm on ITV, with an extra episode airing on Thursdays at 8pm.