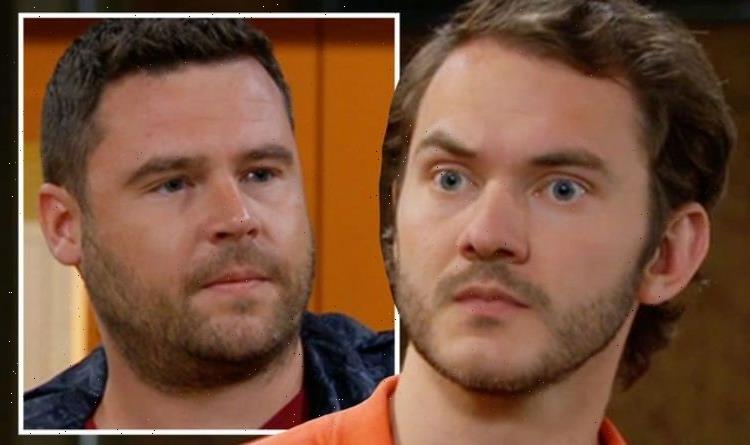 Aaron (played by Danny Miller) has been scratching his head for weeks on Emmerdale as to why Ben (Simon Lennon) has been adamant the pair never stay over at his place. Trying to get to the bottom of the matter during Thursday’s episode of the ITV weeknight serial drama, the village heartthrob did some digging on his boyfriend’s address. Unfortunately, it seems there is a very tragic reason as to why the kayak instructor doesn’t want his partner to discover his whereabouts as he is homeless. However, his lover could discover exactly why Ben doesn’t have a proper roof over his head.

The drama began with Aaron and Ben arranging another rendezvous but the latter had to make a mysterious phone call.

“I’m sorry, I can’t come home right now, I’m working,” he began, although viewers have no idea who the person was on the other end of the line.

“Don’t be stupid, you know I care and I’ll try and work something out. See you soon,” he added before putting down the phone.

When he returned to his boyfriend, Ben told him he had to go as there had been a leak at his flat and dashed off to go and sort it out.

With Aaron left on his lonesome, Amy Wyatt (Natalie Ann Jamieson) and Matty Barton (Ash Palmisciano) quizzed him about why he never goes over to his lover’s house.

As the heartthrob explained he doesn’t know where his boyfriend lives, Amy had an idea to get some answers.

Accessing the employment server for The Hop activity centre, she found out where Ben lives but it was not where Aaron previously thought.

Unfortunately for the amateur sleuths, the mysterious character walked in on them and threatened to tell the bosses of the establishment.

Furious with his boyfriend, Ben said: “You should have called and asked [for my address] instead of making out you hardly know me.”

Aaron hit back as he asked: “Do I know you? You told me you lived in Hotton and you told Amy you lived [somewhere else].”

I care about us

“When we checked it out, she was right,” the heartthrob continued, but Ben began to sweat and made up more lies.

Unfortunately for him, Aaron saw right through everything and asked: “What’s going on Ben? What aren’t you telling me?”

Adding yet more lies to the pile he had already created, the kayak instructor said: “I didn’t tell you where I lived because I didn’t want you coming round there.”

“Why? Because it’s a dive? You told me that a couple of weeks ago and I said I didn’t care,” Aaron replied.

“That doesn’t stop me from being embarrassed about it. Yours is a palace compared to mine and if you saw it, you would think I’m a loser.”

“It’s my housemate, too. I told you, he gets funny about me having people over,” Ben said as he continued with his lies.

“I told you, I don’t care about that either. I care about us,” Aaron remarked, stating he was hurt by the lies.

The heartthrob decided to bring up the mysterious man who was lingering around Ben at the village Pride event but the kayak instructor explained he didn’t know him.

With the mechanic seemingly falling for the charade, he told his boyfriend this wasn’t a “dealbreaker” but going forward, there were to be no more lies.

Ben agreed but by the end of the episode, he was seen taking his belongings to an abandoned shed in the middle of the woods.

Speaking on the phone to Aaron, he said: “I’m not doing anything much. I’m back at mine now and about to cook myself some food.”

Looking in on a makeshift set-up, the kayak instructor remarked: “Home sweet home,” as it was revealed he is homeless.

However, this could be because Ben has tied the knot to the man who Aaron was sceptical of at Pride and the couple might be going through a marriage breakdown.

If this is the case, Aaron’s boyfriend has been playing away from home and been leading a completely different life in the village.

Moving out of the marital home, the love rat could be taking refuge in the woods until he makes up his mind about whether to pursue a life with his boyfriend or his husband.

Unfortunately, his lies could catch up with him once more as Aaron continues to have doubts about where his partner lives.

As a result, he might follow his boyfriend home one day and discover he is living in the shed in the woods.

Confronting Ben and wanting 100 per cent honesty, the mechanic could learn the truth he is wound up in a marriage breakdown.

Having recently gone through his own divorce with Robert Sugden (Ryan Hawley), the heartthrob will be wanting to avoid anything related.

Could this be the end of yet another relationship for Aaron as he is unable to accept his partner has been leading a double-life?