Both Debbie and Faith were caught in the headlights as the former admitted to being involved in Ross’s acid attack, whilst the latter was revealed as Kim Tate’s shoving assailant. 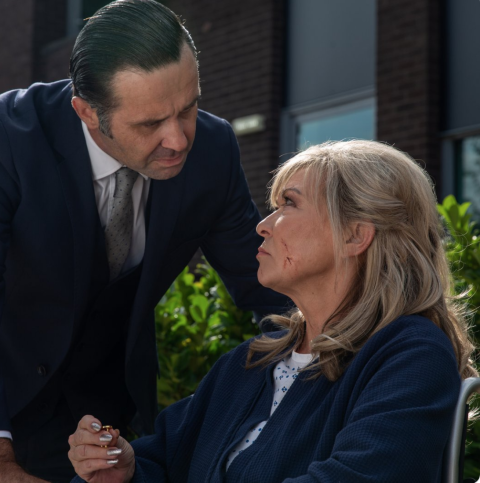 Speaking to Charity in the kitchen, Faith’s subtlety was something to be desired after she waxed lyrical about how everyone “wanted to give that witch a shove”. Connecting the dots, Charity questioned Faith’s innocence, to which she flat-out confessed to doing the deed.

Fans posting on Twitter were quick to react, loving the fact Faith showed some genuine menace after it emerged she was the culprit.

Elsewhere, Debbie was arrested – many viewers thought it was about time – and decided to confess about her part in Ross’s devastating acid attack.

She pleaded: “Ross was never supposed to get hurt, but it’s my fault that he did. The acid should never have happened.”

As you can see, some social media users were rather smug with how things unfolded for Debbie.

Just to spice things up even more, although Kim survived the fall she’s now been banged up for driving without any car insurance.

However, if you thought that was the end of scheming Kim, think again, as it’s also been confirmed that she’ll return to the village next year after serving her jail sentence.

Digital Spy Soap Scoop video – hit play below for all the latest Emmerdale spoilers, as Victoria finds herself in danger and Sarah is finally getting a new heart.