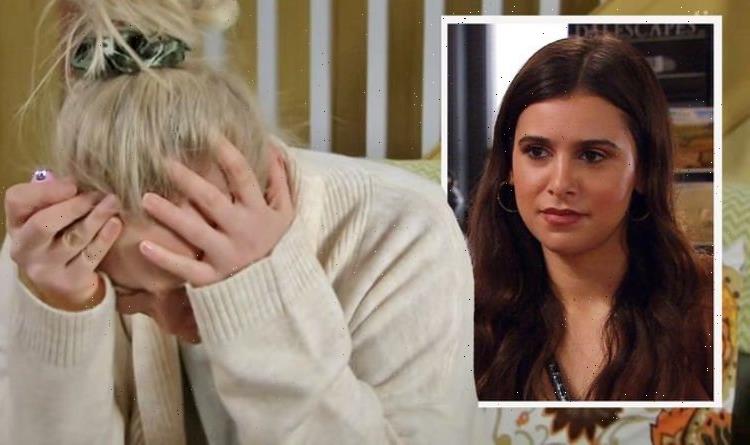 Emmerdale has announced Meena Jutla (played by Paige Sandra) will kidnap her boyfriend, David Metcalfe’s (Matthew Wolfenden) baby next week in a bid to teach him a lesson and play the hero again. The village nurse gets overwhelmingly jealous when she finds out David has been spending time with Victoria Sugden (Isobel Hodgins) – organising childcare for their two children – and decides to sabotage David’s trust in Victoria by snatching Theo while he is in her care. When Express.co.uk and other press spoke to the actress who plays Meena about this storyline, she was asked how dark Meena would go in order to receive David’s attention, and if she was willing to kidnap a child, would she kill one? In a dark twist, could ITV viewers see her target one of David’s exes next?

With only one place left in their preferred nursery, David and Victoria are arguing over whose child deserves the place.

But before long, Chas Dingle (Lucy Pargeter) reveals her daughter, Eve has been given it and David and Victoria are left stuck.

Having both got full-time jobs, David and Victoria decided to draw up a rota and look after each other’s babies while the other works a shift.

And when Meena drops by the shop for a steamy afternoon with her boyfriend, she is furious to find out he is babysitting instead.

Realising she needs to play her cards cleverly the next day Meena phones David to offer to have Theo but he doesn’t answer her call.

Instead, from the other side of the village, Meena spots him rejecting her call to continue talking to Victoria and viewers will see Meena overtaken with jealousy and anger.

Later that day, when Victoria is in charge of both children, she goes upstairs to check on Harry leaving Theo alone and this is when Meena strikes.

Creeping through the back door, the murderer looms over Theo and picks him up, leaving the cottage with him in tow.

And when Victoria returns downstairs, she is horrified to see Theo is gone and she bursts outside to try and find him, to no avail.

She soon starts to scream in panic and a desperate search ensues with several villagers.

After a few hours of blind panic, Meena will eventually return with Theo in her arms, playing the hero once more.

It won’t be too long before David finds out what Meena has been up to, but how is he going to react?

The actress who plays Meena said: “I think devastation for everything that Meena’s done, she’s gone after two of his children and manipulated him, orchestrated his life to be in her favour.

“She’s done really, really awful things to him and to the people that he loves, and especially with his history with Maya, it’s going to be massive devastation and massive heartbreak [for him].”

As for whether Meena would ever kill a child, Paige remarked: “I definitely think she would kill a child, she has no empathy at all – she doesn’t care – she can’t, she literally cannot empathise.

“The way I played that scene was I believe Meena deliberated between just kidnapping Theo or killing him and making it look like an accident, because the benefit of that for her would be David wouldn’t be able to forgive Victoria, that means she would be out of his life.

“But I believe the reason she didn’t go there is because then David would be grieving and that would be really boring and annoying and [she’d] have to look like she cares and that isn’t great for [Meena] so maybe the best thing is just kidnap.”

But, in kidnapping Theo, Meena has destroyed David’s trust in Victoria, thus causing an issue for his childcare arrangements.

Feeling as if he cannot leave Theo in Victoria’s care anymore, will David turn to another mother in the village to help him out?

Perhaps he will come to a new childcare arrangement wth Tracy instead?

Should this be the case and Meena finds out, jealousy is bound to raise its ugly head again.

Could baby Frankie be in danger and Tracy left being blamed?

In recent months, Tracy’s mental wellbeing has been questioned – with some viewers suggesting she is suffering from post natal depression.

In one episode, Tracy feared her baby was scared of her, worried Frankie thought the new mother would accidentally scratch her again.

Tracy explained she “couldn’t do this… couldn’t keep [Frankie safe” and admitted she “can’t cope”.

This would be a perfect coverup should Meena target Frankie next, especially considering Meena is a nurse and can use this as her advantage to visit Tracy on regular occasions.