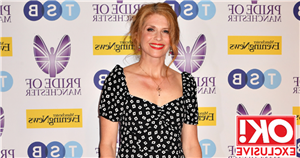 Emmerdale star Samantha Giles has finally lifted the lid on her recent comments surrounding the ongoing Meena Jutla storyline, while appearing at this evening’s Pride of Manchester awards.

The actress, who is best known for playing Bernice Blackstock in the soap, recently came under fire from fans after she told the Wonderbirds YouTube show that the storyline needed to end.

In controversial comments, when asked about the storyline which saw Mean Jutla claim the lives of several villagers, the star said: “It’s terrible, I’m in the show and I don’t really ever watch it, which is awful. You know what it’s like, it’s that time when you’re either putting the kids to bed or you’re getting dinner or whatever, but I know that it’s very close to coming to a head."

“I think it’s probably timely – lots of people have said that they’ve enjoyed it, but you know, come on, it’s time for it to end."

The comments did not go down well with many fans, with villainous Meena, played by Paige Sandhu, proving to be a highly popular addition to the cast.

On Tuesday night, Samantha finally addressed the remarks as she attended the swanky Pride of Manchester awards bash at Kimpton Clocktower Hotel, in the city centre.

When asked about how she felt and the comments she’d made previously, Samantha told OK!: “I was only expressing what people had said to me. You know, I think when people know who the baddie is, they’re kind of desperate for it to sort of get resolved and for people to get their comeuppance.”

“So yeah, I think it’s been a brilliant story, and I think it’s gone down really, really well. I mean, it’s going to be sad that Paige has gone, since she’s a lovely girl and a great actress – but I think she’s going to go on to big things.”

The star was also pressed about what we can expect on the soap in the coming weeks, but Samantha once again reiterated she’s kept so busy she barely gets a chance to tune in.

“I’ve got no idea what’s going on. I only read my bits,” joked Samantha.

“I don’t know what’s going on! I’m a little busy at the moment, so there’s a few things going on for Bernice and a bit of comedy. I don’t watch the show very often, I don’t get a chance to watch it!”

With exciting things already on the radar for many cast members as part of this week’s nail biting flash forward week, soap fans are in for a real treat as they watch the sinister goings on in the dales unfold – with the show even promising that one character would lose their life.

So far there’s no concrete news as to who this is, but speculation has been rife among fans of the soap that it could be an escalation of Al Chapman and Cain Dingle’s feud that gets out of hand. Another popular theory is that Noah Dingle’s stalking might ramp up a notch, with the troubled youngster resorting to desperate measures to get what he wants.

The MEN Pride of Manchester Awards, in partnership with TSB, will premiere on YouTube at 7pm on Tuesday 17th May.