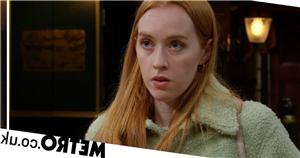 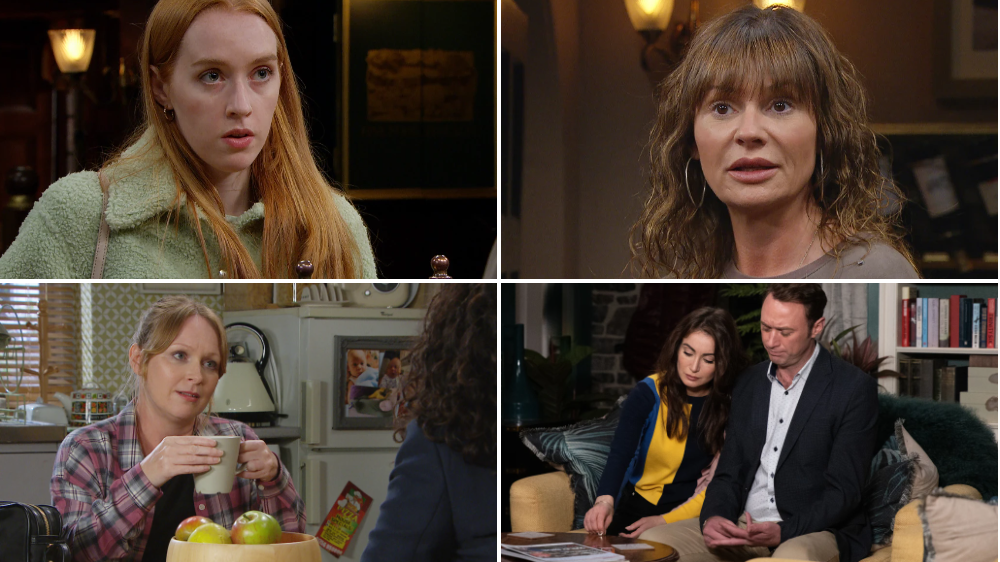 Chloe accuses Priya of having an affair with Al. In a prison visitors Room, Cain’s furious to see Chas waiting for him and when she talks about missing Al he tells her he wants nothing to do with her.

Later, Rishi rushes back inside the cafe after dropping his and Amba’s hot chocolate, leaving happy Amba alone with her new mittens.

Chloe finds her alone and takes her back to Keepers. Panic rises as an anxious Rishi soon realises Amba is missing and Priya is furious to find Amba with defiant Chloe. Priya warns Chloe off.

Lonely and isolated Chloe tries to talk to Kerry on the phone.

It’s tense as Leyla and Liam spend time together but their conversation soon runs out of steam.

Lydia hides items that she’s bought for baby Esther from Samson. Sam and Lydia are determined to love baby Esther even if Samson can’t.

Amelia softens towards Sam and Lydia when she opens their gift for baby Esther. Samson feels betrayed when he sees Lydia, Sam, Dan, Amelia and baby Esther together in the café.

Lydia is determined to make Samson see that Esther is part of their family whether he likes it or not.

Marlon worries about his job at the Woolpack going to some other candidate.

David shuffles through the post in the shop until he comes to a letter addressed to Victoria from the Police ticketing office.

David feels wretched after reading the police fixed penalty notice addressed to Victoria. When Jacob and Victoria enter and reveal their plans to support David with his delivery scheme, David is overwhelmed with shame.

Though they’ve tried, Leyla’s tearful as Liam declares their relationship is defined by tragedy, grief, loss and lies.

They both come to the conclusion that they’re no good for one other. Liam and Leyla both reel from the magnitude of their decision. As they remove their wedding rings, both are heartbroken that it’s come to this.

The next day Chloe comes by determined to find out the truth about Al and Priya proves her innocence by cross checking Al’s bank statements.

Priya is empathetic towards Chloe as she agrees it does look like he was playing away from home and Chloe realises she knows who the woman is… Over at the Woolpack, as the door slams open manic Chloe appears revealing she knows who Al was seeing.

At the hospital, as the sound of a heart beating fills the room, Chloe is overcome with emotion at her sonogram.

Charity catches up with Chloe and promises not to reveal her secret. Chloe tightens when oblivious Charity asks who the father is…

Samson is torn to realise he doesn’t have a place there.

Marlon helps Victoria and Rhona’s delighted to see him with a purpose again.

Mackenzie has to force himself to remain calm when Charity reveals Chloe’s pregnant. At Keepers, Mackenzie despairs as Chloe confirms the baby is his and she’s keeping it.

Alarmed to find out that Kerry knows the truth, Chloe reassures Mackenzie that she won’t reveal anything but Mackenzie is left feeling anxious. Later, Mackenzie approaches Charity and takes a moment to compose himself.

Urging Charity to take a seat he looks at her, desperately hoping he’s about to do the right thing…

Harry injures himself in David’s care. Hating himself, David knows he’s messed up. As Victoria rushes to Harry she drives through some temporary traffic lights, only to be stopped by a waiting police car.

Victoria concedes to a fine and points on her licence, her focus on getting to Harry as quickly as possible.

Victoria rushes through the hospital to find a lethargic Harry, watched over by concerned David. Victoria is furious to learn that David opened the shop, leaving the children unsupervised.

David dreads telling Victoria the truth, when he learns she’s received six points on her licence.

Priya’s heart goes out to Leyla, who is close to tears.

Noah and Amelia share a moment with baby Esther.