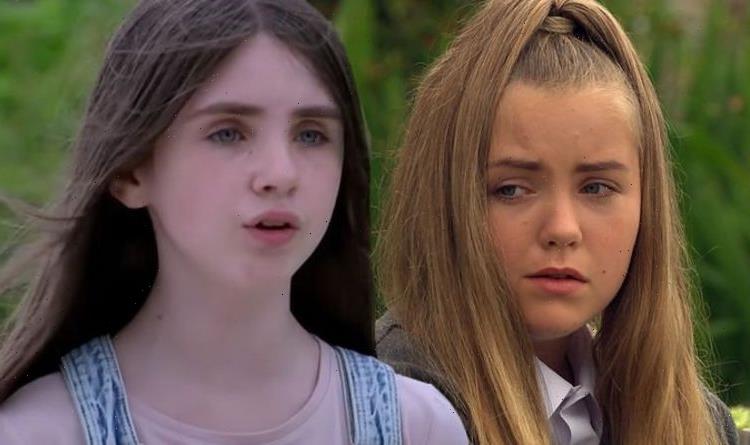 Emmerdale: Cathy tells April a new account has been made

In recent weeks, Emmerdale viewers have seen April Dingle (played by Amelia Flanagan) has been broken as she has endured horrific bullying online over the death of her mother Donna (Verity Rushworth). Fans know it has been Cathy Hope (Gabrielle Dowling) who has been sending horrible messages to her friend but April is yet to learn the truth. How will she react when she learns Cathy is behind the abuse?

Upcoming episodes of Emmerdale will show April become suspicious over the identity of her bully.

Her phone pings with messages and she realises her number has been posted online and she thinks this means she must know her bully.

Cathy looks increasingly worried by this as viewers will learn not many people have April’s number, which narrows down the suspect list.

April, overwhelmed and nauseous from the bullying, returns home early from school without notice.

Believing Cathy is April’s friend, Marlon leaves the two girls alone hoping his daughter can find some comfort from her pal.

However, April breaks down in tears as she continues to receive horrific messages and Cathy realises the true extent of what her bullying has done.

Realising how much emotional damage she has caused April, Cathy is left guilt-ridden and quickly flees.

Cathy goes to the cafe to find her brother Heath and admits she is responsible for bullying April.

It’s not known yet how Heath will react to his sister’s admission but he is likely to try and help her out.

The siblings are close and Heath will not want to see his sister in trouble.

Could he suggest Cathy stops the bullying and hope it all dies down and April is able to go on with her life?

Or, could he tell dad Bob (Tony Audenshaw) about Cathy’s cruel behaviour?

Either way, with Marlon determined to find out who is hurting his daughter it surely won’t be long before Cathy is found out.

April tried to be strong and act like the bullying did not get to her at first but it has slowly worn her down.

If she learns Cathy, who she believes is a close friend, has been behind her traumatic ordeal, how will she react?

April’s mother was a police officer and the youngster may believe she needs justice.

Could she attack Cathy wanting to harm her for causing so much emotional distress?

April could seriously harm Cathy and leave her for dead in revenge attack.

The youngster has always been seen as shy and timid but after she has been so badly betrayed, there’s no knowing what she might do.

If April did murder Cathy, would her father Marlon try to cover it up to protect her or could they make it look like an accident?