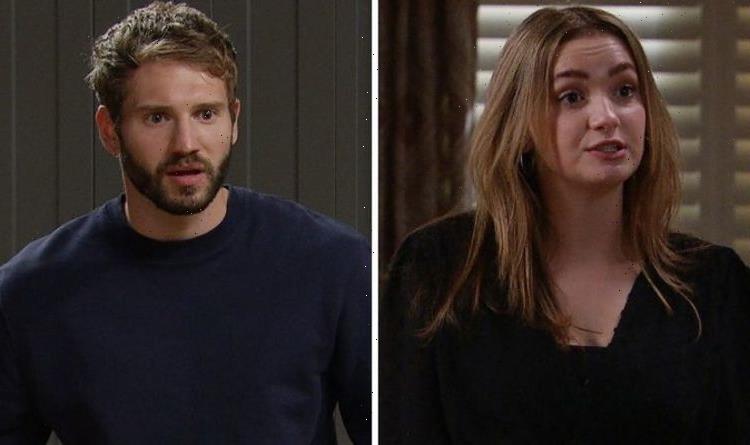 Jamies Tate (played by Alex Lincoln) is still presumed to be dead by his mum Kim Tate (Claire King) and the mother of his newborn baby Gabby Thomas (Rosie Bentham) after his car crashed into a river. However, Thursday’s Emmerdale episode revealed that Jamie is actually alive and well after being reunited with daughter Mille (Willow Bell) in a dramatic twist. Will he try and convince Millie to kidnap Thomas from Gabby so they can start a new life together?

On Thursday’s instalment of Emmerdale viewers saw Millie reunited with her missing – and presumed dead – father Jamie in a shocking twist.

Jamie’s mother Kim remains in the dark that her son is alive – although she has been suspecting he is for weeks.

However, when Jamie failed to turn up to Andrea Tate’s (Anna Nightingale) memorial Kim resigned herself to the fact he is dead.

Fans of the ITV soap will know Andrea was recently killed on an adventure weekend gone wrong. As a result, Kim has been looking after her now orphaned granddaughter Millie.

However, on Wednesday’s instalment of the soap Andrea’s mother Hazel (Kate Anthony) arrived and revealed she’d be taking Millie away.

Little does Kim know that Millie has been taken into the care of her father Jamie.

During Thursday’s episode, Kim broke down in tears over Millie and Jamie saying: “I just don’t want Millie to forget him.

At the end of the episode, Hazel arrived at a house with Millie and told the youngster she had a surprise for her.

She was stunned to be greeted on the doorstep by Jamie who she hasn’t seen since his car careered into a lake.

Jamie smiled at Millie who was starring up at him in confusion and said: “Hello Mills.”

A shocked Millie replied: “Daddy, were you here all the time? Granny said you were in an accident.”

“Oh dear, did Granny come here worrying about me – that must have been terrible for her?” Jamie added.

Jamie then asked Millie to give him a big hug and she told him she’d missed him while they embraced.

“I’ve missed you too sweetheart and I promise I won’t ever leave you again,” he told his daughter.

When Millie went inside the house he asked Hazel how Kim dealt with Millie being taken away from her and she explained she “put up a fight” but they “got there in the end”.

“It’s finally over, I never have to step foot in that hellhole of a house again,” Jamie sighed.

Jamie now has Millie by his side, but will he also want to have his newborn son Thomas living with him?

He clearly doesn’t want Kim or Gabby to know he’s alive, so will he sink to new lows and get Millie to kidnap Thomas so they can start a new life as a trio?