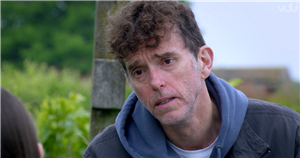 Recently in the village, the youngster has been targeted by a vile troll where she was sent a sick meme of her late mother Donna and a social media account was even created named Dead Donna.

On Tuesday's episode, Marlon overheard Cathy Hope, who fans have predicted is the online bully, talking about April's ordeal in the The Woolpack pub.

After discovering what had been going on, Marlon said: "I don't believe this, weeks? What gives people the right to say such disgusting things about April and Donna. Don't they have any decency. Why didn't you tell anyone?"

The concerned father then found his emotional daughter at Donna's grave as he gently asked her about the online trolling, letting her know she could have told him.

The youngster admitted she was "scared" and that she "didn't know what to do" to which a tearful Marlon said: "I'm your dad, I promised your mum I'd protect you and I've let you down.

"You do know none of this is true, don't you. You are one million times better than all of those bullies put together. I'm not going to let them hurt you again, I promise."

Marlon then confiscated April's mobile and deleted her accounts, saying: "Don't worry, we will give it a few weeks for it all to go away, then you can have your mobile back.

"Until then, I want you to spend all your spare time being you. Think you can do that for me? I will try my best never to let you down again, it's what your mum would have wanted."

Viewers were left in tears over the scenes as they took to Twitter to praise the emotional moment between Marlon and April, as well as the two stars who portray the characters.

One person said: "#Emmerdale god that scene between Marlon and April Crikey" followed by a series of crying emojis.

A different fan put: "Wow this is a tearjerker tonight ~ brilliant acting from the young actress who plays April and Marlon is just so lovely #Emmerdale."

Another follower commented: "Marlon and April getting me right in the feels #Emmerdale."

While a different account added: "This is so heartbreaking but I'm so happy Marlon knows now and April can fall back on her dad when things get tough!! #Emmerdale @emmerdale."

It comes after fans predicted that Cathy could be April's online bully, explaining why she has been so supportive — to cover her back.

One person said: "I bet Cathy is behind the trolling. #Emmerdale."

A different fan put: "How obvious that Cathy is trolling April #Emmerdale."

Another follower commented: "I still think Cathy is involved in this bullying storyline someone.. is it a fake helping hand she’s giving April? #emmerdale."

While a different account added: "Cathy defending April could that be a guilty conscience? #Emmerdale."

The story has got a while to run, so fans will have to wait to see if whoever is terrorising April is close to home.

Emmerdale continues on weekdays at 7pm on ITV.

For all your updates on Emmerdale, sign up to our daily OK! newsletter.