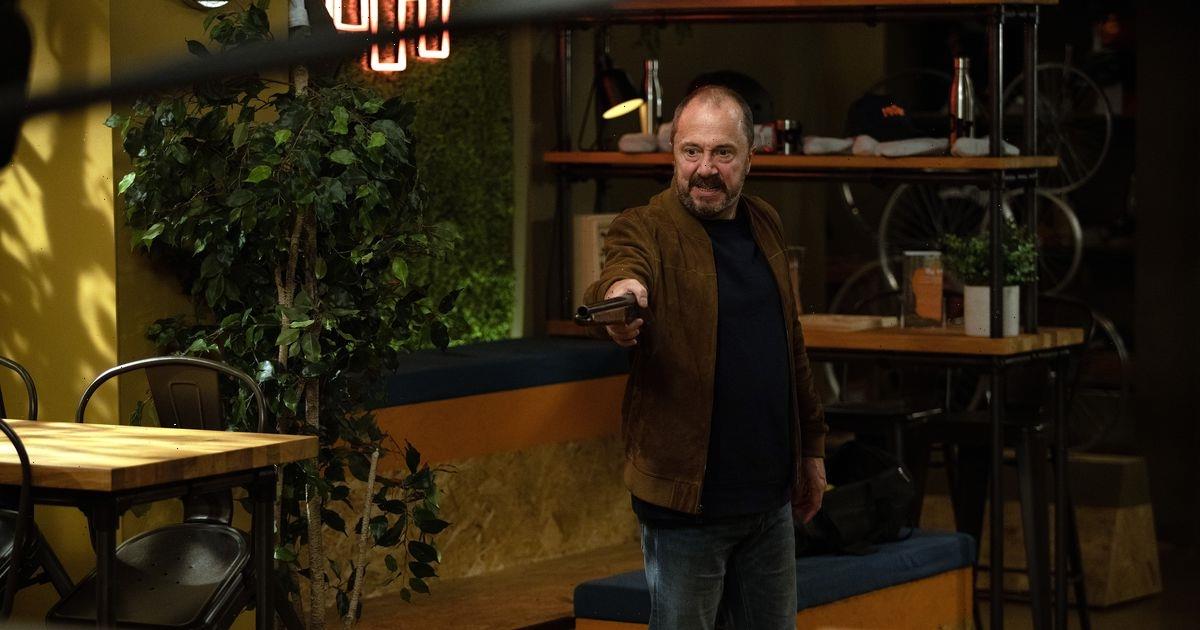 The frightened women get trapped at The Hide café as Wendy's ex Russ resorts to drastic lengths to get the money he wants.

Viewers have seen Russ arrive in the village in the hope of seizing the inheritance money that his late mother left to Victoria's baby son Harry.

In upcoming scenes, the new village villain continues to increase the pressure by telling Wendy that he's on the run because he shot a policeman during an armed robbery at a jewellery store.

Wendy is left more terrified than ever, realising that Russ is more dangerous than she'd imagined.

After Russ makes his demands, Wendy encourages Victoria to give Russ the money he needs.

Still putting on an act, Russ pretends to be overwhelmed with gratitude towards Victoria.

Later, Wendy struggles with her conscience after playing her role in tricking Victoria to give up the money.

Arriving at The Hide, Wendy urges Victoria not to proceed with the plan.

She admits that Russ has been blackmailing her with a secret that could ruin her life.

Opening up about Wendy's secret, actress Susan Cookson told Daily Star and other press: "Russ threatens Wendy that he's going to tell Victoria her secret but in the end Wendy tells Victoria herself.

"Victoria is disgusted at the way Russ' blackmailed Wendy but it equally makes Victoria sit up and think hang on a minute who is this woman?"

Russ later turns up and demands to know why the money hasn't been transferred as planned.

As things turn nasty, Russ pulls out a gun, steals Victoria and Wendy's phones, then secures the door to The Hide so there's no escape.

Russ points the gun at Victoria and demands that she arranges the transfer as promised.

Outside, Jacob Gallagher, Dan Spencer and Bob Hope are horrified to hear a shot ring out. Will everyone make it out alive?

Opening up about filming the scenes, Susan explained: "There's an element of if anything goes wrong, it's going to go really wrong.

"There's also another terrifying thread going on in The Hide, which we can't tell you about, but it's very scary for Victoria."

Isabel Hodgins, who plays Victoria in the ITV soap, added: "It's terrifying, exciting and you just don't know how far it's going to go. It's going to be an edge of your seat moment.

"Victoria has got so much to live for and for that to possibly be taken away from her is awful.

She went on to tease: "If it was ones time it would be bitter sweet because you'd be gutted to be leaving but also thinking this is so juicy and it's going to be great."

Fans will have to wait and see if both women survive.