Ellen Pompeo is already signed on for Grey’s Anatomy season 16 and she intends to honor that commitment—and maybe even continue past it.

Pompeo was on The Ellen DeGeneres Show and told the host “of course” there would be a season 16—ABC has yet to officially order one—but with the ratings, both on broadcast and streaming, “there’s just no end in sight,” Pompeo said. “The show is so popular.”

The actress, who also produces and has served as director on Grey’s Anatomy, said she loves visiting with Ellen DeGeneres so she can say thank you to fans. “Everywhere I go, whether it’s Italy, whether it’s France, London, Kansas,” she said, “the people that come up to me with tears in their eyes and tell me how meaningful the show is to them…” 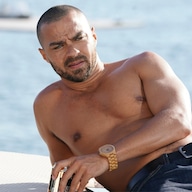 Pompeo told DeGeneres that the first episode of Grey’s she directed featured a young gay actor playing a gay character and after shooting on the episode was complete, the teen actor said he watched Grey’s Anatomy with his parents for his whole life. The actor said he’s used the show “as a way to tell my parents that I was gay,” and to show my parents it’s OK, that I’m not different, there’s nothing wrong with me.” She said the young man told her Grey’s Anatomy helped his parents understand what it meant to have a gay son, that it wasn’t a bad thing, and now for his parents to see him on the show as an actor, it’s “just been everything,” Pompeo relayed.

“I got to keep doing it, man, because we’re touching lives and making a difference,” Pompeo told DeGeneres with tears in her eyes about her future with the show.

E! News caught up with Pompeo at the GLSEN Respect Awards where she was honored for her activism in support of the LGBTQ community and she told us about how she approaches her future with the ABC medical drama: “I take it day by day and season by season.”

Pompeo previously hinted season 16 could be the last. “I’m clearly not prepared right now to make any kind of formal announcement about what my future is on the show, but I am really feeling like we have told the majority of the stories we can tell,” Pompeo told EW. “It’s about time that I mix it up. I’m definitely looking for a change.”

Series creator Shonda Rhimes said she has a pact with Pompeo about the end of the series. “Ellen and I have a pact that I’m going to do the show as long as she’s going to do the show,” Rhimes said. “So, the show will exist as long as both of us want to do it. If she wants to stop, we’re stopping. So, I don’t know if we’ll see 600, but I want to keep it feeling fresh. As long as there are fresh stories to tell and as long as we’re both excited about the stories being told, we’re in. So, we’ll see where that takes us.”