During Tuesday’s episode, Piers Morgan and Matt Hancock became embroiled in a fiery row when the Health Secretary claimed he and his team should be “thanked” for their roles in combatting the pandemic. Inevitably, Piers didn’t see things the same way and furiously blasted the MP for being “disingenuous” and “patronising”. However, when Piers discussed the moment with a panel of guests on Wednesday’s edition, Edwina Currie was the one who leapt to Mr Hancock’s defence.

“He didn’t ask to be thanked personally, he asked for his team to be thanked,” Edwina furiously snapped at Piers after he played the GMB clip again.

Piers began to speak over Edwina to try and make his case, but the journalist wasn’t going to let him without a fight as she hit back: “Let me talk.”

When Edwina brought up the fact that PPE had been sent out eventually despite its challenges, Piers insisted: “That was Kate Bingham, (rather than Mr Hancock).”

But Edwina felt this supported her point as she barked at Piers: “That’s his team! He asked for his team to be recognised.” 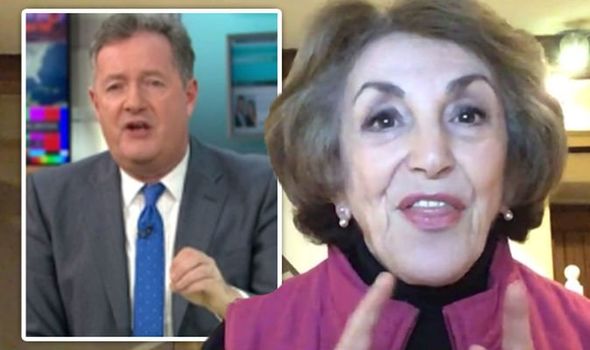 Clarifying his point further, Piers did praise the Government’s vaccine rollout but insisted his criticism stemmed from the fact Mr Hancock was judged to have acted “unlawfully” in the publication of PPE contracts.

“The vaccine work has been fantastic,” Piers said to Edwina as she questioned his negative attitude to the Government’s handling of the pandemic. “We are talking about Matt Hancock breaking the law.”

“Piers, darling, you are a very responsible person – if you were in charge of PPE last year, you’d have done exactly the same,

“You’d have made sure we got the PPE we could,” she claimed.