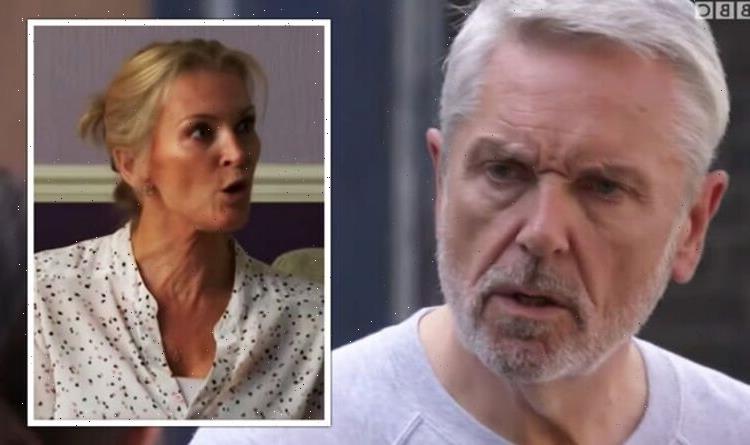 June Brown was the 'definition of EastEnders' says Diane Parish

Kathy (played by Gillian Taylforth) and Rocky (Brian Conley) found themselves getting closer on Tuesday’s instalment of EastEnders when the former lovers were locked in an office for hours. Jean Slater (Gillian Wright) was the character who devised a cunning plan which would bring the pair together and she took her time before unlocking the door. However, when Kathy thought Rocky was responsible for locking them in and causing her to miss Tina Carter’s (Luisa Bradshaw-White) funeral, she was left seething. Is it too late to repair their relationship?

EastEnders fans will know Kathy has struggled to forgive Rocky for tricking Sonia Fowler (Natalie Cassidy) into making her think he was her biological father.

Rocky has been determined to make amends for his actions and has developed parent feelings towards Sonia.

However, both Kathy and Sonia have made it clear they do not want anything to do with him.

Rocky almost turned it around on Tuesday’s episode of the soap after he opened up to Kathy while being stuck inside a portable office.

During the instalment Kathy said: “If I could just go back and talk to Tina, knowing what I know now about the attack.”

When Rocky made a jibe about Phil Mitchell (Steve McFadden) Kathy replied: “You can say what you like about Phil, but he would have this door open by now.”

“Well you want me to be more like him, is that it?” Rocky fumed.

“I suppose I could shave my head but I won’t look like him because I am too handsome.”

The pair started laughing together following Rocky’s remark and began reminiscing about Tina.

“I hope she is at peace, wherever she is, after all that time alone,” Kathy said of Tina as she started to tear up.

Later on in the episode, the couple continued to have a heart to heart about their lives while they were locked in the office.

Kathy said: “You are your best when you are being serious, and being honest. Just keep trying, yeah?”

Just as Kathy and Rocky appeared to be getting on well, Harvey Monroe (Ross Boatman) stormed into the office after finding the keys which Jean had hidden.

“I’m so sorry, I was asked to lock up but I didn’t think anyone was in here,” he said in a panic.

Kathy and Rocky reunited later in the episode and admitted they both had a “nice time against the odds”.

Rocky joked: “I am going to have to tell Harvey to lock us in for a bit longer next time.”

However, his comment did not sit well with Kathy who replied: “The next time? You didn’t. No wonder Harvey looked so guilty and Jean looked so smug.”

While Rocky stressed he did not lock them in the office on purpose, Kathy failed to believe him and continued to yell at him before ordering him to leave.

Could Rocky’s failed attempt at patching up their relationship cause Kathy to leave Walford for good and live near her son Ian Beale (Adam Woodyatt)?

Perhaps it would be easier to move on from Rocky if she is far away from Albert Square.

EastEnders airs Mondays to Thursdays on BBC One at 7.30pm.