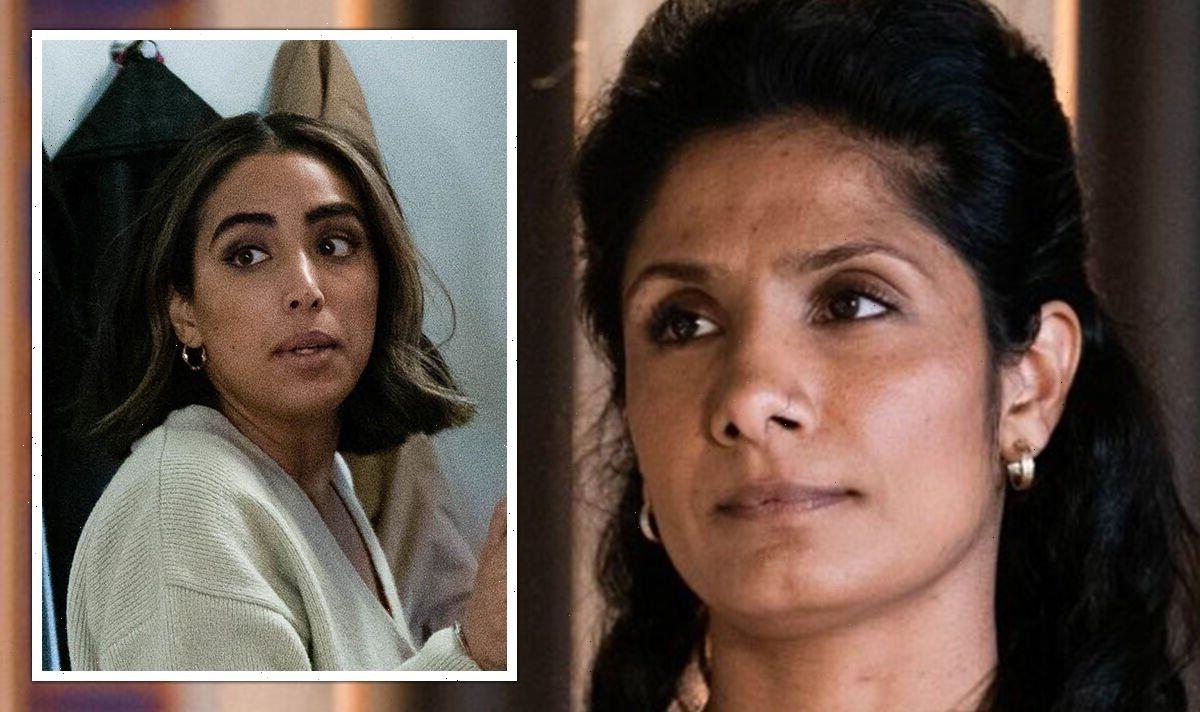 Ash (played by Gurlaine Kaur Garcha) made her comeback to the square this week, having left Walford back in January after being subjected to a homophobic attack. The attack and turbulent relationship with her mother Suki (Balvinder Sopal) left Ash wanting a fresh start. However, now she has returned, official BBC soap spoilers reveal the peace she had found is soon to be shattered.

In upcoming scenes, which are set to air next week, Suki is riled by Ash’s tone when they begin talking about Dotty Cotton (Millie Zero) settling into their family.

Furious at the conversation, Ash storms out of their house, leaving her curious mother to go through her bag.

Elsewhere, Ash asks her brother Vinny Panesar (Shiv Jalota) if she can borrow some money, but as he hands her the cash, Suki confronts Ash about her secret.

The pair come to blows, and Vinny snatches back the money, trying to hide what they had been talking about.

What could Ash be hiding that has made her mother so furious?

With Ash asking Vinny for money, could she be in trouble financially?

Does Ash want to get revenge on her mother after her affair with Peter Beale (Dayle Hudson)?

Recently, Vinny has been seen trying to get Dotty’s affection, despite the fact she has a habit of leading him on.

Suki also recently took a backseat from the spotlight, just as her former employee Honey Mitchell (Emma Barton) picked another job over a spot at the Minute Mart.

Upon Ash’s return, Suki began talking about her daughter’s 30th birthday with Dotty and Vinny.

She later turned up unexpectedly and proceeded to make amends with her family after not leaving on good terms.

After an intense confrontation about her mother’s affair with Peter, she decided to exit Walford to go to Leeds to pursue a new job opportunity.

Fans theorised that Ash and actress Gurlaine had left Walford permanently until she recently confirmed that she would be returning.

Viewers also recently saw Suki receive a letter which informed her estranged ex-husband Nishandeep was being released from prison after serving time for murder.

Suki kept the news a secret from her family but confided in lawyer Eve Unwin (Heather Peace), who informed her she would have to prove he was a danger to her family for her to get an order of protection.

“Kids don’t know the real him, but that hasn’t stopped them from building him into something he’s not,” she explained to Eve.

Suki asked Eve if she could just ask the probation officer to keep him away from her and the family, but Eve told her: “You’d have to do a lot more than that to actually stop him.”

Later, Suki returned home to find Ash had returned to Walford. Ash tried to mend fences by revealing spending time with her nephew made her realise that “it’s not easy raising kids on your own”.

“I know we don’t see eye to eye on everything, but there’s more that unites us than divides us,” she reckoned.

With Ash back and trying to mend their relationship, could their bond be split further apart if she finds out the truth about her father?

EastEnders airs Monday, Tuesday, Wednesday and Thursday from 7:30pm on BBC One.