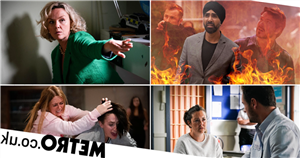 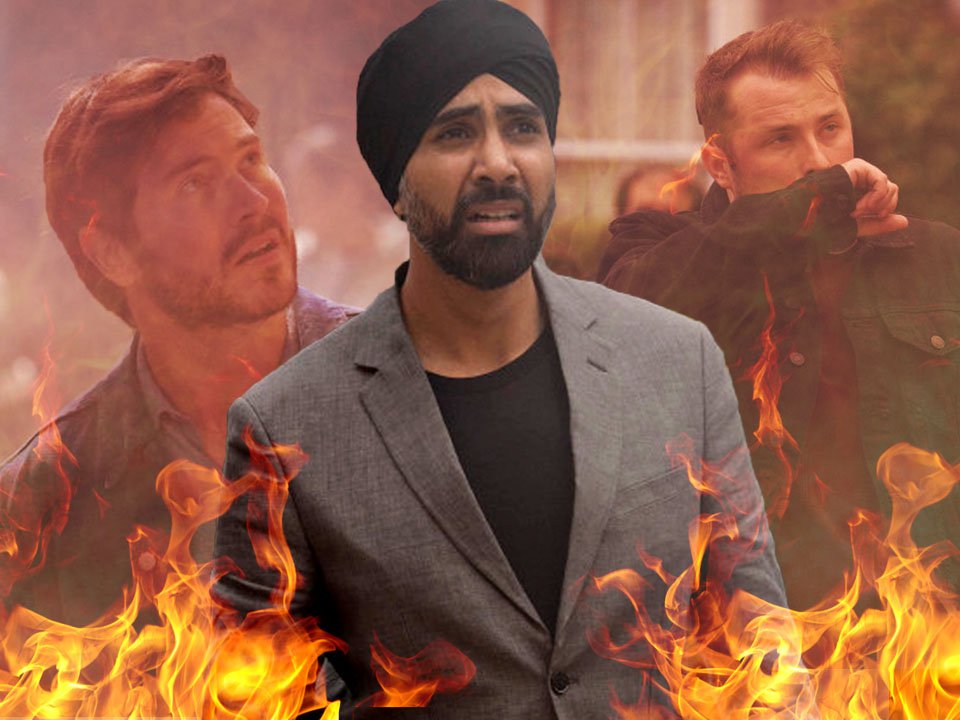 EastEnders airs an explosive week as flames take hold in the Mitchell house. As more residents race to the rescue while Phil Mitchell (Steve McFadden) lies unconscious, several people are trapped when a blast tears apart the house.

Elsewhere, as Ruby Allen (Louisa Lytton) faces a downfall after some good news, is jailed Stacey Slater (Lacey Turner) behind it as Martin Fowler (James Bye) learns the truth?

Phil is still unconscious as the fire spreads. He wakes up and struggles to breathe. When Ben and Callum notice the flames, they get closer to investigate.

Soon afterwards, the flames get dangerously close to a gas canister and an explosion goes off.

Janine confronts Scarlett and Tommy in Tommy’s bedroom. Tommy takes action by locking the door and disposing of the key through a crack in the floorboards.

This leaves all three trapped in the room and desperate to find the key again. Will they manage to escape?

Gray finds flowers on the doorstep on the anniversary of Chantelle’s death. Gray realises Kheerat may have been responsible when Whitney reveals she saw him nearby.

Gray confronts Kheerat, who gets distracted when he spots the fire. Gray and Kheerat head inside, but will they find themselves in danger?

Linda experiences contractions as Jack continues to demand answers over who the father of her baby is. As Linda denies Jack’s suspicions, her waters break.

Jean is brought in by the police over a possible drug offence.

At the police station, Jean refuses to make any comment over the marijuana which has been found in her garage. When Jean makes to leave, she collapses.

Lily tells Martin that she got the weed from Jean’s place and Ruby knew about this. Ruby tries to explain herself, but her excuses don’t make sense to Martin.

Later, Martin spots a text on Ruby’s phone from the police, thanking her for her help in a drugs-related case where an arrest has been made.

Martin is furious over Ruby’s behaviour and pays a secret visit to the prison to see Stacey. He admits that he messed up and explains everything. Stacey warns Martin to sort Ruby out, or she will kill her.

At the same time, a solicitor orders Jean to reveal who put her in touch with the drug dealer in order to boost her own chances of walking free. Jean announces that she’s ready to reveal who it was.

Tiffany gives Sonia an ultimatum – it’s her or Dotty. Tiffany and Dotty both attend the same boxercise class, leading to a stand-off between them.

Tiffany also notices that a guy at the gym, Ethan, seems keen on Sonia.

Tiffany punches Dotty in the stomach while they’re boxing partners. A fight breaks out between them, forcing Nancy and Sonia to rush in and break it up

Ruby is emotional as she checks the results of a pregnancy test.

Later, Martin confronts Ruby and she finally confesses that she sent Stacey down.

Sonia lands a date with Ethan, but Rocky is unsure about the new man in her life.

Excitement is in the air as Bernie attends a baby scan, but something isn’t right with Rainie as she storms off.