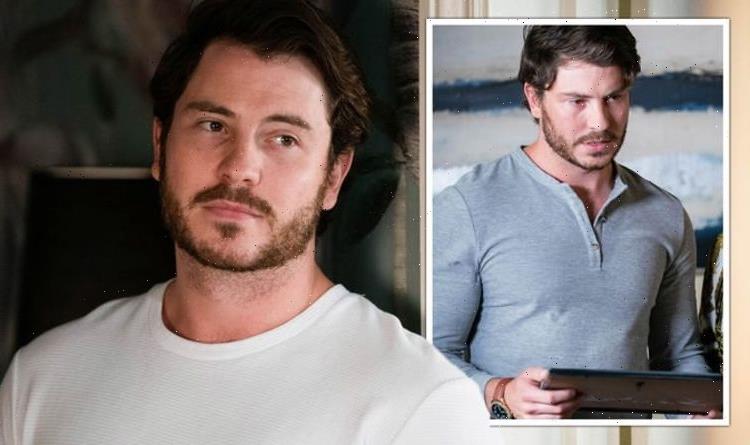 It’s just over a year since Gray Atkins (played by Toby-Alexander Smith) killed his wife Chantelle (Jessica Plummer) and he’s been slowly working on getting close to Whitney Dean (Shona McGarty). Manipulative as ever, the EastEnders lawyer will use the loss of his father to make Whitney feel sorry for him as he tries to wield control over her.

Not only has Gray killed his wife but he has seemingly murdered Tina Carter (Luisa Bradshaw-White) and pushed Kush Kazemi (Davood Ghadami) in front of a train.

He almost got rid of Kheerat Panesar (Jaz Doel) who has been suspicious of Gray for some time when the Mitchells’ house went up in flames.

However, Whitney believes he is a hero for helping Kheerat to safety and has started falling for Gray’s charms again.

In coming episodes, Gray will learn his father has died and appears to be devastated by the news in first-look images.

He turns to Whitney for comfort and of course, she is there with a shoulder for him to lean on.

In spoiler pictures, Whitney can be seen holding Gray’s face as she leans in for a kiss.

It seems Gray is finally getting his wish as he begins to hold control over the market-trader.

However, could moving on with Whitney lead to his downfall as she uncovers the truth about her late friend?

For an fans who are doubtful Gray will not get his comeuppance, EastEnders boss Kate Oates assured viewers his story was always set to be a “longer arc”.

Executive producer Jon Sen added there’s a “fascinating turn of events for the Atkins family” and it could begin with Gray’s devastating news.

Kate said of the storyline: “Even though some of his actions have been extreme, they have always been grounded in the roots of Gray’s character.

“He’s a classic narcissist: everything he does is designed to fit a narrative that absolves him from guilt, and paints him out to be a good guy.”

She added each of Gray’s kills helped to show an element of Gray’s character.

Jon explained the longer storyline has been to help viewers understand who Gray is and how he came to be abusive.

He told Digital Spy: “We’re building to the kind of culmination of the Gray storyline.

“And that takes it’s kind of next chapter, I think, obviously, has been a very long story arc and it’s taken many twists and turns, but we are kind of like you know, going back to the grass roots of the story really pivoting it back to, to its origins, and it’s gonna be fascinating turn of events for the Atkins family.”

Elsewhere in Albert Square there are tough times ahead for Whitney as her sister Tiffany Butcher (Maisie Smith) is set to leave Walford.

EastEnders confirmed actress Maisie would be leaving later this year but details of her exit are being kept under wraps.

Tiffany has been left heartbroken by the news her husband Keegan Baker (Zack Morris) cheated on her while her brother Liam Butcher (Alfie Deegan) has just returned after years away.

Could he play a role own Tiffany’s exit encouraging her to join him in Germany for a new life?

EastEnders continues Monday on BBC One at 8.05pm.