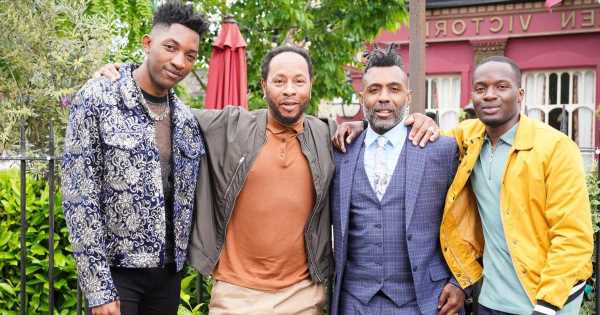 BBC viewers will see some new faces in Albert Square this summer as EastEnders welcomes three new characters to The Baker family.

As Mitch prepares for a busy summer he will soon be shocked when he discovers his estranged brother and two nephews have turned up in Walford.

His character is described as almost always on the verge of causing trouble, and the stark opposite to his little brother. His arrival will immediately cause heads to turn with viewers as writers line up some exciting new storylines for the new faces.

Avery will be joined by his two sons, Felix and Finlay, who will be played by Matthew Morrison (Felix) and Ashley Byam (Finlay).

The youngest of the two brothers, larger than life Felix will throw himself into life in Albert Square with his quick wit and frank honesty.

Older half-brother Finlay has a different biological dad but was raised by Avery soon after birth. Finlay has sailed through life using his cheeky charm but is set to face a wake-up call as he begins life in Walford.

While Mitch dearly loves his nephews, he has a complicated relationship with his brother after not speaking to him for years.

Realising there must be a reason for Avery suddenly coming back into his life, Mitch is Avery is hiding a secret.

On taking on the role as Avery, Omar Lye-Fook, MBE said: “I’ve been watching EastEnders since I was at school so it’s such a surreal experience to now be part of the show.

"I’m having so much fun and it’s an honour to be working alongside this incredible cast.”

Matthew Morrison, who will play Felix, added: “It's an honour to be a part of such a legendary show that I grew up watching. It hasn't quite sunk in yet, and I don't think it ever will.

"I'm having a ball getting to grips with Felix and cannot wait for you all to meet him!”