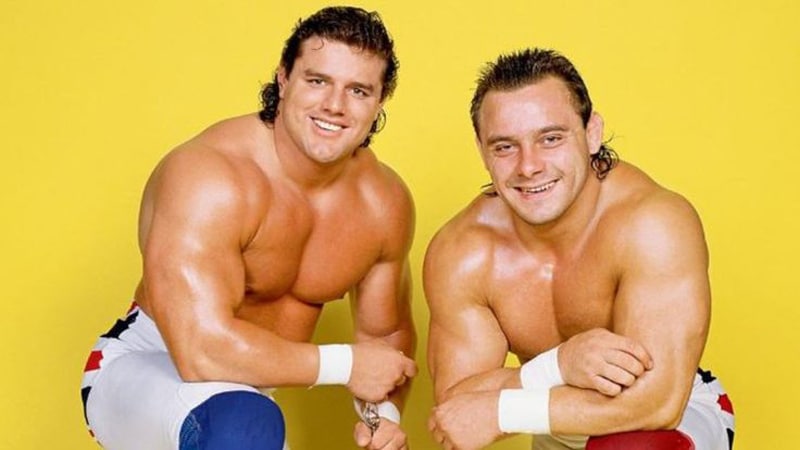 Tom Billington, known to WWE fans as the Dynamite Kid, passed away at the age of 60 after a long battle with various health issues.

In the ’80s, there was not a more popular tag team in the WWE than the British Bulldogs. Dynamite Kid teamed with Davey Boy Smith to form a team that shot to the top of the WWE tag team rankings.

The British Bulldogs held the WWF tag team championship one time, under the management of the legendary Captain Lou Albano.

Tom Billington was born in Golborne of Greater Manchester and hit it big in the ’80s with his cousin Davey Boy Smith.

However, before that, he wrestled in Britain and won a number of titles there before making his way to Canada. It was there that he worked for Stu Hart and became friends with his sons Bruce Hart and Bret Hart, who was a rookie at the time.

From there, he got a chance to wrestle for New Japan Pro Wrestling where he feuded with Tiger Mask in what was considered groundbreaking for the light heavyweight style of wrestling.

Those matches are considered by many to set the standard for the cruiserweight division that would appear two decades later.

Through it all, he continued to compete in Canada and quickly hooked up with Davey Boy Smith as a tag team.

In 1984, Vince McMahon bought out Stampede Wrestling and brought a number of their stars to the WWE, including Bret Hart, Jim Neidhart, Dynamite Kid and Davey Boy Smith.

The WWE created two tag teams from this merger in the Hart Foundation and the British Bulldogs and the two teams feuded with each other at the start of their careers in the WWE.

The British Bulldogs ended up winning the WWF tag team titles at WrestleMania II. However, after they won them, Dynamite Kid suffered a serious leg injury that took him out of action. When he was able to return, they dropped the titles to the Hart Foundation.

That also marked the end of the British Bulldogs as championship contenders and instead became a gimmick team, bringing an actual bulldog named Matilda to the ring with them.

Backstage, Dynamite Kid developed a rough reputation as a stiff worker (meaning he hurt a number of people in matches) and as a bully backstage. An incident with Jacques Rougeau backstage was the final straw and the WWE released him.

The Dynamite Kid went back to Canada and worked both there and in All-Japan Pro Wrestling but his career ended eight years later.

Dynamite Kid has lost a lot of weight and his health was falling fast at the age of 38. One day after his final match in 1996, he suffered a seizure at the airport and was hospitalized.

One year later, he lost the use of his left leg and ended up paralyzed in that leg and was confined to a wheelchair.

Some believe that the use of the diving headbutt caused spinal problems for Dynamite Kid. That was also the move that caused severe brain damage to Chris Benoit, a man who credited Dynamite Kid as the biggest influence in his career.

In 2015, Dynamite Kid suffered a stroke.

Davey Boy Smith Jr., whose father passed away in 2002 at the age of 39, said that he saw Dynamite Kid last June.

“I was really happy and glad I got to see ‘Dynamite’ one last time last June in the UK,” Smith said. “Dynamite was certainly an inspiration to myself and many others and really revolutionized professional wrestling as we now [sic] it today. He flew high, and gave it his all every match.”