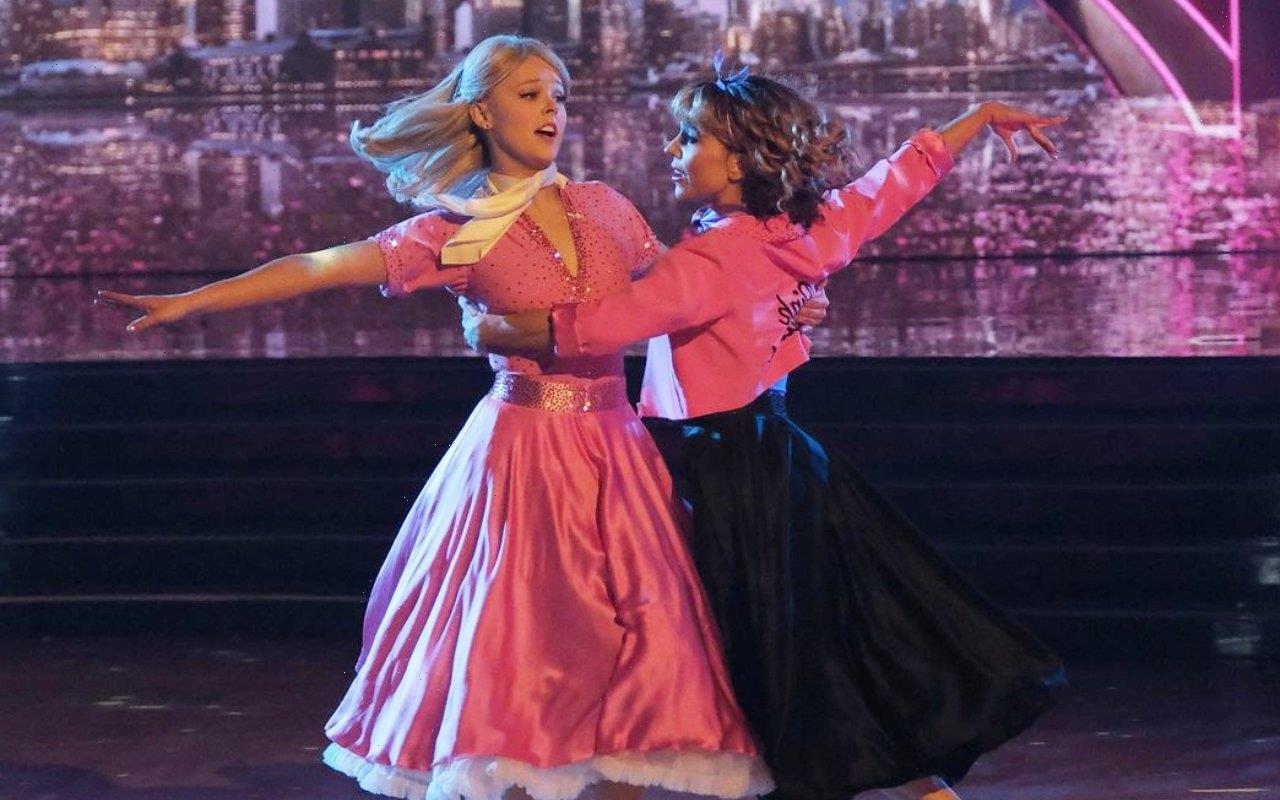 A new episode of the long-running ABC dancing competition show features the 11 celebrities and their pro-dancer partners taking on performances inspired by ‘Grease’ as well as an unexpected elimination.

AceShowbiz -A new episode of “Dancing with the Stars” season 30 saw the celebrity dancers returning to the ballroom in the glitz and the glimmer. Airing on Monday, October 18, the new outing of the long-running ABC dancing competition show featured the 11 celebrity and pro-dancer couples take on performances inspired by “Grease”.

The first pair to hit the ballroom that night were Olivia Jade and her partner Valentin Chmerkovskiy as they danced the Foxtrot to “Summer Nights”. Of their performance, judge Len Goodman said, “I think if Sandy and Danny were to dance a Foxtrot it would look a lot like that. It was full of fun and entertaining. Olivia you are becoming ne heck of a dancer, Val your choreography is just great.” The couple earned 36/40.

Up next was Melora Hardin, who danced the Viennese Waltz to “Look at Me, I’m Sandra Dee” alongside her partner Artem Chigvintsev. Bruno Tonioli raved over the performance as saying, “You got the part, you are hired. You put some bump and grind in there and I liked it, it enhance the character, you did so well.” Tying with Olivia, Melora also got 36/40.

Later, Iman Shumpert and Daniella Karagach danced the Viennese Waltz to “Hopelessly Devoted to You”. While Len complimented them for “a gentleness that I liked so much,” the judge noted, “Your technique isn’t great. You try so hard that I find it hard to criticize you.” The judges gave them 28/40.

The Miz and his pro dancer partner Witney Carson then followed it up with the Jive to “Greased Lightnin’ “. “Go Miz lightning!” Carrie Ann Inaba gushed, adding that she loved his energy. However, she noted that he was ahead of the song most of the way. The pair got 32/40.

Dancing the Viennese Waltz to “Beauty School Dropout” were Amanda Kloots and Alan Bersten. The judges loved their performance as Derek Hough said that she’s “consistently fantastic” and had a “beautiful frame.” Carrie Ann also shared that it had “technique,” “elegance,” “musicality” and “storytelling.” Amanda got almost a perfect score as she was given 39/40.

As for Suni Lee and Sasha Farber, they hit the ballroom to dance the Charleston to “Born to Hand Jive”. Derek noted that he loved the iconic moment with her foot on his chest. Carrie Ann said that the performance was “fantastic,” but she wanted her to be “a little more aggresive” with the movement. The judges gave Suni 36/40.

Jimmie Allen and Emma Slater then offered an emotional performance of the Foxtrot to “Sandy”. Len said that Jimmie had “flair” and “enthusiasm,” but he needed to work on his technique and posture. As for Derek, he was satisfied with the perfomance as he called it “the complete package.” Jimmie got 34/40.

Dancing the Rumba to “There Are Worse Things I Could Do” were Kenya Moore and her pro partner Brandon Armstrong. Carrie Ann loved it, calling the performance “delicious” and “sensuous.” Len also raved that it had “chemistry,” “romance,” “control” and it was “spot-on.” She was given 36/40.

JoJo Siwa and Jenna Johnson later followed it up with the Foxtrot to “Look at Me, I’m Sandra Dee” reprise. That was totally amazing as Len gave the pair a standing applause at the end of their performance. “You affected my brain with the quality of the technique, and you affected my heart,” he said. Bruno claimed that he was “shivering,” while Carrie Ann called it “perfection.” The judges gave the pair a perfect score of 40.

Mel C (Melanie C) and Gleb Savchenko opted for the Quickstep to “You’re the One That I Want”. Derek said that she was “phenomenal” despite a “teeny little” mistake. Carrie Ann noticed that she was nervous before she managed to start having fun, while Len thought it was Mel C’s best dance so far. The singer got 36/40.

Rounding out the night were Cody Rigsby and Cheryl Burke as they danced the Quickstep to “We Go Together”. Carrie Ann was impressed by that performance considering they just recovered from COVID-19, but she told them to be closer in hold. Len liked Cody’s energy, while Derek said he saw improvement in Cody. Cody got 32/40.

It was time to reveal the results and it was announced that Mel C & Gleb and Olivia & Val were at the bottom two. Derek voted for Olivia, Carrie Ann opted to save Mel C. Bruno also voted for Mel C. Len got to make the deciding vote and he voted Olivia. Mel C was unfortunately eliminated.