90 Day Fiance star David Toborowsky revealed that his daughter Ashley has been diagnosed with the coronavirus.

Ashley popped up in Season 5 of 90 Day Fiance when she threatened to punch her father in the mouth and threw a glass of water on his face. At the time, she had not seen her father for over two years and they were estranged, but it appears that their relationship is much better.

Annie Suwan and David Tobrowsky seemed like one of the couples that were doomed to fail. After appearing on the cast of 90 Day Fiance: Happily Ever After? Season 3, things have been looking up for the couple.

David and Annie announced their plan to open a Thai restaurant. Furthermore, they have a spin-off series called Spice It Up With David and Annie where the couple cooks up some of their favorite dishes.

Annie and David have become a fan-favorite couple with their appearances on 90 Day Fiancé: Self-Quarantined and Pillow Talk.

David revealed that his daughter has been diagnosed with coronavirus. In a statement, he described her symptoms and current state.

“Please say a prayer for my daughter Ashley,” David wrote to his 460,000 Instagram followers. “She tested positive for Covid 19 4 days ago. So far she has had a lot of coughing, sore, lack of smell, and taste. She is at her home in Louisville at this time.”

David and his once estranged daughter appear to be getting along. He revealed that she visited the 90 Day Fiance couple last February along with heart-warming photos.

“We love you Ashley and Annie and I are sending our prayers of healing,” David said in the statement. 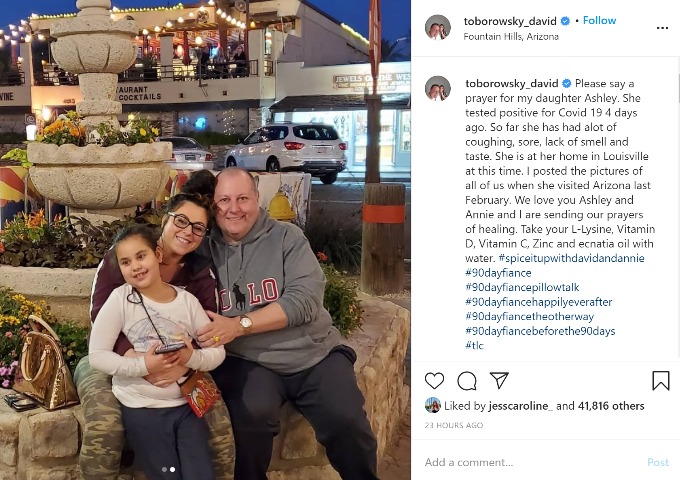 David got support from 90 Day Fiance stars Jess Caroline from Season 5 of Happily Ever After, Kenneth Niedermeier from Season 2 of The Other Way, and Cortney, Caesar Mack, and Benjamin Taylor from Before the 90 Days.

David and Annie have come a long way

When 90 Day Fiance fans were introduced to David, he had a problem with alcohol, a strained relationship with his children, and he was living off his friend Chris with no savings or home, despite having a Master’s degree.

However, they continued to work on their relationship and David learned from his mistakes. The couple travels the world together and he keeps in communication with his daughter Ashley and his other children. With their financial issues behind them, fans should keep an eye out for their restaurant.