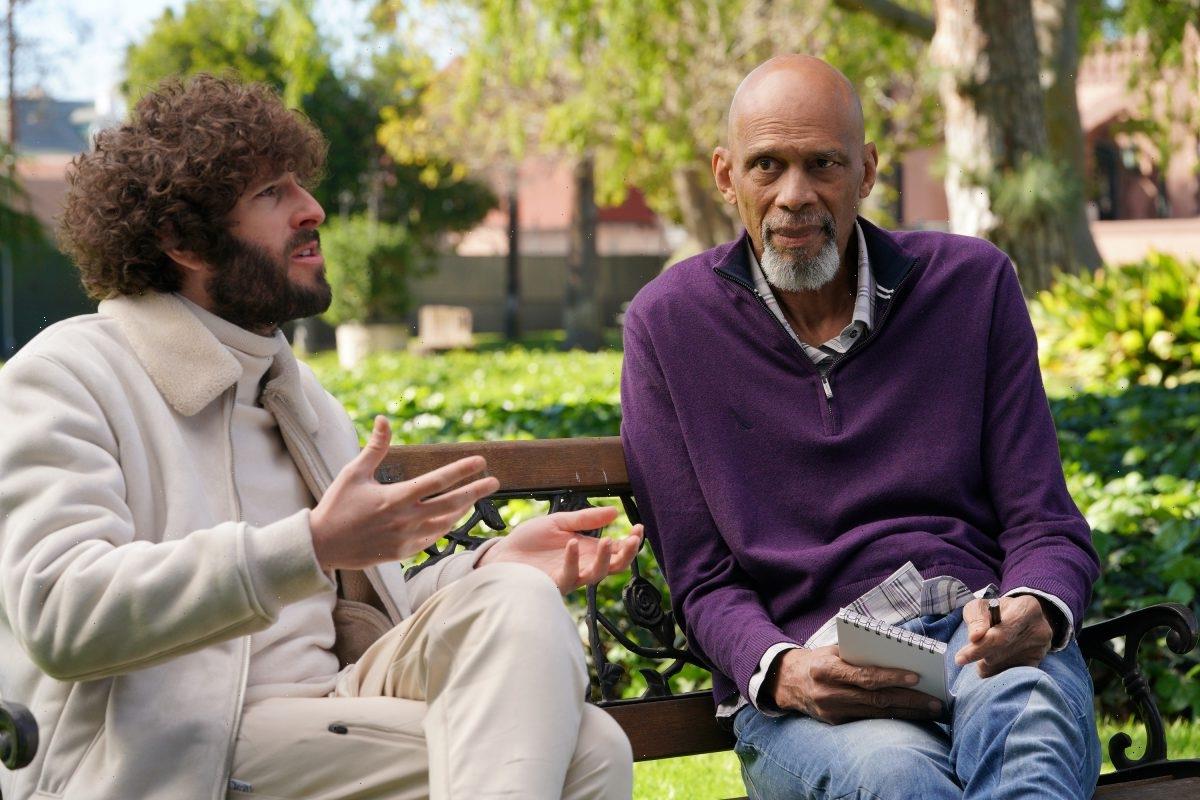 Lil Dicky — also known as Dave Burd — is a rapper and star of the FX series Dave. An autobiographical comedy, Dave tells the story of Lil Dicky’s early career. In the season 2 episode “Kareem Abdul-Jabbar,” the world-renowned basketball player guest stars. Ultimately, the NBA legend helps Dave start to chip away with his impending narcissism.

Throughout season 1, Dave tries to balance his desire to become one of the best rappers of all time with his interpersonal relationships. Eventually, Dave learns he has to choose between one or the other.

In season 2, Burd and co-creator Jeff Schaffer want to continue on that trajectory of self-discovery and focus on Dave’s motivations for his selfishness. “What we really wanted to explore in this season was pressure and success, and how a little bit of success breeds a lot of pressure,” Schaffer told The Hollywood Reporter in an interview.

“This moment where Dave is feeling the utmost pressure he’s ever felt in his life because he’s expected to create a full album, and all of his people aren’t just there for him,” Schaffer adds. Ironically, season 2 guest star Abdul-Jabbar helps Dave on the path to figuring that out.

Abdul-Jabbar might be the all-time points leader of the NBA thanks to his deadly skyhooks, but he’s also a friend of Lil Dicky. “Great time working with [Lil Dicky] on [Dave],” the living legend writes on Instagram to promote the episode.

In the episode, Abdul-Jabbar reaches out to Mike (Andrew Santino) about meeting up to discuss Lil Dicky’s song. As a fan, Dave is excited. But when Abdul-Jabbar starts to dig into Dave for appropriating Black culture and the rap genre, he is full of regret.

“I’m being scrutinized by a 7-foot-3 man-made of silk,” Dave says. Ultimately, Dave’s conversations with Abdul-Jabbar are telling. The two have a meaningful conversation about Dave’s increasingly selfish behavior.

“Obviously, that’s not what life is about,” Dave explains of his desire to be famous. “But if I don’t give it my all, I’ll never be that. The way that I can do the most good is to become the biggest artist, so I have to be selfish.”

“That’s the greatest excuse for being narcissistic,” Kareem concludes, forcing Dave to look even deeper within.

There’s no shortage in Burd’s life when it comes to friends in high places in the entertainment industry. Both Kevin Hart and Scooter Braun have producer credits on Dave. But having Kareem guest star on the show was a big deal for the “Pillow Talking” rapper.

“Him even being like ‘Dave, where’s the bathroom?’ — just saying the name ‘Dave’ to me every time I was like physically affected and moved and touched,” Burd explains in Schaffer’s interview with The Hollywood Reporter. “I was just so in love with him, he was the sweetest man.”

Working on the show together wasn’t the only gift the NBA all star gave Burd. “At the end he actually gave me [a] signed basketball and a championship ring type of thing,” he added.

Despite what happens to Kareem in the episode, it seems he and Burd are lifelong friends. Tune in to Dave on FXX or Hulu to find out what happens.