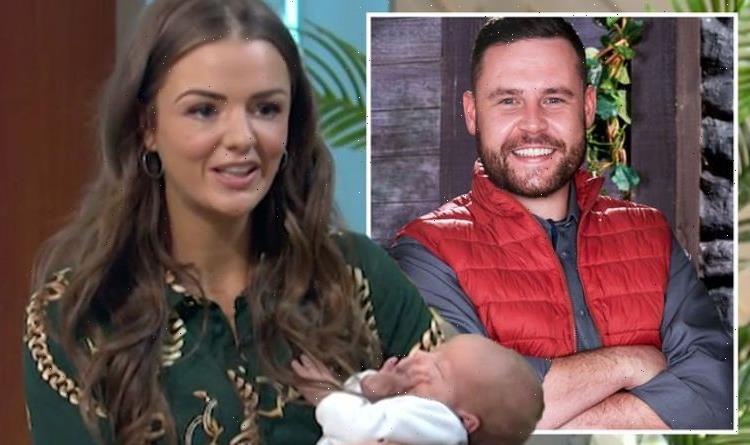 I’m a Celeb: Danny and Arlene may clash over tidiness says fiancé

Danny Miller’s fiancée, Steph Jones appeared on Lorraine to speak exclusively about family life with the soap star. In the first episode of I’m A Celebrity…Get Me Out Of Here!, ITV viewers saw Danny struggle to acclimatise with his new surroundings, claiming to have been sick “three times” during the initial helicopter ride. However, it’s another behaviour trait of his that Steph thinks could irk none other than former Strictly judge Arlene Phillips.

Danny welcomed his first child Albert with partner Steph back in October and his fiancée brought their four-week-old son onto Lorraine whilst she discussed her thoughts on this year’s line-up.

Steph revealed an annoying habit the new father has which could cause arguments with one particular celebrity.

Learning more about the Aaron Dingle actor, host Lorraine found out what may cause a stir in the castle.

She asked: “Has he got anything you think that campmates will be annoyed by? Has he got any sort of thing that drives you crazy?”

“His bad habits in terms of not cleaning up,” Steph replied as she admitted the actor was “quite untidy”.

In previous years, campsite cleanliness has been the catalyst for many celebrity fallouts.

And another clash could soon emerge as Lorraine mentioned how Arlene is quite the fan of cleanliness.

Lorraine responded: “Arlene is a clean freak, isn’t she? Oh dear, that could cause a few problems.”

In agreement with the hosts, Steph chuckled as she replied: “Yeah.”

Dame Aileen Phillips at age 78 is the oldest ever contestant to enter the competition.

The ex-Strictly Come Dancing judge said ahead of her stint on I’m A Celebrity: “I can’t live with the soil.

“I’m completely OCD about everything in my life being organised, clean and tidy.”

Lorraine’s resident entertainment expert Ria Hebden responded to the claim revealing the choreographer and soap actor may not see eye-to-eye.

She said: “He might rub Arlene up the wrong way then because she is so clean, isn’t she?”

Danny’s acting debut on the ITV soap began back in 2003 but partner Steph spoke openly with Lorraine about how the soap star’s appearance on the show is important for their family.

She confessed: “This is the biggest opportunity of his career, he’s been in Emmerdale for 13 years and he wanted to open the door, maybe to a different career path.”

She continued: “He’s got longer time off with Albert next year rather than working Monday to Friday 7am to 7pm.”

I’m A Celebrity…Get Me Out Of Here! airs on ITV daily at 9pm.