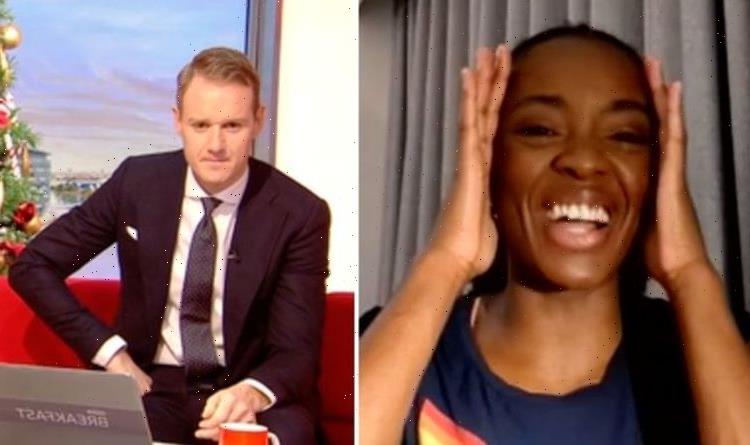 Strictly: Aj Odudu says "nothing will ever top" meeting Kai

Dan and partner Nadiya Bychkova were eliminated during the quarter-final after losing to AJ Odudu and Kai Widdrington in the dance-off. Nevertheless, their friendship was left untarnished after the BBC presenter delightfully welcomed his former Strictly co-star on BBC Breakfast on Monday. Both AJ and her dance partner Kai were interviewed via video call before their dance rehearsal. The BBC anchor exposed what “occasionally” happened behind the scenes with AJ before the finalist exclaimed: “Did you even just say that?”

Dan told viewers about a secret ritual he shared with the 33-year-old presenter during their time in the hotel.

The newsreader then pointed out: “We’ve talked about nerves, haven’t we?

“I know you’ve struggled with them in the competition,” he added.

The former competitor asked: “How are you feeling now knowing that there’s one Saturday left [and] three dances, [are] separating you from potentially getting your hands on that Glitterball [Trophy]?”

AJ placed her hands to her face and replied: “Oh, my gosh!”

In jest, the star asked: “Did you even just say that?”

The presenter from Blackburn joked with the host: “You’re stressing me out, Dan.” but soon followed with: “I miss you!”

The Strictly Come Dancing finalist continued: “You need to get back to the hotel, we need to have a ‘chippy’ [dinner] together.”

Unbeknownst to BBC audiences, AJ announced she is regularly “filled with nerves and butterflies” before her performance.

She added: “Always the same but, again, I’m really really excited and lucky to be in the final.”

The TV presenter did claim that although she struggles with her nerves, she’s still ecstatic to be in the final of the competition.

She stated: “Honestly, I’m so happy I could burst.”

Over the weekend, AJ and her dance partner Kai did spark romance rumours while performing a very sultry Rumba.

Speculation began to circulate after the pair shared a near-kiss on the dancefloor.

The dance duo performed Show Me Heaven by Maria McKee before judge Motsi Mabuse said the couple had “extraordinary chemistry”.

During their post-dance interview, AJ praised her partner for being “patient and devoted” throughout the dance contest.

Alongside AJ, the two other celebrities performing in the finale are soap actor Rose Ayling-Ellis and celebrity baker John Whaite.

Viewers at home will have a tough decision to make next week as the final dances are performed, and it’s now taken out of the judges’ hands.