A good friend of the late Dame Deborah James has run the London Marathon dressed as the poo emoji in her honour.

One of her pals was interviewed live on BBC One where he revealed he had promised the late campaigner he would dress up in the costume for the 26.2mile race to raise further awareness of the disease.

‘My great friend Dame Deborah James, she died recently of bowel cancer,’ the man, who has yet to be identified, told the channel.

‘It was her birthday a year ago yesterday and she made me promise that I would run this year as a poo emoji and here I am and I’m regretting it.’

The BBC reporter responded: ‘I’m sure she’s looking down at you thinking he absolutely stuck to his word.’ 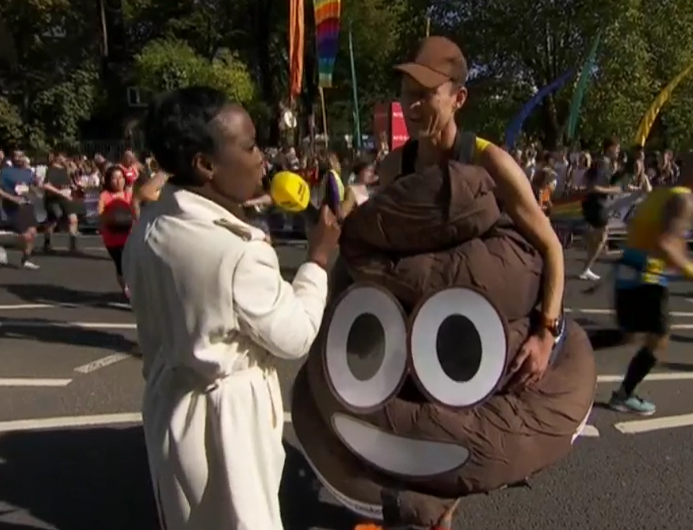 She continued: ‘And for you to be able to complete this in her name, in her honour, how much does that mean to you?’

Choking up, Dame Deborah’s friend replied: ‘It’s really important. You got me a bit weak there.

‘Her husband’s a great friend of mine too, her two children… it’s really important, yeah.’

Dame Deborah influenced millions of lives as she worked to raise awareness of bowel cancer symptoms and was awarded a Dameship for her services by Prince William earlier this year.

Many have pointed squarely to her as the reason their own bowel cancer was detected early, as they learned to recognise early symptoms thanks to her campaigning.

On Saturday, Dame Deborah James’ mum Heather marked what should have been her 41st birthday with a loving post of remembrance.

Taking to Instagram, Heather shared a precious snap of Dame Deborah and wrote: ‘Happy birthday to our darling daughter.

‘How we wish you were still with us but so proud of all you achieved and the legacy that you have left.

‘You will forever live in our hearts.’

In a recent interview with the BBC, Heather reflected on one of her final conversations with her daughter, admitting ‘the hardest thing was knowing she was going to die’.

‘My heartache was knowing as a mother I couldn’t do anything about that and I think that was the hardest for me to cope with,’ she said.

‘We had some good times. I can remember lying in bed, probably just about a week or so before she died and she was quite poorly that night and she went, “I do love you” and I went, “I love you”.

‘She went “I have no regrets” and I went “That’s brilliant”, how many people could say that?’