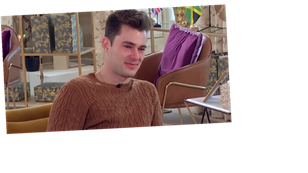 Celebs Go Dating star Curtis Pritchard got emotional as he opened up about his Love Island relationships during Friday's episode.

The professional dancer is currently on the search for Mrs Right and as summoned for a chat with love gurus Anna Williamson and Paul C Brunson during the latest episode of the E4 dating show.

Anna and Paul quizzed Curtis on his dating history which led the reality star to recall his relationships with fellow Love Island co-stars Amy Hart and Maura Higgins.

After spending a few weeks joint at the hip and becoming half-boyfriend and half-girlfriend on the show, Curtis realised that he wasn't quite feeling the relationship as much as she was while staying at Casa Amor.

Upon his return, he broke things off with Amy, before later developing feelings for fellow Islander Maura – something that prompted Amy to leave the competition for good.

Speaking about Amy's decision to leave the famous villa, Curtis told the Celebs Go Dating experts: "I wanted to find love, went on Love Island and dived in with the first person I had connection with.

"What is happened with me and Amy obviously split up and everything happened. She left the show."

"It was horrible. It was heartbreaking. I was proper was genuinely upset. I felt like I destroyed somebody.

Anna asked: "If you could have done something different in that scenario, wha would you have done.

"Maybe form the start I wouldn't have thrown by eggs into one basket," Curtis replied.

"I would have spoken to more people. That's why I'm unsure about this whole situation right now."

Curtis went on to reveal why his relationship with ex-girlfriend and Irish mode Maura came to an end.

"She wasn't my usual type. She wasn't, but she's red hot, fiery, attractive," he explained.

"Behind closed doors I am quote a fiery character and in my dancing and in the bedroom and stuff.

"Yeah then with Maura things just sort of started to go downhill a little bit really."

His eyes started to well up as he said: "She recently got in a relationship with her 'best friend' who came into Love Island and stated that he fancied Maura."

Anna replied: We can see how hurt you've been."

Curtis replied: "It's life isn't it."

AJ Pritchard's brother wasn't the only one feeling emotional on Friday as fellow celebrity contestant Tom Zanetti broke down in tears as he talked about the death of his ex-girlfriend.

Tragedy struck Tom in 2010 when his girlfriend Elizabeth Rose Pickavance, who he was living with at the time, died in a devastating car accident.

She was immediately rushed to the hospital, where she died at the age of 20.

Celebs Go Dating continues on E4 on Monday at 9pm