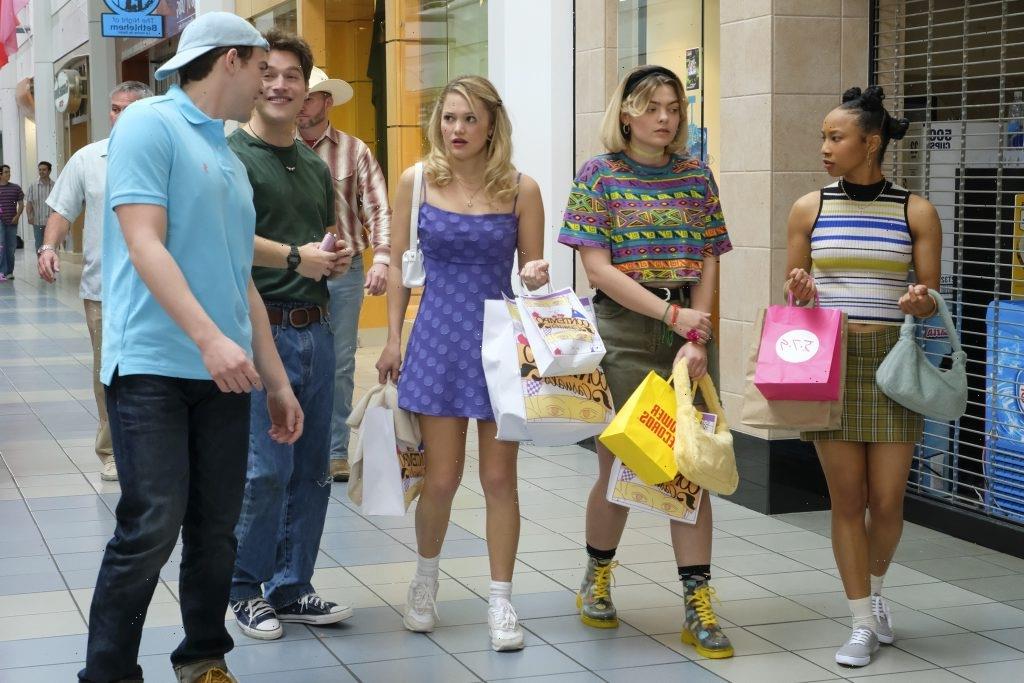 In the Freeform Cruel Summer Episode 7 recap, the perspective switched from Jeanette Turner (Chiara Aurelia) to Kate Wallis (Olivia Holt). Viewers watched flashbacks from August 29, 1993, 1994, and 1995 in “Happy Birthday, Kate Wallis.” Kate struggled with a family secret in 1993. Meanwhile, Joy Wallis (Andrea Anders) tried to talk her daughter into going on The Marsha Bailey Show in 1994. In 1995, Mallory Higgins (Harley Quinn Smith) had a birthday surprise for Kate.

In 1993, Kate Wallis went to the mall with her two best friends, Tennille Peterson (Shelby Surdam) and Renee Talbot (Aaliyah Muhammad). She also met up with her boyfriend,  Jamie (Froy Gutierrez) for her birthday. While the couple ate at the food court, he gave her a promise ring. However, Kate didn’t seem very excited about it.

Later, Jamie and Ben (Nathaniel Ashton) got drunk at the mall and Jamie spilled alcohol on Kate’s purple dress. She tried to take him home, but Jamie peed in Martin Harris’ yard. So, the assistant principal took her home and encouraged her to share her family secret.

When she came home her mother yelled at her for coming home late and drinking. Kate told her stepfather that she saw Joy kissing Scott. However, Joy screamed at Kate and slapped her, and Rod didn’t stand up to defend her. As Kate packed her bags to run away, her mother screamed at her. Viewers found out that Kate willingly went to Martin Harris’ house when she ran away.

In 1994, Kate’s mother tried to talk her into appearing on The Marsha Bailey show and Kate invited Mallory over to her house for the first time. Mallory got Kate high and then they devoured snacks together.

Kate, Mallory, and Kate’s sister, Ashley Wallis (Ashlei Sharpe Chestnut), rented a classic movie at the video store. However, while the girls picked out a movie, Vince confronted Mallory about hanging out with Kate.

Later while the girls watched the movie, Kate screamed at the woman in the movie to “run faster.” After she calmed down, her mother begged her again to go on The Marsha Bailey Show and complained that Kate was high.

However, her stepfather, Rod Wallis, had a heartfelt talk with Kate that made her feel better.

An unnamed teen from Widow Falls alleged that Martin Harris’ harrassed her. However, Kate became even more upset because the assistant principal told her what happened with the other girl. Kate claimed it wasn’t anything compared to what Martin did to her. She was offended by the teen coming forward.

On her birthday in 1995, Kate thought she found what she wanted to remember about Annabelle. However, it didn’t help.

Kate Wallis came down the stairs with Mallory Higgins. Joy Wallis wanted Kate to come up with more of a defense case for her lawyers. However, Mallory informed Joy that Kate wouldn’t be talking about lawyers, court, or anything legal on her birthday.

Mallory took Kate to the roller skating rink for a birthday fun day, except the girls had the rink all to themselves. Kate told Mallory that she couldn’t have gotten through the last year without her. Since Mallory is the new assistant manager at the rink she has a set of keys. The two friends went through a bin of accessories and set out on the floor together.

Later that evening, back at Kate’s house, Mallory found a piece of printer paper jammed that said, “Liar.” She confronted her mother and found that Joy was the one who “sent” the paper to scare Kate. Kate told her mother that she’s the reason Martin groomed her and she trusted him so easily. She’s sick of being her mother’s puppet.

Meanwhile Jeanette’s brother, Derek, found out that Ashley was the one chatting with Kate. He printed out all of the chat room conversations and gave them to his sister, Jeanette. She found out that Kate went willingly to Martin’s house.

Did Joy know where Kate was?

After watching the Cruel Summer Episode 8 promo, viewers wonder if Joy knew where Kate was. The way she spoke to Martin Harris about involving the police it seemed like she knew that her daughter was with him.