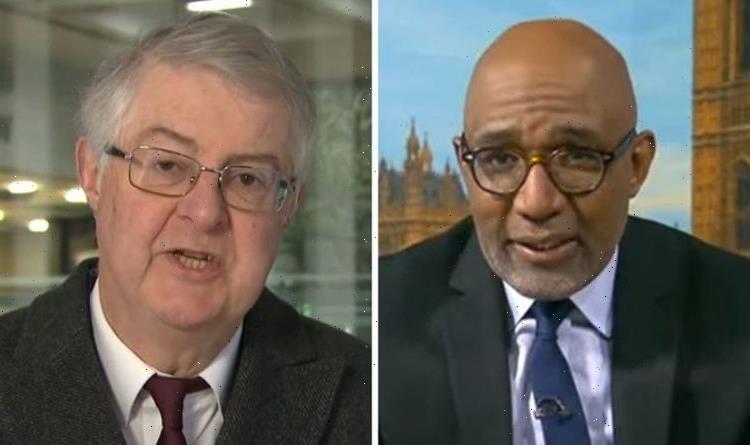 Mark Drakeford hits out at coronavirus restrictions in England

Welsh First Minister Mark Drakeford joined Trevor Phillips on Sunday morning to discuss the current change in rules surrounding isolation from the Omicron variant of the coronavirus. Drakeford launched into an attack on the English Government after he accused them of not following the science and wanted Wales not to be compared to the way Prime Minister Boris Johnson is setting out rules when it comes to the pandemic.

Phillips introduced Drakeford to the show and began: “The nations of the United Kingdom have gone their separate ways when it comes to responding to the threat posed by the Omicron variant.

“Scotland, Ireland and Wales have imposed more stringent restrictions while in England, Boris Johnson says he hoped to ride it out under current plan B rules.

“The Welsh First Minister Mark Drakeford has been withering in his criticism of the approach in England, saying it’s the outlier that doesn’t take the action to protect its own population.

“Do you think that Wales is in some way in danger from England’s policies,” he asked.

Drakeford began: “Well, I’ve agreed with the Prime Minister many times that it is better to have single messages across the United Kingdom.

“That allows us to communicate the seriousness of the position, the measures we ask individual citizens to take in their own lives so when we have different messages across our border that does make it more difficult for us.

“But we faced this in the past, we go on doing as we see it the right thing to protect lives and livelihoods here in Wales.”

Phillips probed: “Wales currently has a higher incidents of COVID despite the restrictions, surely well, first of all, explain why is that the case?”

nhappy about the question Phillips had asked, Drakeford slammed: “I think it is a misleading comparison because there are parts of Wales which are much lower than other parts of Wales.

“There are parts of Wales that are much lower than the hot spots in England, so Wales and the whole of England simply doesn’t get to where the real issue lies.

“We are trying to make sure that we protect Wales from the onslaught of the Omicron variant, which has moved east to west coming into Wales later than I parts of England.

“Our rates are still lower than English hotspots, and we’d like to do our very best to keep it that way.”

Standing his ground, Drakeford explained: “Well, look the point I make it simply I am asked time after time why isn’t Wales doing the same things as England.

“And my answer was to point out that in this debate, it is not Wales that is the outlier, Wales is following the same path of putting protections in place that is being followed by Scotland, Northern Ireland.

“Not just involved governments in the United Kingdom but governments across Europe and across the world.

“A question as to why the UK government has decided not to follow that course of action is for them to answer, not for me.

“I think they have not done what the science would have told them they should do, but that’s decisions for them to answer for, I am responsible for the decisions we make here in Wales.”

The questions surrounding the coronavirus pandemic and the different variants are always ongoing, leaving Governments constantly battling with one another.

Trevor Phillips on Sunday airs Sunday at 9am on Sky News.