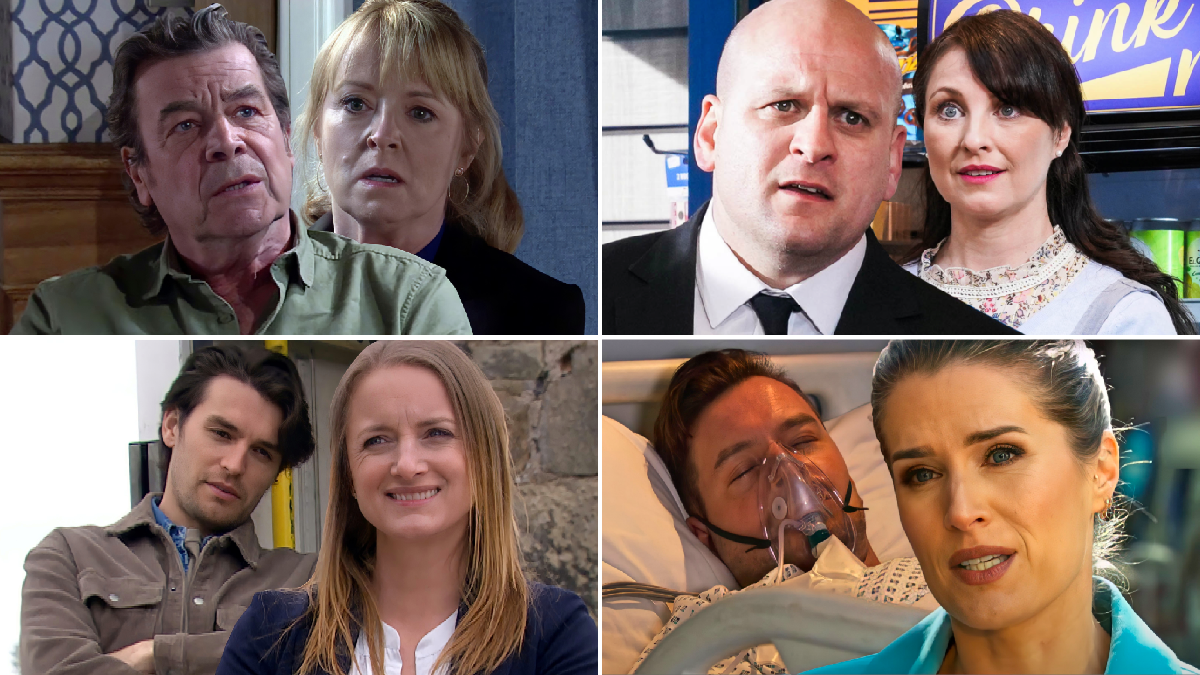 It’s the end of an era in Coronation Street next week, as Johnny Connor (Richard Hawley) reveals he’s intent on selling the Rovers Return.

Jenny Connor (Sally Ann Matthews), of course, will have words for her hubby in the wake of his decision – but the question remains: who will take over the Rovers?

Stuart Highway (Ricky Champ) is left in shock when he discovers grandma Vi (Gwen Taylor) is desperate to set him up with Honey Mitchell (Emma Barton) in EastEnders.

Emmerdale’s Nicola King (Nicola Wheeler) attempts to seduce Mackenzie Boyd (Lawrence Robb), but is all as it seems?

And Darren Osborne (Ashley Taylor Dawson) is left fighting for his life in Hollyoaks after The Loft’s fancy new sign falls onto him.

It’s quite a week over in soap land, that’s for sure!

1. Carla claims that Adam has signed Peter’s death warrant in pulling out of the transplant, but she later receives shocking news, as she learns that a liver has become available. The drawback? Why, she can’t find Peter, of course! Daniel, however, manages to locate him in the bistro. Carla says an emotional goodbye to her beau, as he readies himself for his op.

2. Johnny reveals that he’s putting the pub up for sale, and Jenny is later forced to relay such information to Emma and Sean. Daisy, meanwhile, attempts to see off any potential buyers, and suggests that she and Jenny should raise the funs to buy the pub together.

3. Evelyn continues to milk her fake injury, but Bernie – who is still running errands for her – insists that she’s got a plan. Bernie returns home with Cerberus, and – with the aid of a doggy treat – succeeds in exposing Evelyn’s scam!

4. Aadi pokes fun at Dev’s love life, but Bernie comes to his rescue, claiming that she and Dev are going to brunch together. They ultimately do just that, and as they enjoy themselves, Dev suggests that they go back go No. 7 – to continue to charade!

5. Hope starts to play up, and she takes her mood out on Alina – before running into the road! Alina claims Hope did such a thing to scare her, but will Fiz believe her? Fiz later tells Tyrone he cannot see the kids until a consent order is put in place, but Ty reminds her that Ruby is his daughter – but Fiz later tells him that she’s applying for a parental consent order for Ruby! Evelyn warns Fiz that there are no winners in a custody battle.

6. Billy and Roy ask if Nina would speak to Summer, who is struggling but Nina points out the extent of her own loss, leaving Summer feeling awful. Nina later steals a bottle of vodka from Dev’s, and suggests a drink to Asha and Summer. However, she cuts herself – but refuses help! In the ginnel, she knocks back the alcohol to blot out her grief.

7. Mary tears a strip of Bernie, and accuses her of taking advantage of Dev. However, she later overhears Dev laughing with Steve, as he claims he only copped off with Bernie because she was drunk, leaving her troubled.

8. In the wake of Ben asking him to quit his job, Callum tell him he’ll think about it. Having investigated Kat’s mugging, the policeman – while out with colleague Fitzy – spots the attacker, and they give chase. Fitzy is stabbed, and gives Callum the ring he was planning on proposing with. It’s touch and go as the paramedics arrive, and Callum can’t help but blame himself. Ben, having no idea about what’s transpired, suggests they don’t talk about work, which leaves Callum feeling lonely.

9. Linda is concerned that she won’t be able to hide her baby bump much longer, and claims Max needs to know. She does some digging, quizzing Denise on information regarding his whereabouts. Jack, meanwhile, has taken Abi to see Max in Paris.

10. Phil isn’t pleased when he sees two coppers at Kat’s, but he jumps to the wrong conclusion, as he assumes the worst about Callum. Kat, however, informs him she was mugged, and he feels terrible. He later has a proposition for her – revealing that the launderette is up for lease, and he wants them to buy it and run it together.

11. Vi is getting under Rainie’s feet. Stuart, meanwhile, wants to tell her about their surrogacy plans, but Rainie puts her foot down! Vi meddles, and Stu realises he was trying to set him up with Honey, forcing him to admit he and Rainie are planning on having a baby. Vi soon changes her tune, and reveals she wants to get to know Rainie better.

12. Ruby asks Lola for some advice on how to handle Lily, and she soon does as Lola instructs, striking a deal with her stepdaughter! Terms are agreed, as Lily agrees to spend one night a week at Jean’s, leaving Jean impressed.

13. Lola is distracted as Isaac continues to snap at her, and she notices changes in him. Ruby, meanwhile, invites both she and Isaac round, but Isaac’s erratic gesture leaves Lola worried. Ruby is shocked when Isaac asks after Johnny, and Lola explains Johnny was no angel. Issac later digs for more information on Paul.

14. Terry catches sight of Kathy, and he evidently takes quite the shine to her. He asks her to go for a drink, but Kathy ignores his request and takes the day off work!

15. Jamie finds Kim’s hidden camera, forcing her to reveal that someone has been drugging her. Jamie, however, while shocked, he is offended that Kim suspected him of such a thing. Later, he attempts to convince his mum to come away with him for a while.

16. Nicola confides in Bernice about her marriage problems, and Mackenzie is on hand to offer his services – revealing that he’ll always be an option for her. Nicola soon gets glammed up, and appears to make a move on Mack at the scrapyard! Are Mack’s dreams really coming true?

17. Jimmy goes to Mandy for support, after realising that he and Nicola are more estranged than ever. However, he’s filled with regret when he reveals to Mandy that his feelings run deeper than friendship. Mandy urges him to fight for his marriage, but when he returns home and witnesses a row between Juliette and Nicola, he takes Juliette’s side, before telling his wife that he wants to move out.

18. Meena attempts to ruin Charles’ planned trip away with Andrea, as she sows doubts in her mind.

19. Andrea leaves Princess the dog secretly tied up in the shade, but a mystery someone lures the dog into the parked car and slams it shut. The sun beams down on the trapped dog, who desperately tries to escape. Will Princess be rescued before it’s too late?

20. Bernice secures a job back at the salon.

21. Grace could not be more excited about the re-opening of The Loft. In fact, you might even say she’s over the moon, as Felix puts up the new sign. Fergus, however, plans on sabotaging the big the day. He’s aware that Grace hasn’t got insurance, and therefore he tells Timmy to keep a watchful eye out, while he loosens the bolts on the night-club’s new sign!

22. Darren ultimately comes to a decision regarding whether he wants to be with Nancy or Mandy, and thus he instructs Mandy to meet him at The Loft – which is due to re-open on the day in question. However, before he can reveal his choice between the two women in his life, the nightclub’s fancy new sign comes crashing down on him! Darren is ultimately left fighting for his life, as he’s taken to hospital, where we learn that he is in a coma.

23. Upon learning of the incident, Luke attempts to explain what happened to Cindy and Sue. However, he forgets his best mate’s name. It’s evident that his dementia is getting worse, and therefore Cindy makes a shocking decision.

24. Peri notices a text from Donna Marie on Juliet’s phone. Donna Marie begs Peri for assistance, as she’s hoping to prove to Juliet that she’s a changed woman, and claims that she’s going through rehab. However, she seemingly slips back into her usual selfish ways!

25. Summer is talking wedding prep with Brody, and when he leaves, she organises a prison visit with Buster Smith.