Last night, viewers saw Tracy tamper with Michelle Connor’s car at the garage in a desperate bid to get Abi (Sally Carman) into trouble. Tracy’s sneaky move came as she wrongly suspected that her partner Steve McDonald had slept with Abi ahead of their wedding.

Later this week, Tracy’s petty behaviour has disastrous consequences as Michelle’s vehicle suddenly stops when she, Ryan and Ali are being chased by gangster Ronan Truman in the road.

The drama that follows leads to a death and the police investigation later leads back to the garage, as DS Mackinnon questions why Michelle’s car failed at the crucial moment. 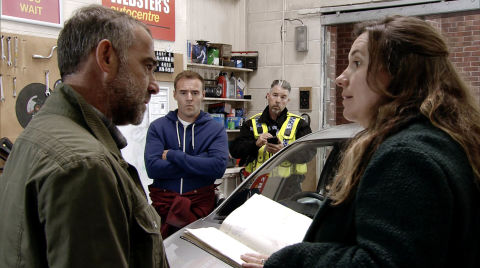 It’s now been revealed that Abi will get the blame for the incident, as the police wrongly suspect that she secretly teamed up with Ronan and tampered with Michelle’s car in exchange for drugs.

Tracy knows this isn’t true, and the Steve misunderstanding has been cleared up too, but she still fails to speak up as she doesn’t want to get herself into trouble.

In the aftermath, a despairing Abi falls off the wagon once again – turning to alcohol as she fears she’s lost her final chance of regaining custody of her young children Charlie and Lexi.

Kate Ford, who plays Tracy, told TV Times: “Tracy’s instinct when she finds out about the crash is to cover her own back. But in doing so, she throws Abi to the wolves.”