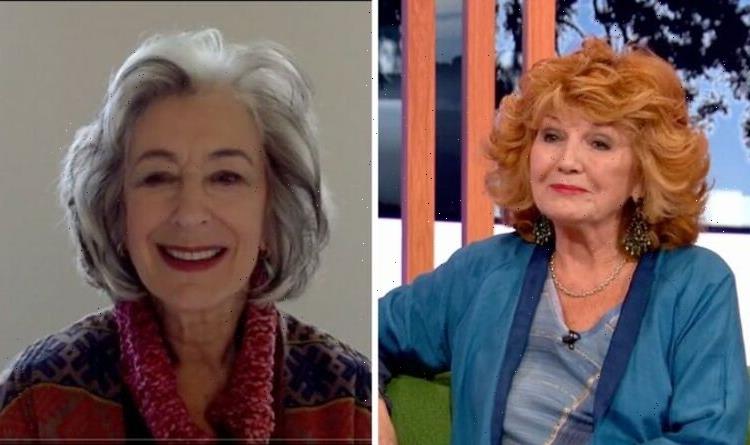 Corrie's Maureen Lipman opens up on living with Rula Lenska

Coronation Street’s Maureen Lipman and Rula Lenska have been friends for years and even shared a flat in Manchester in the 1970s. Rula joined The One Show hosts Alex Jones and Jermaine Jenas in the studio while Maureen dialled in virtually. Reminiscing about the friendship, Maureen thought it was time viewers learnt the “truth” about her co-star’s lavish lifestyle.

The pair were on the show to talk about their upcoming appearance on ITV’s DNA Journey.

Before they got to talking about their ancestors, the two joked about their not so distant past.

Co-host Alex wanted more details and cheered Maureen on, saying: “Come on, Mauren, you tell us, what was Rula like to live with, go.”

Looking back, Maureen added: “Because I came to Manchester with a lemon squeezer, that’s it, and some shoes, and Rula, was in her flat with gauze that covered the lampshades, rugs, pillows that were stuffed with lavender, she brought curtains, everything.”

Maureen described: “We had to move her into the flat with a porter’s trolly.

“In a blizzard, in Manchester, so yeah.

“She loves to cook, and I am just happy to put my feet up and eat nuts.”

Laughing, presenter Alex replied: “You sound like yin and yang to each other.

Rula chimed in: “The odd couple”.

DON’T MISS…
Which The Last Kingdom characters are based on real people? [LATEST]
‘What a fix!’ Starstruck viewers ‘livid’ over final result of ITV show [LATEST]
Derry Girls writer claims Brexiteers ‘didn’t know what they were voting for‘ [LATEST]

@mrscarter22 like the show’s entire line-up and tweeted: “Brilliant tonight! Our @LucyABeaumont rom ‘ull is on #TheOneShow!

However, viewer @cb_038 was not a fan: “A couple of posh actors taking part on DNA Journey.. shocker! #TheOneShow.”

The newest season of DNA Journey kicked off on April 5, with a special focus on The Chase’s Anne “The Governess” Hegerty and  Shaun “The Dark Destroyer” ‘s past.

Rula and Maureen will appear in an upcoming episode with the pair deep diving into their family trees and ancestral timeline.