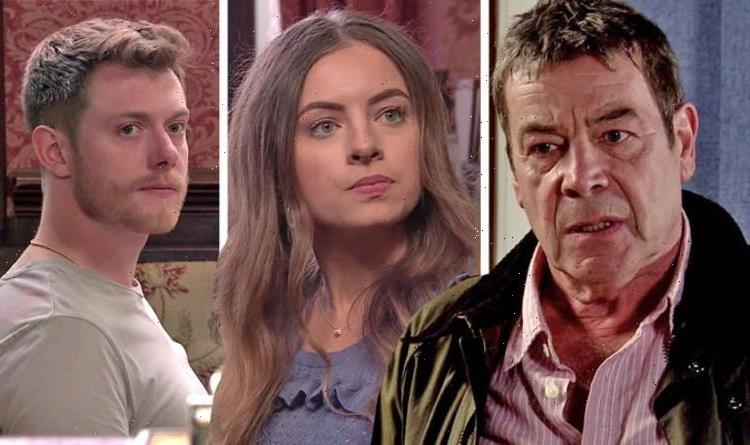 Coronation Street’s Johnny Connor (played by Richard Hawley) grew suspicious of Daisy Midgley (Charlotte Jordan) during Friday’s hour-long episode. He was enjoying a drink at the Rovers Return bar when he noticed Jenny Connor’s (Sally Ann Matthews) stepdaughter flirting with Daniel Osbourne (Rob Mallard) in one of the booths. Confused as to why she was entertaining the father of one instead of being at her boyfriend’s DJ gig, he questions Jenny about Daisy’s intentions. Will Johnny be the one to rumble Daisy’s plan to rob Daniel of his money?

Ryan Connor (Ryan Prescott) told Daisy: “We can still have a great time, the line-up’s amazing and there’s load of stuff we can do nearby. Anyway, it’s about you and me getting away together, isn’t it?”

She agreed and he continued: “I’m off to my gig in a minute, are you going to come and help me set up?”

But viewers watched as Daisy noticed Daniel walking into the pub and she replied to Ryan: “They have not requested my services just yours so I will not grace the with my presence.”

Daisy then struck up a conversation with Daniel about the festival and the children’s version, and the conversation soon turned to Daniel having a child.

After some time, Daniel invited Daisy to join him for a drink and Johnny raised his suspicions with Sean Tully (Antony Cotton).

“Don’t make it obvious, but look over there,” Johnny said. “Bit fishy isn’t it?”

The barman replied: “Well, it’s funny you should say that, she apparently has gone into business with Ryan. He’s at a gig tonight and she’s sat there flirting with Danny boy.

“Apparently Ryan did ask her if she wanted to go but she wanted to stay here and work. Next news, they’re sat with each other talking drivel.”

Daisy and Daniel were discussing their favourite modern artists and music bands and in a later scene, Johnny quizzed Jenny on the two spending time together.

“Isn’t she supposed to be working?” Johnny asked and Jenny remarked: “Well, we’re not exactly rushed off our feet.”

“There’s still plenty of other jobs to do. When was the last time you saw her with a mop in her hand?” He wondered and his partner hit back: “Around about the same time I saw you with one! Back end of never. You do remember you don’t work here anymore.”

“Do she look like she’s flirting to you?” Johnny added and the landlady said: “Yes, but she always looks like that.”

“When she’s talking to me she doesn’t – which obviously I’m relieved about,” He muttered. “I just think it’s a bit off she’s showing so much attention to another bloke and she’s only just got with Ryan?”

But Jenny was sure Daisy was “just being friendly” with Daniel.

After considering Johnny’s comments, Jenny stopped Daisy in the back room of the pub and questioned what she was doing with Daniel.

Daisy said he had offered to buy her a drink and it had to be a bottle of Chardonnay but Jenny was confused as to why she was spending her evening with him instead of her boyfriend.

“It’s a drink with a friend,” Daisy argued but Jenny said: “Right, so this isn’t payback because Ryan dared to speak to his ex yesterday?”

“If I wanted revenge I would be in bed with him by now,” the younger woman smirked and Corrie fans heard Jenny remark: “The night is young.

“Whatever it is, you’re playing with fire,” she told Daisy. “You’ve only just got with Ryan and now you’re making eyes at Daniel Osbourne. That’s what people might think?”

“What people?” Daisy asked. “You mean Johnny – I saw him giving us the evil eyes and you can tell him to get a life. He was judging me like he always does, I don’t care what Johnny thinks because this is all perfectly innocent.”

In the next scene, Daisy quizzed Daniel on his relationship status and he explained: “I just haven’t met the right one since Sinead.”

“What about you? You’re seeing Ryan aren’t you?” Daniel asked and Daisy revealed it was still early days between her and Ryan.

But their conversation was short-lived as Ryan returned from his gig early leaving Daniel a little bit jealous.

Should Johnny question Daisy’s intentions with Daniel, will Daisy’s nasty side rear it’s ugly head as she threatens the older man to stay out of her business unless he wants some of his own dirty laundry aired?

Next week, Daisy finds out Daniel’s house is worth £400,000 and she turns up the notch when it comes to impressing him but it ends up going horribly wrong.

In a bid to fix it, Daisy tells Daniel she’s always wanted to be an English teacher and Daniel kindly drops some of his old books into the Rovers while Ryan is there.

Ryan is perplexed as to why his girlfriend didn’t tell him about her dream career and Daisy just accuses him of being jealous of her and Daniel’s friendship.

In a turn of events, Daniel is left panicked when he thinks Bertie has swallowed a battery out of his toy.

In the Street, Daisy calls out and offers to administer first aid, but  Daniel barks at her to get out of the way and rushes off.

Later, Daniel drops by for a drink and tells Jenny his son is fine and his scare was a false alarm.

When Jenny mentions how her son Tom’s death hit Daisy hard, Daniel apologises to Daisy for being rude and insensitive earlier.

Coronation Street airs Monday, Wednesday and Friday at 7.30pm and 8.30pm on ITV.