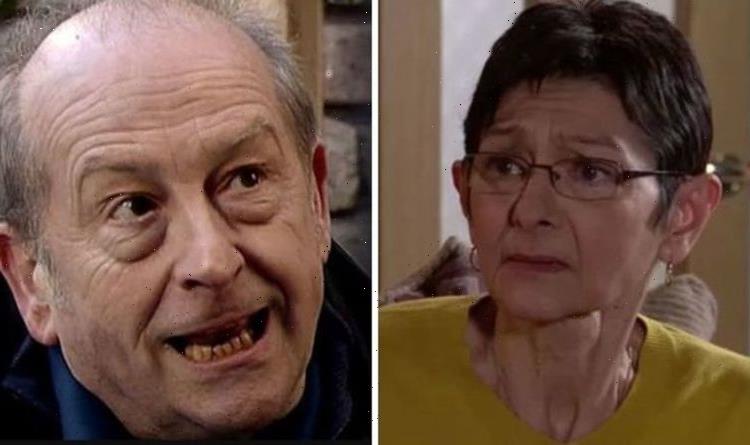 Coronation Street: Nina sobs as Roy leaves in a cab

Geoff (played by Ian Bartholomew) put former wife Yasmeen (Shelley King) through hell when he subjected her to periods of shocking domestic abuse. The Coronation Street villain died almost a year ago, but although Yasmeen has picked her life back up, his cruelty still haunts her. In upcoming scenes of the ITV soap, viewers might see the return of Geoff as he revisits his wife in flashbacks, which could lead to the restaurant owner having visions of him around the cobbles.

This sparks an idea for Yasmeen, who is keen to help in any way she can.

When she offers Stu a room, he thanks her.

However, he also makes a joke about his high cleaning standards – could this trigger some painful memories for Yasmeen?

Viewers will remember that Geoff’s coercive behaviour towards Yasmeen extended to forcing her to clean the house the exact way he requested.

He went as far as making a cleaning rota for Yasmeen and ordered her to get started.

Geoff’s controlling and manipulative behaviour went on for a long time and has understandably left Yasmeen traumatised.

During his period of abuse towards her, he forced Yasmeen to eat her pet chicken and controlled every aspect of her life.

Although she was relieved when he died, she explained how she felt she would “never be free” of Geoff.

Last year, not long after Geoff’s death, Yasmeen went through a period of experiencing frightening flashbacks.

On Christmas Day, she suffered a panic attack after being reminded of Geoff’s abusive comments.

She began to hear his voice and collapsed to the ground in fear.

Although her family have supported her through the year since he died, Yasmeen is bound to be overwhelmed at times.

Will Stu’s comment and presence in her home bring it all back for her?

The popular character seems to be getting on well lately and has dedicated herself to her work and helping out Billy at the shelter.

It’s possible though that Stu’s unintentionally triggering comments could spark a relapse in Yasmeen’s mental health, forcing her to relive her experience.

In her vulnerable state, she may begin to see her abuser appearing in random places.

Will she open up to anyone about her struggles?

Perhaps Stu will realise his comments have sparked an unusual reaction in the woman helping to keep him off the streets.

If he questions her, Yasmeen might reveal to him that she’s struggling.

Will she be encouraged to seek help?

If he makes a return to screens, viewers will be reminded just how evil Geoff was.

Furthermore, the first anniversary of his death is coming up, which is bound to stir some emotions for Yasmeen.

Could the soap revisit the storyline to demonstrate the lasting impact of domestic abuse?

When it becomes clear Yasmeen’s fear of Geoff remains even after his death, viewers will hope she will be able to get the support she needs to overcome the painful memories.

To mark a year since her nightmare seemingly ended, will Geoff make a ghostly return to the cobbles?

Coronation Street continues on Monday at 7.30pm on ITV.