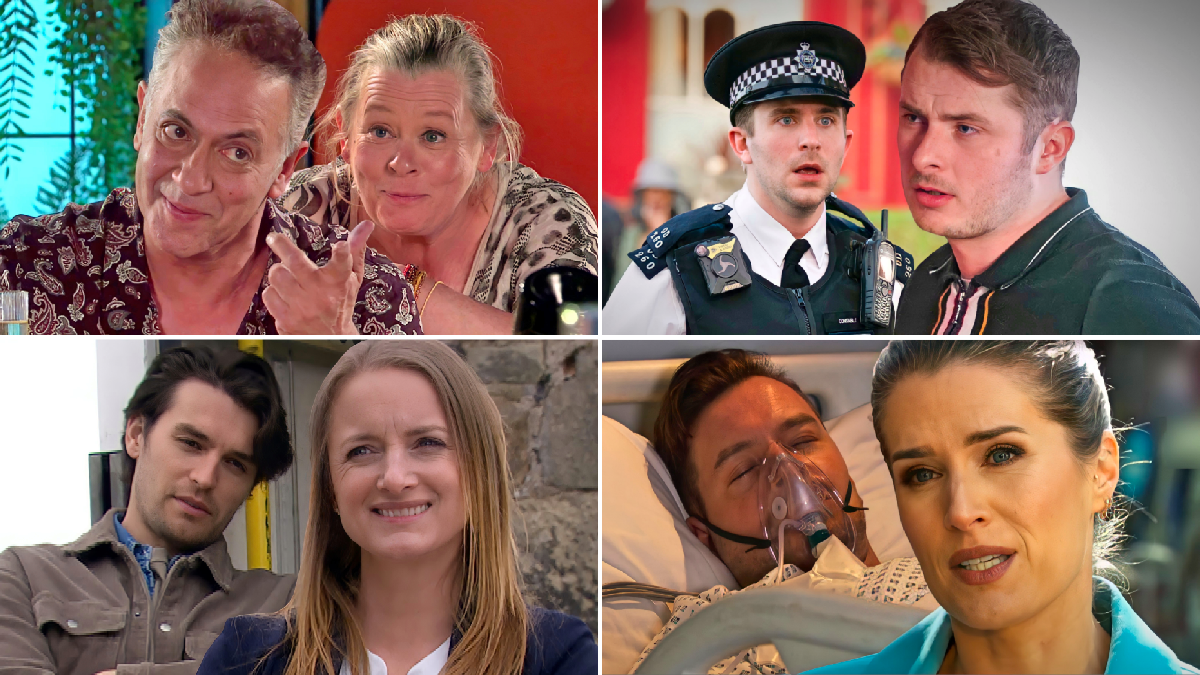 It’s that time of week once again when we bring you brand new soap spoilers – and if you like your soaps with an extra helping of drama, then you’re in for a treat next week.

Dev Alahan (Jimmi Harkishin) and Bernie Winter (Jane Hazelgrove) have fun during brunch in Coronation Street, and one thing seemingly leads to another!

Callum Highway (Tony Clay) is traumatised in EastEnders when mate and colleague Fitzy is stabbed, and he feels that he is unable to open up to Ben Mitchell (Max Bowden) about what he’s going through.

Mackenzie Boyd (Lawrence Robb) thinks all his dreams are coming true in Emmerdale when Nicola King (Nicola Wheeler) sets out to seduce him – but is all as it seems?

And Darren Osborne (Ashley Taylor Dawson) is left fighting for his life in Hollyoaks, after The Loft’s reopening goes horribly wrong.

For more information on what you can expect from the soaps next week, make sure you keep reading. You won’t regret it, we promise!

Aadi pokes fun at Dev’s love life, but Bernie comes to his rescue, claiming that she and Dev are going to brunch together. They ultimately do just that, and as they enjoy themselves, Dev suggests that they go back go No. 7 – to continue to charade!

Johnny reveals that he’s putting the pub up for sale, and Jenny is later forced to relay such information to Emma and Sean. Daisy, meanwhile, attempts to see off any potential buyers, and suggests that she and Jenny should raise the funs to buy the pub together.

Hope starts to play up, and she takes her mood out on Alina – before running into the road! Alina claims Hope did such a thing to scare her, but will Fiz believe her? Fiz later tells Tyrone he cannot see the kids until a consent order is put in place, but Ty reminds her that Ruby is his daughter – but Fiz later tells him that she’s applying for a parental consent order for Ruby! Evelyn warns Fiz that there are no winners in a custody battle.

In the wake of Ben asking him to quit his job, Callum tell him he’ll think about it. Having investigated Kat’s mugging, the policeman – while out with colleague Fitzy – spots the attacker, and they give chase. Fitzy is stabbed, and gives Callum the ring he was planning on proposing with. It’s touch and go as the paramedics arrive, and Callum can’t help but blame himself. Ben, having no idea about what’s transpired, suggests they don’t talk about work, which leaves Callum feeling lonely.

Linda is concerned that she won’t be able to hide her baby bump much longer, and claims Max needs to know. She does some digging, quizzing Denise on information regarding his whereabouts. Jack, meanwhile, has taken Abi to see Max in Paris.

Phil isn’t pleased when he sees two coppers at Kat’s, but he jumps to the wrong conclusion, as he assumes the worst about Callum. Kat, however, informs him she was mugged, and he feels terrible. He later has a proposition for her – revealing that the launderette is up for lease, and he wants them to buy it and run it together.

Jamie finds Kim’s hidden camera, forcing her to reveal that someone has been drugging her. Jamie, however, while shocked, is offended that Kim suspected him of such a thing. Later, he attempts to convince his mum to come away with him for a while

Nicola confides in Bernice about her marriage problems, and Mackenzie is on hand to offer his services – revealing that he’ll always be an option for her. Nicola soon gets glammed up, and appears to make a move on Mack at the scrapyard! Are Mack’s dreams really coming true?

Jimmy goes to Mandy for support, after realising that he and Nicola are more estranged than ever. However, he’s filled with regret when he reveals to Mandy that his feelings run deeper than friendship. Mandy urges him to fight for his marriage, but when he returns home and witnesses a row between Juliette and Nicola, he takes Juliette’s side, before telling his wife that he wants to move out.

Grace could not be more excited about the re-opening of The Loft. In fact, you might even say she’s over the moon, as Felix puts up the new sign. Fergus, however, plans on sabotaging the big the day. He’s aware that Grace hasn’t got insurance, and therefore he tells Timmy to keep a watchful eye out, while he loosens the bolts on the night-club’s new sign!

Darren ultimately comes to a decision regarding whether he wants to be with Nancy or Mandy, and thus he instructs Mandy to meet him at The Loft – which is due to re-open on the day in question. However, before he can reveal his choice between the two women in his life, the nightclub’s fancy new sign comes crashing down on him! Darren is ultimately left fighting for his life, as he’s taken to hospital, where we learn that he is in a coma.

Peri notices a text from Donna Marie on Juliet’s phone. Donna Marie begs Peri for assistance, as she’s hoping to prove to Juliet that she’s a changed woman, and claims that she’s going through rehab. However, she seemingly slips back into her usual selfish ways!