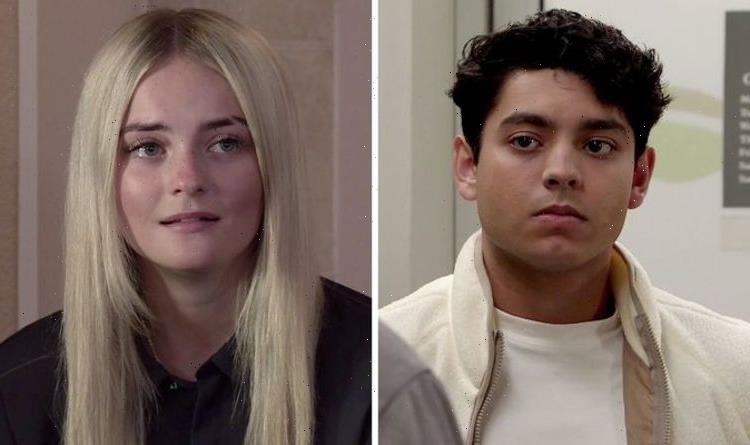 Aadi (played by Adam Hussain) feels his dad Dev (Jimmi Harkishin) favours his sister over him. Since he returned from hospital after the explosive Coronation Street car accident, he has struggled to let go of his anger towards his family, and could be plotting to make Dev’s life difficult as a way of getting back at him. Kelly (Mollie Gibson) is set to return to the cobbles, and when she’s accused of damaging Dev’s car, it seems she might join Aadi in his mission.

In upcoming episodes of the ITV soap, Aadi broaches his plans to move to London plans with Dev, hoping he’ll fund his rent.

His dad informs him that he’d rather make him a general manager of his three shops than see him move to a London firm.

When Bernie Winter (Jane Hazlegrove) tells the teenager that Dev can’t afford to bankroll his move to London because he spends all his money on Asha, Aadi’s gutted to think this is the real motive behind Dev giving him the job.

Dev takes delivery of his new car and later sees the scratch on his car, he assumes Kelly to be responsible.

She assures him she had spent the afternoon in York with a friend, but later Craig reveals Kelly’s so-called mate reckons he hasn’t been with her.

Is Kelly telling the truth? Dev reveals the police are checking the CCTV and believes it will show the youngster vandalising the vehicle.

Later, Aadi returns home and finally addresses Dev about rescuing Asha but leaving him to die in a burning car.

Dev does his best to reassure Aadi he loves him and his sister equally.

However, when his twin returns home, Aadi turns on her, yelling he has spent his life being second best to her.

Unable to let go of his anger, Aadi storms out of the house.

Meanwhile, Kelly approaches Nina Lucas (Mollie Gallagher) and Asha outside the chippy and assures them she didn’t key Dev’s car and is telling the truth about her trip to York.

A distraught Aadi ends up asking girlfriend Summer Spellman (Harriet Bibby) if he can crash on their sofa.

Aadi and Kelly strike up an unlikely friendship and Kelly tells Aadi he’s welcome to crash at her digs.

As Kelly and Aadi approach her home, her friend Cole (Tyler Dobbs) appears and threatens Kelly.

He reveals she’s inadvertently dobbed him into the police as he used their trip to York to pick up a consignment of stolen phones.

Could Aadi step in to help her? If so, the two may decide to strike up a deal to mess with Dev even more.

If Aadi explains how he feels to Kelly, she’s likely to agree to step in to help him get revenge after he helped her out with Cole.

He was hurt and furious when Asha crashed his trip with Dev to begin with, and his dad saving his sister over him added insult to injury.

Although he hasn’t yet confronted his dad about how he feels, it seems he could be silently planning a way of getting back at him.

With him no longer being under Dev’s roof, the struggling father might realise his son is serious about how he feels.

Kelly and Aadi may start by vandalising more of Dev’s things, but could it escalate?

It’s possible the two might even bring Asha into their plan.

Asha and Kelly aren’t likely to be getting on already following Seb’s murder and Kelly’s involvement, so Kelly would probably be keen to start causing trouble for Asha.

Will they end up taking it too far and land themselves in trouble?

With Kelly only just out of prison, she should probably be steering clear of any trouble, but could Aadi come as an unlikely bad influence?

Coronation Street continues on Wednesday at 7.30pm on ITV.