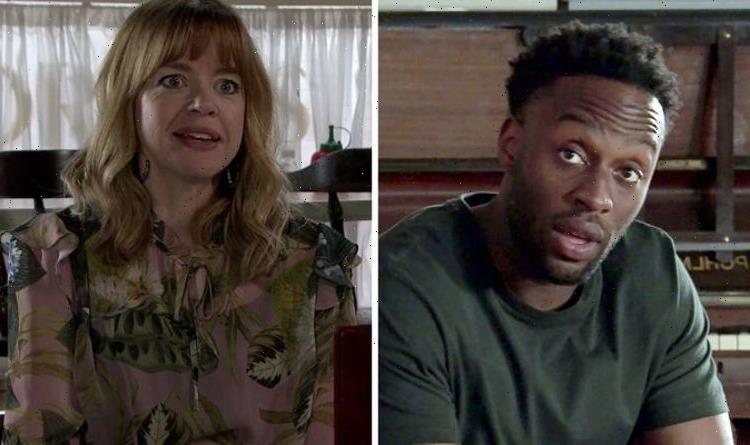 Corrie: Imran and Toyah talk about their fostering plans

Toyah Battersby (played by Georgia Taylor) and Imran Habeeb (Charlie de Melo) were one of Coronation Street’s most solid couples just a few weeks ago. However, when Toyah found herself confiding in Michael Bailey (Ryan Russell) about Imran letting her down, the pair ended up in a flirtatious exchange. Will she end up having an affair with Michael in a bid to feel wanted?

During Friday’s double-bill of the ITV soap, Imran got caught in his own web of lies when he told Toyah he could not meet her for lunch as he was “too busy” working.

Toyah was left sitting at her desk mulling over Imran’s cancellation when Michael walked in to speak with her.

He tried to start a conversation with her, but she ended up apologising for “being miles away” with her thoughts when he was talking.

Toyah then opened up to Michael about feeling deflated over Imran cancelling their lunch date due to work commitments.

She admitted to Michael that her relationship with the solicitor was “a bit tricky at the moment”.

“The trial was tough on everyone, particularly Imran,” she added.

“I wanted to take him for a nice lunch in The Bistro, but he is up to his eyeballs in work and staying at the office.

“We’ve got so little time, and so much that we need to talk about.”

Michael suggested to Toyah that it would be a nice idea to grab some food from The Bistro and take it to Imran’s office for them to enjoy.

“Even hard-working solicitors need a dinner break,” he explained.

Toyah raised her eyebrows and flirtatiously told Michael that he was a “very perceptive young man who would go far”.

Could something romantic be developing between the couple?

Later on, Toyah decided to take Michael’s advice and bring food from The Bistro to Imran’s office – but when she arrived, he was nowhere to be seen.

When Imran’s colleague told Toyah he had stepped away from work to have a drink in The Rovers, she dumped the food on his desk and stormed out of the office.

An incensed Toyah then marched her way down to the pub to confront Imran.

When she found him sitting alone at a table she demanded him to tell her what he was “hiding” from her.

mran was eventually forced to tell Toyah that he spent the night of the trial at his ex-wife Sabeen’s (Avita Jay) house, but insisted nothing happened between them.

Sabeen backed him up, but she was also intrigued as she was fully aware Imran did not spend the whole night at hers.

Will Toyah believe Imran has told the truth about Sabeen?

Or will she make a move on Michael and pursue an affair with him now her trust for Imran has vanished?