Geoff (played by Ian Bartholomew) took to the stand in court during the latest instalment of Coronation Street to give evidence against his wife Yasmeen Nazir (Shelley King), who is accused of trying to murder her husband. Little did he know, his son Tim Metcalfe (Joe Duttine) had tracked down his mother Elaine Jones (Paula Wilcox) to a hospital ward where she was being treated following an emotional breakdown. Fortunately, the father-of-one managed to convince the patient to give a testimony against his father so his step-mother could be freed from prison. However, the ITV soap villain soon discovered what had been going on and put a stop to proceedings, leaving fans questioning how he managed to confront his ex-wife.

Having been watching Elaine from the shadows, as he works as a radio presenter at the hospital, Geoff finally emerged to dish out a terrifying threat.

The villain had managed to get access to a security pass, meaning he could walk straight into his ex-wife’s ward.

As soon as she saw him, Tim’s mother was terrified, telling him “he shouldn’t be there” but his brazen attitude showed he wasn’t afraid of being caught by security.

“I’m not the one off my head, am I? You’re the one who needs to be locked up,” Geoff told the frightened character.

Locking the door to the room, Yasmeen’s husband asked the patient what their son had to say for himself, having realised what Tim had been up to. 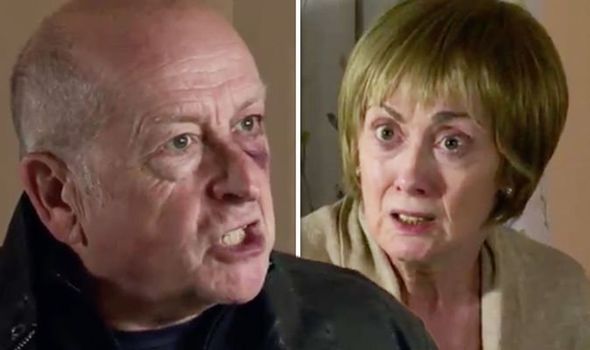 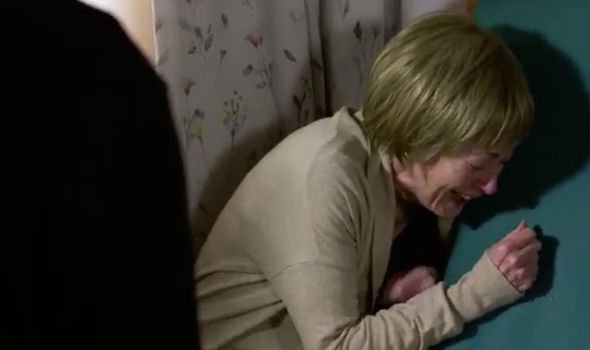 It was in this moment Elaine realised she hadn’t been going crazy and the sightings of Geoff had been real before going on to explain her son had asked her to go to court.

Manipulating the situation, the villain then tried to turn the tables of his ex-wife, blaming her for being a terrible mother.

Trying to hold her own, the terrified patient said she was going to tell the jury how abusive he had been towards her all those years ago which prompted her to leave the family home.

“You think I’m scared about you telling the truth? No, I want people to know what you were really like,” Yasmeen’s husband hit back. 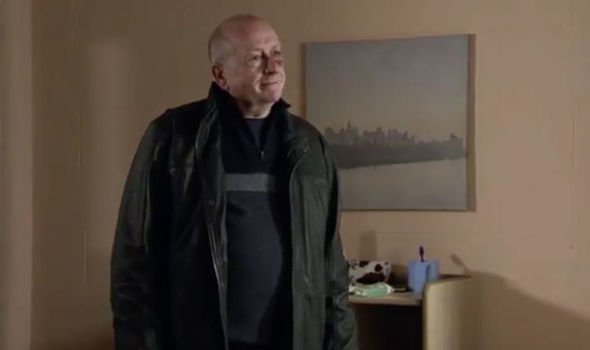 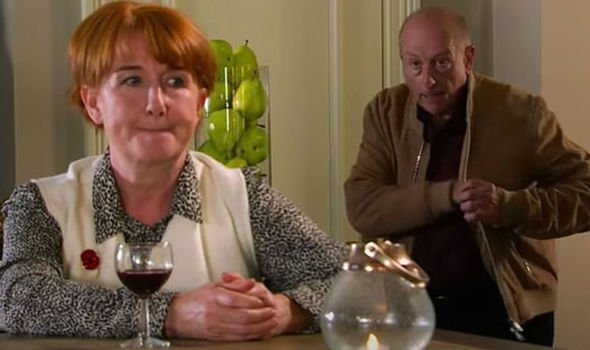 How the hell did Geoff get an entry card?

By the end of the scene, Geoff had terrified his ex-wife so much, she agreed not to go to court and rang Tim to tell him the bad news.

Those watching at home couldn’t believe how the villain had seemingly “broken into” the hospital ward and took to Twitter to comment.

One wrote: “Where is the security? Where is the panic button? Where are the staff? Ludicrous writing to think anyone can walk into a secure unit. This scene [was] very badly handled! #Corrie @itvcorrieuk.”

Another added: “So how the hell did Geoff get an entry card and where the hell were all the staff when he was banging doors and shouting? #Corrie.”

Whilst a third viewer commented on the confusion: “How did he know where Elaine was? Then have a pass to get in? #Corrie.”

“#Corrie What ID is Geoff using? His pass is not for a security hospital. If so, how did he get it?” a fourth asked.

However, a fifth explained: “For all the people not paying attention: he stole the hospital pass off his new girlfriend, who works there #Corrie.”

In recent episodes, the villain has been seen enjoying the company of a woman called Christine (Kate Wood).

The newcomer doesn’t believe her new boyfriend is abusive and said as much when she met Tim and Alya Nazir (Sair Khan) last week.

Following their date together, Geoff and Christine returned to Number Six where they discovered some uninvited house guests searching the property for evidence they could use in court.

After both her partner’s son and Yasmeen’s granddaughter tried to warn her off, it seems the newcomer was pretty smitten with her new man.

Could she be in serious trouble if the hospital realises another person has been using her credentials to wander around the hospital?