In a recent interview, Chilling Adventures of Sabrina showrunner Roberto Aguirre-Sacasa revealed that he almost changed Salem into a dog for his horror-tinged reboot of Sabrina the Teenage Witch. Sacrilege!

While the beloved feline remains intact (for the most part), Chilling Adventures… makes other sweeping changes that forgo nostalgia in favour of darkness, drawing inspiration from recent comic books instead of Melissa Joan Hart’s wacky show from the ’90s.

Set in the town of Greendale “where it always feels like Halloween”, Aguirre-Sacasa’s revival kicks off just a few days before Sabrina (Kiernan Shipka) turns 16, when she must choose between life as a witch and her connection with the mortal world. Although she’s determined to study magic, Sabrina’s love for high-school squeeze Harvey Kinkle (Ross Lynch) is complicating matters somewhat, not to mention the demonic forces that conspire against her too.

The various elements that usually characterise Sabrina are still present here, but by the time that the pulpy opening credits have finished, it’s clear that the Teenage Witch is grown up now, even if she does still attend Baxter High. With no plans to include the original cast in cameo roles or even connect with its sister show Riverdale, Chilling Adventures of Sabrina consciously disassociates itself from what’s come before, and that’s one of its greatest strengths.

Most TV shows and teen programmes in particular can take a while to shrug off their growing pains and find themselves, but the pilot for Chilling Adventures of Sabrina hits the ground running like it’s being chased by the Dark Lord himself. Although each episode runs close to the hour mark, none of the pacing issues usually associated with Netflix originals are to be found here.

‘Normal’ characters from Baxter High are occasionally sidelined in favour of their more fantastical counterparts, mirroring Sabrina’s own struggle to choose between the world of magic and the realm of mortals. However, a balance is maintained for the most part and each cast member is still given time to shine throughout the first eight episodes we were made privy to. 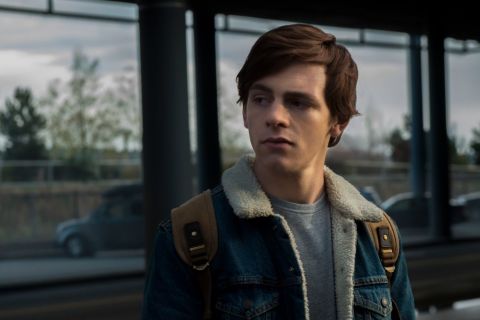 On the human side of things, Lynch pulls off an impressive 180, bringing a sweet, doe-eyed innocence to the role of Harvey, which is leaps and bounds away from his portrayal of a serial killer in My Friend Dahmer. Jaz Sinclair and non-binary star Lachlan Watson both impress as Sabrina’s besties too and Ambrose Spellman (Chance Perdomo) adds even more queer diversity to the cast in the role of Sabrina’s pansexual cousin.

It’s just as well that the charming young necromancer is on hand to give Sabrina advice, as the sassy Salem of old is no more. Although Sabrina can converse with her familiar, the show effectively silences Salem in a bold move that might disappoint fans from the ’90s, but helps ground the story nonetheless.

The silence left in Salem’s wake is filled admirably by Sabrina’s aunts, who share a complicated and yet always entertaining love/hate relationship. More often than not, Hilda (Lucy Davis) and Zelda Spellman (Miranda Otto) threaten to steal every scene they’re in – “Praise Satan!” – but fortunately, Kiernan Shipka still draws focus with a bewitching performance in the lead role.

The Mad Men star was Aguirre-Sacasa’s first choice and it’s easy to see why. When she declares that “My name is Sabrina Spellman and I will not sign it away,” you truly believe that Shipka is Sabrina, perhaps even more so than Melissa Joan Hart, who first made the Teenage Witch a household name a few decades ago. 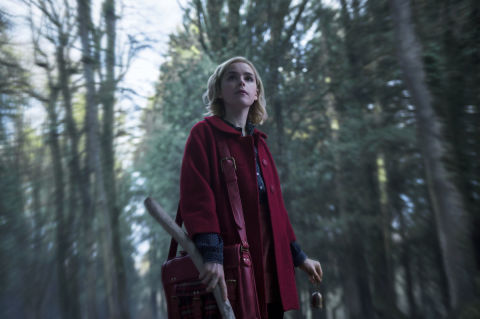 Both kind and outspoken, loving yet strong, this new iteration of Sabrina is the most complex we’ve seen so far. To Shipka’s credit, the young star successfully keeps a handle on these various contradictions to embody a fully rounded character who we can’t help but root for, even when she’s terrorising her headmaster with a small army of spiders.

If Riverdale occasionally dips a toe into the realm of horror, Chilling Adventures of Sabrina throws itself headfirst into the murky depths of Sweetwater River, channeling the satanic movies of old to create some genuine “Holy shit!” moments that you might not expect from a show like this. A disturbing makeout session in the mines and an entire episode inspired by The Exorcist are just some of the scares that lie in wait for viewers this Halloween, but that doesn’t mean Chilling Adventures of Sabrina doesn’t know how to have fun too.

This is best encapsulated by Mary Wardell, aka Madam Satan, a demonically possessed teacher who works for the Dark Lord and befriends Sabrina under false pretences. Doctor Who star Michelle Gomez gives a performance on just the right side of zany here, providing some laughs with her odd, manic looks… That is, when she’s not systematically trying to destroy Sabrina’s life.

Melissa Joan Hart previously compared the reboot to Buffy the Vampire Slayer, explaining that while her show “was about magic and family”, the new one “is going to be more about witchcraft, dark stuff”. While the Buffy comparisons are remarkably apt in terms of both quality and potential impact, Hart’s description is still lacking in one key regard. 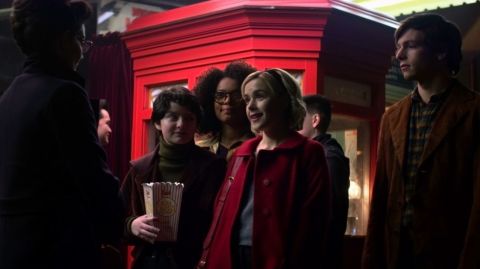 Yes, Chilling Adventures of Sabrina is darker, tackling timely issues of misogyny and discrimination with as much vigour as Sabrina defies Satan himself, but the reboot is also about family too. Not an episode goes by where the loss of Sabrina’s parents doesn’t affect her in some way, and the bond that the Spellmans share is far more powerful than anything that the Dark Lord can throw their way.

A few months back, talk of a Buffy revival worried fans who felt that a new project could tarnish the legacy of the original. Whether these concerns turn out to be true or not, Chilling Adventures of Sabrina has proved that supernatural reboots can sometimes surpass their predecessors – and if season two turns out to be as strong as season one, then perhaps we’re looking at a show that could even rival the legacy of Buffy the Vampire Slayer somewhere later down the line too.

Chilling Adventures of Sabrina will stream exclusively on Netflix from October 26.