Celebrity Gogglebox returned to screens on Friday night with a number of famous faces joining the regular stars of the show for a special episode to raise money for the Stand Up 2 Cancer charity. Adrian, 62, was joined on the sofa by his Line of Duty co-stars Vicky McClure, 37, and Martin Compston, 36, who were very excited to be taking part on the Channel 4 show. However, the Ted Hastings star looked very relaxed to be reviewing some gripping television and those watching at home couldn’t help but pass comment on the actor constantly sneezing. 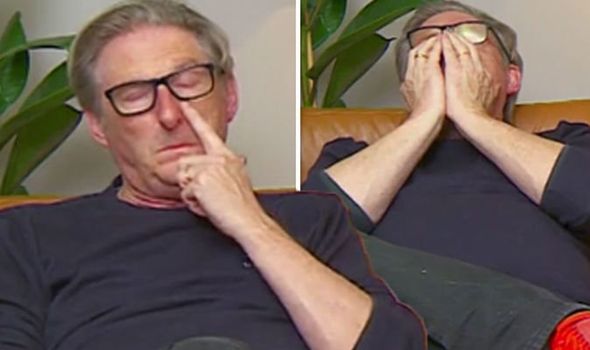 The moment came when Vicky and Martin were trying to talk to one another, but Adrian’s sneezing kept putting a stop to their conversation.

Viewers were in hysterics and took to social media to comment, with one writing: “The only thing Adrian Dunbar has done so far is sneeze. #Gogglebox.”

Another posted on Twitter: “Adrian Dunbar sneezing is apparently one of the funniest things I’ve ever seen #Gogglebox.”

Others were mesmerised by how solemn the actor looked, with a fourth commenting: “Adrian has hardly said a word #gogglebox.”