Omo, played by former EastEnders star Ellen Thomas, has schizophrenia and will be brought into the ED by her grandson Blake after their day out goes horribly wrong.

As old wounds are reopened, Jacob is forced to confront his extremely difficult past as he finally opens up to Elle and Blake about his difficult relationship with Omo.

Digital Spy recently caught up with Charles Venn – who plays Jacob – during a break from his Strictly Come Dancing training to chat about tonight’s sad scenes and find out what’s next for his character after this.

Why has Jacob never told anyone about Omo’s illness?

“When Jacob was young and Omo was going through this, he didn’t know much about it. He even mentions at one point in the episode how they didn’t have a name for the condition back then. He just assumed it was just a thing his mum went through and he just accepted it. He says to Elle at one point, ‘Why do you think I spent so many nights at yours?’. He stayed over at hers but he didn’t want to say anything – it was something he wasn’t very comfortable talking about.

“Over time, he has just decided that it’s too much to cope with. When he was teenager and old enough to move out, he realised that he needed to stick around. He upped sticks and has rarely seen his mum since. He thought it was best to keep his distance from her.” 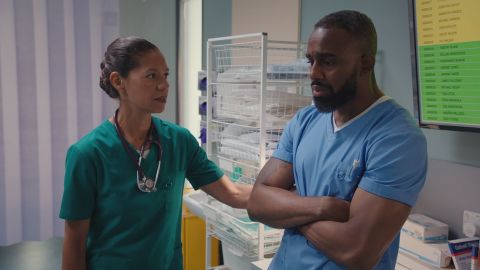 What is his reaction when he first sees Omo in the ED?

“Shock – absolute numbing, arresting shock. She is the last person he expected to see, especially at his place of work. The last time they met up, it wasn’t a very good experience – it was a bad meeting as she had another breakdown. She is convinced that her son is going to hurt her, and despite all his promises and assurance that he isn’t, and that he loves her, her mind isn’t wavering. She is adamant that he’s going to cause her harm.

“When the last encounter happened, he decided that was it and he knows it’s best to keep away from her. So when he does see her, it’s total surprise. It really takes him aback.”

Is this going to explain more about why Jacob is the way he is?

“However, he did also go on the wrong side of the tracks and became a rebel because he didn’t have the guidance that was required – his mum wasn’t able to do this. He did go off the rails for a time but ultimately decided to try and make a difference. He wanted to show younger people how to stay on the right tracks and so decided to go down the medical route and become a nurse.” 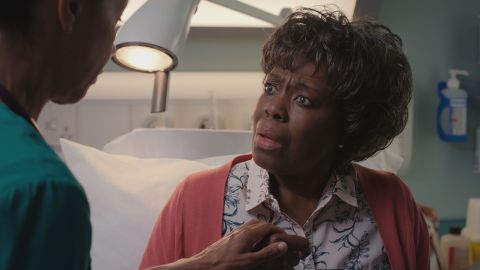 Have you enjoyed exploring Jacob’s backstory?

“Yes, very much so. There is so much to Jacob. When he was younger, he had a lot of people he looked up to who weren’t necessarily responsible people – he was around bad guys, and for a time, he was bad himself. He knows those people and lots of those people chose to stay in that environment and are now dead, or in jail. Some of them chose to change their life but unfortunately not many. There is now talk of us going back and having Jacob revisit his former stomping ground and meeting some of these people. There’s talk of us going down that route with his story in the future.”

Would he like to rebuild a relationship with Omo?

“It’s not possible at the moment. After what happens in the episode, it’s a very tough ask to try and rebuild a relationship. She is very, very sick and needs a lot of help, and until that point comes, it’s never going to feasibly work. There are moments where you see this wonderful mum in her, and Jacob softens when he sees it too, but it’s very momentary. It’s a very difficult set of circumstances.”

“She’s amazing and such a fantastic actress. She’s recently won an award for her contribution to acting. There were a lot of people on set, saying ‘Have you seen Ellen Thomas? She’s just delivered an incredible performance’. And when I was doing those scenes with her, I was blown away. I’ve worked with her before but nothing prepares you for that kind of moment. I’ve never seen her play someone like that before. She made it almost easy for me to play off. It was frighteningly intense.” 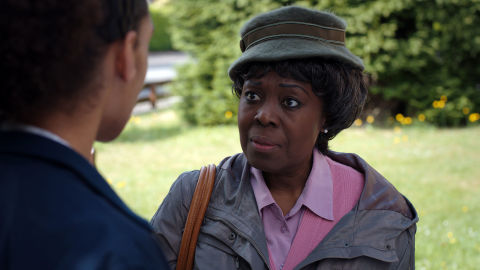 Would you like to see him reunite with Connie?

“Yes absolutely. That was a love affair and a very popular relationship – Jacob hasn’t had that before. What we saw with the late Sam Nicholls was an affair, but with Connie, that was a relationship. You saw the pain when they broke up and it’s almost like it became an all or nothing situation. They were either together or they don’t interact at all. These days, they are respectful to each other but they keep out of each other’s way. I have fans asking me everyday if they are going to get back together but I am a strong believer of never say never. We await the day that does eventually happen. It will be part two of Jonnie.” 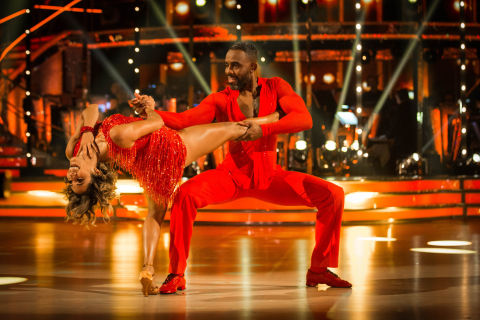 How is it going at Strictly? Have you experienced any training injuries yet?

“I wouldn’t go as far to say I’ve got a training injury, but I’ve got a very sore shoulder, an aching achilles and my knee feels like it’s sleeping every so often – I have to keep waking it up. It’s all these types of things; you just ache all over. I said this to Karen and she said, ‘Welcome to the dance world!’. You experience these things on a daily basis and just get used to it.”

Is there any rivalry between the contestants or are you all getting on well?

“Everyone is so supportive of each other, it’s such a beautiful thing. During the run through, we have a big screen in the green room and we get so excited when we see each other improving and their progression from the last week. It’s a lovely thing to see. We will continue to encourage and support each other. There will be never be any hampering, trying to dissuade or distract each other at all – not within the Class of Strictly 2018. It’s not happening! But of course we know it’s a competition, and whoever goes is going to go. We will wish them all the best, but me and Karen are just praying it isn’t us!

How are you juggling your Strictly commitments and Casualty filming?

“No sleep, meditation, and a lot of ice bags! I’m trying to juggle the script reading while going through the dance steps. I am waiting for them to ease up on my scripts and filming schedule. It’s really hard work.”

Casualty airs tonight at 8.35pm on BBC One.

Next post I pledged loyalty to Bin Laden, then spied for MI6